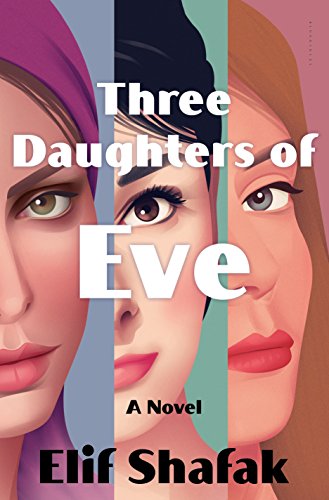 Turkey in the modern world is a diverse, complicated, and struggling nation, one that Shafak again masterfully depicts in her new novel Three Daughters of Eve. However, not just content to paint a picture of her native Istanbul, Shafak juxtaposes it with the very different climate and culture of England’s Oxford.

At the same time, not just content with painting one rich character in the form of Peri, the heroine, she juxtaposes her with two other young women: Shirin and Mona. Together, the girls make up the three daughters of Eve.

Told in a dual timeline—the present and 1990s/early 2000s—the novel moves fluidly from past to present without any sense of jarring or disturbing the reader. Peri is a modern Turkish woman, a mother of teenagers, a housewife, and a charity supporter. After a disturbing incident in the streets of Istanbul where she is mugged and almost killed, she arrives flustered to a dinner party of the crème de la crème of the city’s residents. Her mood is one of introspection, and the dinner conversation is one that leads to further ruminations. She thinks back to her life growing up in Istanbul and then moving to Oxford for higher education, and a scandal.

Shafaq has masterfully created equally lush portraits of warm and complicated Istanbul and cold and collected Oxford. Peri’s parents are symbolic of the clash between Istanbul’s mix of modernity and religiosity, liberalism and conservatism. Her mother is a religious zealot, while her father is a liberal drunk, and in their heated interactions we see the struggle Turkey itself is going through.

“All the same, this city bordered on Europe. Such closeness had to amount to something. It was so breathtakingly close that Turkey had put one foot through Europe’s doorway and tried to venture forth with all its might – only to find the opening was so narrow that, no matter how much the rest of its body wriggled and squirmed, it could not squeeze itself in. Nor did it help that Europe, in the meantime, was pushing the door shut.”

Peri grows up in the shadow of these powerful personalities, always questioning God and never standing up for anything. She searches for meaning in everything, including trying to decide which version of God—her mother’s or her father’s—was the correct one.

“God was a maze without a map, a circle without a center; the pieces of a jigsaw puzzle that never seemed to fit together. If only she could solve this mystery, she could bring meaning to senselessness, reason to madness, order to chaos, and perhaps, too, she could learn to be happy.”

In Oxford, she finds herself attracted to Professor Azur, a teacher who is controversial because of his seminar “God.” She also befriends two other girls. Shirin is Iranian British, and very much against Islam. Mona is a hijabi Muslim by way of Egypt, and is ferocious in her anger against Islamphobes. Together, the three daughters of Eve make up the Sinner, the Believer and the Confused.

Oxford itself is a symbol for the quiet Peri longs for, so vastly different than the city she grew up in. “The first thing that struck Peri about Oxford was the silence. That was, and would remain for months to come, the one peculiarity she found hard to get used to—the absence of noise. Istanbul was unashamedly boisterous, day and night; even when one pulled down the shutters, drew the curtains, put in earplugs and pulled the blanket up to one’s chin, the din, barely weakened, would penetrate through the walls, seeping into one’s sleep. The last cries, of street-hawkers, the rumbling of late-night lorries, the sirens of ambulances, the boats on the Bosphorus, the prayers and the profanities, both of which multiplied after midnight, would hang in the wind, refusing to disperse. Istanbul, just like nature, abhorred a vacuum.”

Three Daughters of Eve is a marvelous lesson in multiculturalist angst, the clash between modernity and tradition, and the vicissitudes of personal struggle. A must-read that entertains and informs without preaching.