Three Drops of Blood and a Cloud of Cocaine 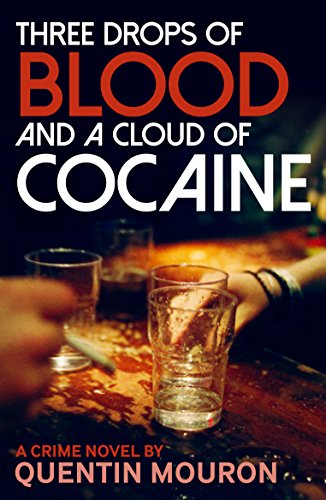 “Three Drops of Blood and a Cloud of Cocaine is Quentin Mouron’s English-language debut, and what a debut it is.”

Night has fallen quietly on Watertown, Massachusetts, and Jimmy Henderson, a 70-year-old retiree, is sitting in his black Ford pickup on the corner of Parker and Mount Auburn, relishing his last slice of pizza from the box. Apart from the usual garbage strewn inside the pickup, nothing is remarkable with the exception of a “hunting” gun—a Winchester 12 pump-action shotgun—leaning conspicuously against the dash.

From his rearview mirror, Jimmy is keeping his eyes firmly focused on the one-time First Baptist Church building, now converted into mid-range apartments that are much coveted by neighborhood families.

After some time slips by, Jimmy decides he has seen enough for tonight, flicks on the vehicle’s headlights, and is about to drive off when he notices the figure of a man walking toward Mount Auburn from the end of Parker Street. Jimmy figures he isn’t the sort of man you expect to come across in Watertown: too impeccably dressed. Jimmy figures him for about thirtyish, good-looking with thick black hair. As the man comes closer, a glint of recognition flickers in Jimmy’s eyes. Or is that fear?

“Good evening,” stammers Jimmy. The man gives a slight bow. And much more.

Within a deadly flash of life, Jimmy has been mutilated, eyes slashed, cheeks gashed up to the ears, and tongue sliced off, all in a caustic air of unanticipated irony: the last slice of pizza consumed minutes ago really would turn out to be Jimmy’s last.

The town’s sheriff, Paul McCarthy, soon takes charge of the murder investigation. McCarthy had known Jimmy for over 30 years as a neighbor, and is shocked by the ferociousness of the slaughter.

Puzzlingly, an initial search of the pickup reveals that nothing seems to have been stolen:

“Why? For pity’s sake, why? The sheriff is wondering about the wallet found in old Jim’s jacket, his hunting rifle and ammunition, the truck with the keys in the ignition. Why hadn’t the killer taken anything? It can’t have been he was in a hurry or that he panicked, as he stayed around long enough to mutilate the corpse. No, if he didn’t steal anything it was because he didn’t need to, because it didn’t interest him. Well then, wonders McCarthy, what does interest you, you sonofabitch?”

So robbery is ruled out—for now, at least. However, despite no motive clearly emerging, there is a suspect: Alexander Marshall, a local drug dealer and thug with a penchant for violence against women, who also just happens to have attempted murder on his curriculum vitae of crimes.

At one time, Marshall lived with Henderson’s daughter, Laura. While living in the house, he sexually abused Laura’s young daughter. Talk on the street was that Jimmy was gunning for Marshall, but had Marshall turned the tables and got in first? Possibly and very likely, thinks McCarthy who could easily set up the pervert for what he did to the child. However, that is not McCarthy’s modus operandi, preferring the book of law to take its course for justice.

With old-fashion but relentless police work, McCarty is soon picking up little breadcrumbs of clues. However, worryingly for him, the more clues he finds, the darker and bloodier the case and crumbs start to become.

Into this murderous mix of a nightmare, comes the mysterious enigmatic young private investigator Franck, allegedly visiting from New York.

McCarthy’s a church-going, much-loved family man with wife and kids. He desperately tries walking a precarious tightrope of keeping a boundary between the sordidness of his investigations and his private life. He is also a man trying to keep faith in human nature and the order that should prevail in the world.

But Franck is a different sort of breed, a man always rushing to the bathroom for another line of coke, reveling in the darker workings of the case. And what is his real reason for being in Watertown? When the two men finally meet the entire existence of the sheriff as a righteous family man—and probably as a police officer—will be turned on its head, as he begins to question his very sanity.

Three Drops of Blood and a Cloud of Cocaine is Quentin Mouron’s English-language debut, and what a debut it is. Disturbingly violent, yet never gratuitous, it is perfectly balanced with wondrous prose and original one-liners. Mouron has created a truly memorable character in Franck, who is anything but the archetypical PI. No, he is something special. Very special indeed. Think Anton Chigurh, Cormack McCarthy’s frightening psychopathic killer from No Country for Old Men, but with dark, sinister humor added to his psyche. If he’s not in the next Mouron novel, it would be a crime.