The Thread Collectors: A Novel 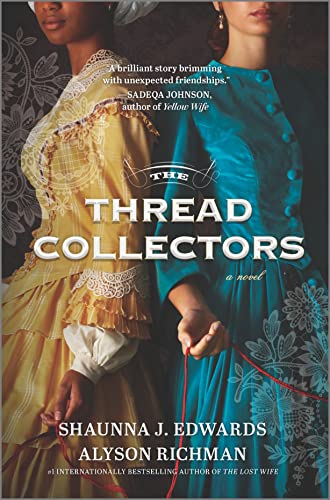 “The era, the landscape, and the people are etched in fine and imaginative detail. The plot has many threads that weave together, making The Thread Collectors a satisfying historical novel.”

On a March night in New Orleans, Louisana, in 1863, against the backdrop of a city “on the precipice of chaos, barely contained by Union forces occupying the streets,” William whispers farewell to his lover, Stella, in her Creole cottage. He is dressed to run; they exchange talismans, a shell for her and a handkerchief for him. Stella has embroidered a single violet with a thread taken from the bottom of her skirt. Both are slaves of a man named Mason Frye, who is scheduled to return from the Confederate army at any time.

The next day, using the embroidered “map” that Stella has provided, William arrives at the army camp, the training spot for the new Louisana Native Guards, whose ranks are filling with Black soldiers. William is fit to serve and enlists. His skill: He plays the flute. Here he meets Jacob Kling, a young soldier from New York, also a musician, who has mastered the trumpet and the cornet. The two are quickly united when Jacob, who has loved and played music all his life, hears the excellent notes of William’s flute. They seem destined to serve together and do so as the band at the front of the army that leads the soldiers whenever they go into battle.

The story alternates back and forth between Jacob and William at Camp Parapet Louisana, and Stella in New Orleans—and through letters from Jacob’s beloved, Lily. In this way, many personal realities of the era are explored; Stella is the concubine of her owner Mason Frye who himself is in the Confederate army; and Lily is a Jew from New York, who crafts quilts, rolls bandages, and attends abolitionist activities for the North. Both women in this way work toward the liberation of slaves. In the midst of this, Frye returns home and reveals movements of the Confederate army, information which Lily uses to create maps of strategic information on scraps of material, hand sewn with precious threads, unravelled from clothing.

The novel derives its inspiration from the background of both writers, (one who is Black and the other white and Jewish) whose family histories suggested the fictional characters. It’s also taken directly from the events that were unfolding during the war, pitting family members against each other and leaving thousands of men dead and bleeding in the fields. A letter from Jacob recounting events of the Port Hudson battle in Louisiana is especially poignant, as the bodies of these black soldiers were left in the open fields to decompose after they had been sacrificed for their white counterparts. The widespread anti-Semitism, as much as the hatred for negroes, were both important attitudes to remember from the history of the Civil War.  Incidents such as the burning of the Colored Orphan Asylum in New York City by angry white men and Lily’s pilgrimage through the field hospitals are telling. Both Jewish and Black soldiers came to fight in the war following upon their own histories.

The era, the landscape, and the people are etched in fine and imaginative detail. The plot has many threads that weave together, making The Thread Collectors a satisfying historical novel.

All four major characters passionately risk their lives for freedom and for their beloved. The plot, complex and rewarding meanders almost as much as the characters but comes together richly in the end.