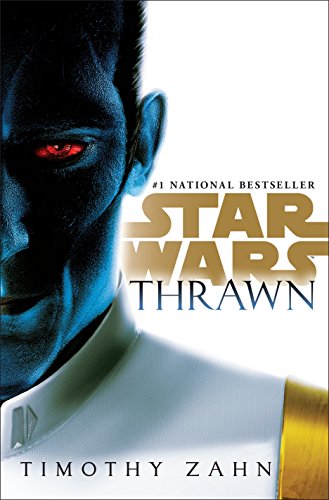 The Star Wars franchise, with its blockbuster feature films, Disney animated series, and bestselling novels, needs no introduction. Nor does Timothy Zahn, the author of more than 40 science fiction novels. To their immense fandom the publication of Star Wars: Thrawn is nothing more or less than another slice of the same sweet, juicy pie they can’t seem to get enough of. After all, this is Zahn’s 12th Star Wars novel and his eighth featuring Grand Admiral Thrawn. For Del Rey Books, an imprint of Penguin Random House, it’s pretty much another day, another bestseller.

The question that arises, however, is not necessarily whether the fan base will be happy with their tasty new product—they will be, guaranteed—but whether this new offering in the already-dense Star Wars experience will actually help to grow that base by appealing to readers who haven’t yet gotten around to any of the previous novels.

Star Wars: Thrawn presents the back story behind the rise of the blue-skinned, red-eyed military mastermind from the Chiss Ascendancy who becomes Emperor Palpatine’s primary tool to destroy the rebellion in the Lothal sector, as chronicled in the third season of the animated series Star Wars: Rebels.

The events in the novel occur, according to the handy timeline provided at the front of the book, in the period between the movies Revenge of the Sith and Rogue One, the latter taking place just before the original film that started it all, Star Wars: A New Hope.

Zahn also takes this opportunity to work with a subplot covering the origins of Arihnda Pryce, who rises from obscurity as the daughter of mine owners to governor of the Lothal sector and adversary of the rebels in season three of Star Wars: Rebels. The Pryce storyline works well with the primary thread covering Thrawn by fleshing out the political side of the struggle between the Empire and the growing insurgency as a complement to the military side of things. It also provides insight into the background of the relationship between Thrawn and Governor Pryce.

But back to our original question. If a reader with little or no previous interest in the sprawling Star Wars saga picked up a copy of this novel, would it hold their attention and interest long enough to read it through to the end at a minimum and perhaps even send them looking for other novels in the franchise as a bonus?

Timothy Zahn is an accomplished storyteller who draws readers into his imaginary universe without effort. His plot is episodic in nature, following a sequence of events that describe the progressive rise of his main characters to prominence. This tactic, familiar to readers of Zahn as far back as his eminently readable Cobra (1985), is very easy to follow and holds our interest from chapter to chapter.

His characters, not only Thrawn and Pryce but also Ensign Eli Vanto, Thrawn’s trusted aide, are simple, basic figures who are quite accessible to readers not already familiar with them. Their motivations are easy to perceive, even when kept mysterious as they are with Thrawn, and Zahn succeeds in developing them as sympathetic and engaging protagonists despite the fact that it’s understood they are “bad guys” in the greater scheme of things.

Zahn’s narrative style is likewise uncomplicated and reader friendly. He avoids the sort of science fiction jargon, technical gobbledygook, and obscure references that often clutter novels in this genre and simply tells his story. He develops a good flow from the opening chapter and keeps it moving in a steady pace throughout the tale.

In short, the answer to our original question is yes: Star Wars: Thrawn is a fun-to-read, entertaining adventure that not only does justice to the sprawling empire that is the Star Wars franchise but should also pull new readers into its considerable gravity well where they will inevitably reach out for more.