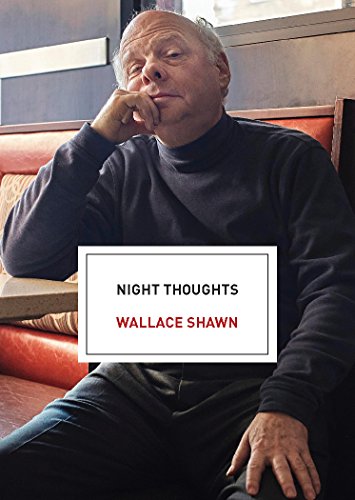 Wallace Shawn is, by his own admission, a lucky man. Through no particular talent or effort on his part, he wound up on the privileged side of the class divide. As Shawn sees it, it is the lucky versus the unlucky. Other binaries appear that give the books its broad contours: night versus day; morality versus immorality; life versus death; civilization versus the uncivilized. Shawn’s narrative structure very much trades in a dark/light motif that cuts decidedly to the noir.

The book begins like riffs of free-form jazz: murder; decaying American hotels and neighborhoods; ISIS; Donald Trump; power and megalomania; nights when our ancestors whisper to us; privilege through prep schools; appreciation of the arts; climate change; the downward mobility of the privileged class; Mom and Dad.

As an acclaimed artist in a range of genres from film to theater to writing, Shawn knows he is setting us up. Where is this all going and to what end?

We know early on what keeps Shawn up at night during those dark, quiet moments where he does not have the luxury of regimes of distraction through books, the arts, good restaurants, and doing laundry. At base it is human frailty and vulnerability (the unlucky) who must endure against those with the power exploit, control, and abuse (the lucky). The latter complicates Shawn’s own subject position in the telling of this tale.

Really big ideas are then introduced.

Morality is drawn into those complications for it is not just about social justice, but it can also serve to insulate the privileged. One can take the social justice high ground, after all, while still benefitting from the very forces against which one ostensibly fights.

Civilization is interrogated as a possible, devastating mistake: Beethoven with a side of slavery and exploitation. Speaking of the ancient city of Thebes and the kings that made it a place of splendor, Bertolt Brecht critically notes: “Did the kinds carry on their own backs those massive fragments of stone?”

Power serves as an ideological script that rationalizes domination and subjugation. And those with resources and power seek to maintain and pass it on to their kin and kind at all cost. The process of excess accumulation and the inequality it breeds knows no end. Lucky people expand by filling the space their luck has given then while unlucky people are silenced—but with the potential for sudden, violent, and unpredictable reaction.

About midway through the book, Shawn takes a pivot away from free-form storytelling and begins to weave his ideas together. The core theme that brings the diverse notes of the book’s opening is civilization and its discontents.

We take a deep turn into Islamic bin Ladenism that reveals a nuanced view of Shawn’s object of fear as a movement borne out of poverty, desperation, and colonialism. He explores how British, French, and American responses all try to colonize it. The British attempted to use teachers – religious or otherwise – to win over the minds (and hearts) of Muslim youth. The French took an anti-religion, anti-Islam approach (let’s ban all things Muslim starting with hijabs and burkinis). The Americans have taken a jails (domestic) and bombs (international) tack. “The truth is,” Shawn underscores, “ that once unlucky people come to understand how unlucky they are, it’s too late for the luck.”

Enter climate change and the Anthropocene in the form of 2012’s Hurricane Sandy as it flooded New York’s streets. This “natural” event serves to show how easily the artifice of privilege and invulnerability can be stripped away by physical (and human-made) events. What started as a lark—“get out the good candles . . .” —sank into fear: “a lifetime’s worth of assumptions were uncontrollably unspooling . . .” Books, music, and restaurants are of little use when the lights of civilization are off and the temperature is plummeting.

Climate change has ushered in an era where there is a very real possibility for humans to create a set of unstoppable dynamics where we are the serial killer of ours and other species. Shawn observes in the books opening passage that the murderer often doesn’t know why s/he did it, or they plead that they can’t remember what happened. As a species, he contends, we are a dangerous lot.

At base, Shawn contends, we have little self-awareness or reflexivity. Indeed, those qualities diminish with increased power, control, and authority, and are replaced with equal amounts of self-deception and hubris. (I dominate therefore I must be better.)

In the end, the unlucky are pretty well stuck and cannot transcend their circumstances, and the lucky are complacent with their privilege. The shocking thing isn’t that there are some truly despicable people whom, through a complex combination of personality and material circumstances, use their power in highly destructive ways. Far more tragic is how the lucky often throw their privilege away, eschewing education and pursuing simple, unchallenging, and banal pleasures.

Liberal education may be the utopic path that could help humans grasp and act on the dire circumstances they have created. For it seeks to expand human capacity—an enhanced and expanded self—that is empathetic and able to understand moral outcomes, puts checks on the excesses of civilization, embraces diversity, and places collective well-being over profit. Uncle Vanya would, undoubtedly, approve.