Those Glamorous Gabors: Bombshells from Budapest 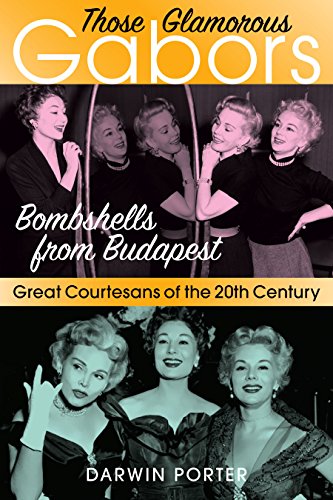 Once upon a time, in the faraway kingdom of the Magyars, there lived a woman who had three daughters. This woman was very, very wise and knew well the cost of diamonds and the ways of the world. And she looked upon her daughters and her ample bosom swelled with pride.

One daughter, she saw, was a great beauty who was soon named Miss Hungary. And once more her mother was proud. A second daughter married well and became the Countess of Warsaw and told her sisters to refer to her as “Her Excellency,” and again the mother was proud. The third, the youngest and blondest of the three girls, seeing that her homeland seethed with turmoil as the world prepared for war, quickly married Garbo’s chiropractor and fled to the mythical land called Hollywood. And that made the mother proudest of all.

And as she boarded the Cunard liner The Queen Mary, the youngest and blondest of the girls suppressed a chill as she clutched tight to the gift that enveloped her, a castoff mink coat that her mother had given her along with her blessings. And the girl stood on the deck facing westward to the New World.

“I was a pauper in mink,” she sighed, years later, as she remembered that day for the nice reporter sitting next to her.

Given the fact that the vast majority of us have never lived in a Gabor-free world, it is hard to image what that joyless place might be like. Because despite what any number of Hiltons or Kardashians or even Real Housewives might tell you, no other family has so contributed to Western pop culture as have the Gabors, with a reach extending from the years preceding World War II to the present day.

And for that reason they are now being rewarded with the longest, most exhaustive, most salacious of family biographies, Those Glamorous Gabors: Bombshells from Budapest.

Be warned, Gabors is both an epic and a pip. Not since Gone with the Wind have so many characters on the printed page been forced to run for their lives for one reason or another. And Scarlett making a dress out of the curtains is nothing compared to what a Gabor will do when she needs to scrap together an outfit for a movie premiere or late-night outing.

Garbors is a work festooned with diamonds, rubies, minks, and ermines, champagne, caviar, and talk shows and game shows and B movies like Arrivederci Baby! and husbands (their own and other people’s) and lovers and sexy sex and sexy lies and sexy secrets galore. The author has a particular penchant for “outing” Hollywood lesbians, of whom there seem to be a great number, from the aforementioned Garbo to Marlene Dietrich to Barbara Stanwyck to Tallulah Bankhead to Agnes Moorehead . . . so much so that a sort of Gabor-fatigue sets in around page 500 (about when a Gabor Sister Act is ready to open in Vegas).

But I promise you this: You will never be Ga-bored.

For those not up to speed, Jolie Tilleman came from a family of jewelers and therefore came by her love for the shiny stones honestly, perhaps genetically. She married Vilmos Gabor somewhere around World War 1 (exact dates, especially birth dates, are always somewhat vague in order establish plausible deniability later on) and they were soon blessed with three daughters: Magda, the oldest, whose hair, sadly, was naturally brown, although it would turn quite red in America; Zsa Zsa (born “Sari”) a natural blond who at a very young age exhibited the desire for fame with none of the talents usually associated with achievement, excepting beauty and a natural wit; and Eva, the youngest and blondest of the girls, who after seeing Grace Moore perform at the National Theater, decided that she wanted to be an actress and that she would one day move to Hollywood to become a star.

Given that the Gabor family at that time lived in Budapest, Hungary, at the period of time between the World Wars, that Hollywood dream seemed a distant one indeed.

The story—the riches to rags to riches to rags to riches again myth of survival against all odds as the four women, because of their Jewish heritage, flee Europe with only the minks on their backs and what jewels they could smuggle along with them in their decolletage, only to have to battle afresh for their places in the vicious Hollywood pecking order—gives new meaning to the term “compelling.”

The reader, as if he were witnessing a particularly gore-drenched traffic accident, is incapable of looking away.

Has American fiction ever produced a fictional character equal to the one that Zsa Zsa Gabor created to inhabit her own flesh whenever she was unleashed in front of the populace in seven-minute bits on the Tonight Show and Merv Griffin?

Has anyone ever lived a life publicly in an arc that carried her from Miss Hungary to the Queen of Outer Space?

Magda was the valiant one (the account of her bravery in staying in Europe during the war and rescuing downed pilots as a key member of the resistance impresses). Eva (immortalized finally for her work on the 1960s sitcom Green Acres, the theme song for which has remained lodged in the American consciousness for the past five decades) was the talented one.

But the simple truth is that Zsa Zsa was always the one: the Hungarian Bombshell who battled Marilyn Monroe for George Saunders and snared him, who actually managed to hold her own up against Oscar winner Jose Ferrer as Jane Avril to his Toulouse-Lautrec in the original Moulin Rouge, and who actually created a new category of achievement in America, one that is cherished today—the celebrity who is famous for being famous.

Thus we owe her big time.

And in writing The Glamorous Gabors author Darwin Porter, attempts to repay the debt.

Potential readers should be aware that, along with many anecdotes that will elicit loud laughter (most often from Zsa Zsa’s way with words), there is language that is both graphic and lewd, and sexual acts (dozens and dozens and dozens of them) of every sort and for every reason from passion to gold-digging to rape.

And where there is sex, of course, there are men. Multitudes of them, as Zsa Zsa and Eva (who had sex with Errol Flynn, David Niven, Clark Gable, and Bugsy Siegel, among others) seem to enter into a competition of sorts, with Zsa Zsa the clear winner.

Along the way, she beds so many that a complete list would run nearly as long as the book itself. Suffice this short list and see the volume in question for details.

While older sister Magda tended to marry and stay married, Zsa Zsa romanced actors like Charlie Chaplin (who promised to cast her in a picture ad Mary Magdalene); Francot Tone; the aforementioned George Saunders, who was the love of her life; Saunders’ brother, Tom Conway; Richard Burton (before he married Elizabeth Taylor); Richard Harris; Paul Henreid; Sean Conway; and Elvis, with whom she shared a single night of passion in a hotel suite in Vegas.

In addition to this, she enjoyed liaisons with businessmen like Howard Hughes and Conrad Hilton (and his son Nicky, who would also wed Elizabeth Taylor, with whom Ms. Gabor was involved during her marriage to his father); world leaders including Kemal Ataturk, the “Father of Turkey;” Egyptian King Farouk; Prince Ally Kahn; Joseph Kennedy; his son, John F. Kennedy; and, in the most surreal section of the book, Richard Nixon:

“Zsa Zsa later referred to Nixon’s seduction of her as ‘very professional, very competent, but no one would ever call him a great lover.’

“’He was very stiff around women,’ she recalled. ‘Forgive the pun dahlink.’

“’Even in bed, he insisted on being called Mr. President, although “Dick” might have been more appropriate,’ Zsa Zsa said.”

The problem, of course, is one of believability.

Can any book that is largely based upon the memoirs of Jolie and Eva and Merv Griffin and Zsa Zsa herself be counted as gospel? Unlikely, and it is up to the reader to vet the material as he or she sees fit. But anecdote for anecdote, The Glamorous Gabors is a triumph of pop culture over journalism.

And even in a book laden with the rich, the famous, and the lusty, the greedy and the wildly, aggressively self-obsessive all rushing about showing off their jewelry and finding their key lights, Zsa Zsa finds and hold center stage, and as the only surviving Gabor (married now to her much younger husband, ersatz royal Frederic Prinz von Anhalt, she is in ill health as her hundredth birthday nears) stands as the ultimate survivor of a time now passed.

Which makes all the more bittersweet the account of her life’s arc that she shared with Merv Griffin:

“I blazed through the century making headline after headline. Not bad for a little girl from Budapest who launched her love life by kissing the coalman and getting soot all over my white dress. Men have been ‘blackening’ me ever since. I don’t regret the men who seduced me, only those who didn’t get around to it.

“There’s an axiom in Hollywood . . . actors get older, but actresses get old. My life goes on, although I don’t know for how long. It’s shocking to have been called the most beautiful woman on earth and have to confront my mirror in the morning. Most of my lovers or husbands are long gone, except for my dear Prince. The grim reaper is at my door, but I’ve lived a great life. I was brought into intimate contact with some of the luminaries of my age. I met everyone from Adolf Hitler to Jack Kennedy. I’ve loved a few but been loved by countless others.”

Did I forget to mention Adolf Hitler?

Believe me, that’s a whole other story.