Thomasina: The Cat Who Thought She Was a God 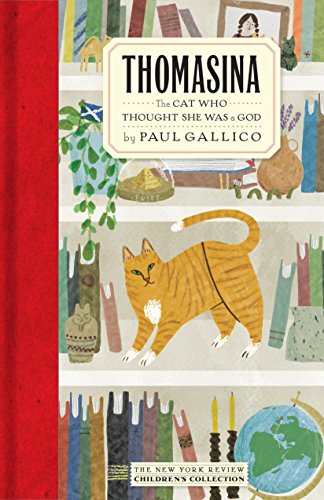 “a touching, satisfying story, . . . [a] profound and insightful tale.”

Little known today, in the mid-20th century, Paul Gallico was an international bestselling, critically admired author. He wrote more than 40 books on a wide range of subjects. Many of his stories were made into successful movies, including The Snow Goose, The Poseidon Adventure, and Mrs. ’Arris Goes to Paris, which starred Angela Lansbury, Omar Sharif, and Diana Rigg. J. K. Rowling said that Gallico’s children’s novel Manxmouse was one of her favorite books growing up.

Although many of Gallico’s books remain in print, he has undeservedly vanished from public consciousness. That sad fact is set to change. The New York Review is bringing classic 20th century children’s books back into print, introducing them to a new generation of readers. They published Gallico’s The Abandoned in 2013 (called Jennie in England, when it was first published in 1950), and their latest reintroduction is Gallico’s Thomasina: The Cat Who Thought She Was a God.

Thomasina is a story told from two viewpoints. First is the omniscient narrator who tells us the story from the human perspective, delving into the complex human emotions and motives that drive the plot.

The second voice belongs to the cat Thomasina. She brags about her past and future life as a god, “My name is Bast-Ra. I am the Cat Goddess of Bubastis. My other titles are ‘Lady of the East’ and ‘Lady of the Sept,’ the star in the eastern Heavens. . . . My father is Ra, the sun, my mother Hathor, the moon. . . . I am a most powerful and important deity.” She also tells us about the events in the story from her perspective.

On a purely superficial level, Thomasina is a romance between the bitter, disappointed widower Mr. MacDhui and shy, fey Lori who prefers to live alone in a remote Scottish glen, nursing injured and ailing forest creatures and earning her living by weaving.

It also is the tale of MacDhui’s motherless little girl Mary Ruadh who nearly dies of grief over the loss of her beloved cat Thomasina. Her grief is compounded by the fact that her veterinary father ordered that Thomasina be put down after he diagnosed her with a meningeal infection. Mary Ruadh mentally and emotionally withdraws from her father, who she claims has died, too.

Thomasina, the feline heroine of the story, summaries the book’s plot from her typically self-centric point of view saying, “I, Thomasina, taken ill, murdered by the very doctor who was supposed to cure me, buried by my friends, dug up by a strange woman, to live a strange life amongst strange people and animals under a different name, until one night I apparently went to sleep in a drawer full of lavender bags and when I woke up I remembered who I was and came home.”

Despite her egotist take on events, Thomasina is on to something. On a deeper level, the story is about resurrection, about new chances in life and about God’s grace.

Thomasina is nearly euthanized, but is rescued and nursed back to health by Lori after the children unwittingly bury her alive. Mary Ruadh, who lost her mother when she was only two, is so traumatized by the loss of her beloved cat, she nearly dies of a broken heart.

Lori also has known grief and loss, and so has retreated to a solitary life in the glen until she meets MacDhui. And MacDhui, grieving for his deceased wife and the career he really wanted as a doctor to humans rather than animals, rejects God.

Each character is in deep emotional and physical need. Their “resurrection” to a new life with new purpose, fulfilment and joy begins when MacDhui’s spiritual journey takes him from an inner life of loss and bitterness to an acceptance of a loving God. With that acceptance comes the love of a woman, a healing in his relationship with his daughter, and even a love for the cat he once despised.

The story is threaded with wry humor, which adds a needed light touch. Toward the end of the story, Thomasina complains that she can no longer irritate MacDhui, saying, “It’s exasperating when you cannot manage to annoy someone no matter WHAT you do.”

She tells us she called up a mighty storm. However, when it arrives, she finds it daunting. She says, “God I have been—God I am. But quite frankly, sometimes it is all just a little too much for one small cat. The demands made upon me. . . . I started this storm . . . but it is terrifying me. . . . If I were not a God, I should go upstairs and hide under Lori’s bed. . . . Whatever I have said, or whatever you may think, Gods do NOT hide under beds.”

Thomasina, ever confident of her Godhood and the central role she plays in the universe, concludes her part of the book saying, “I was always aware, from the very beginning, that I was a most unusual cat, but now I am wondering whether it might not be that I am a very clever one as well; I rather think so. However it happened, all I can say is that this house is now run to my liking.”

Mr. Pettie, the village vicar sees a bigger picture than Thomasina. He recognizes the Christian God’s hand in the events, and concludes, “when you look back over it all, and think about it—from the beginning, hasn’t the design been beautiful.”

Indeed, Paul Gallico has crafted a beautifully designed story, which on the surface reads as a happily-ever-after romance, but on a deeper level is an entertaining as well as profound study of human nature, the nature of God, and of man’s relationship with the Deity.

Recommended for grades three through seven, younger readers will need to be skilled and confident. The vocabulary and sentence structure are sophisticated. For example, when the children are conducting Thomasina’s funeral, complete with a child bagpipe player performing “Bonnie Bonnie Banks of Loch Lomond,” Gallico writes, “The strains of it drifted up the glen and reached the ears of the Red Witch of Glen Ardrath, herself resembling a hamadryad, watching from behind her tree.” In addition, the dialog of the local people in the town of Inveranoch often is written in dialect. MacDhui’s assistant Willie Bannock says of Lori, “Och aye, there’s nae doot she’s got a wey wi’ the wee beasties. The touch o’ her haunt ae is heid is eneuch tae set an auld dog a-din’ tae friskin’ like a pup . . .”

But any child who is willing to persevere will be well rewarded with a touching, satisfying story, and adult readers will be moved by this profound and insightful tale.