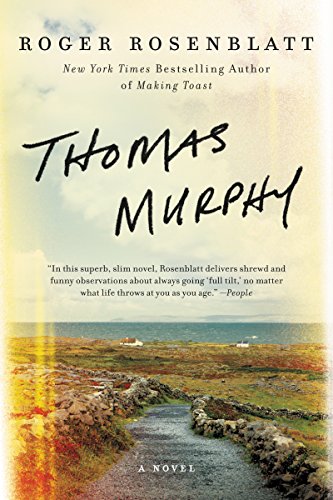 “Everyone is disabled. Love exists for our disabilities. And forgotten things, though they remain forgotten, have a life of their own.”

Roger Rosenblatt is blessed with the ability to write in almost every literary genre, to elide different forms beautifully, and to step between them with grace. That skill is on dazzling display in Thomas Murphy, a memento mori that recalls two of Rosenblatt’s earlier books—Making Toast and Kayak Morning—each of which dealt with loss while appearing to be about something else.

The question of appearances occupies Thomas Murphy, too. Is the lovable Irish rascal demented and in the throes of Alzheimer’s disease, as his daughter Máire, a 40-year-old single mother, fears? Or is he more self–possessed and saner than all the other characters combined? There is a lot to be said for his life philosophy that is both earthy and still full of heart.

The plot ostensibly revolves around the aging poet’s scheming to escape a neurological consultation that Máire has roped him into. He fails, of course, and the book turns into something more meaningful and more poignant.

The story starts as one about aging and the loss of memory. Murphy’s stern, humorless neurologist hilariously comes up against the poet’s wicked, irreverent humor––the kind of humor for which Rosenblatt himself is famous. Told by the doctor that he isn’t safe living alone, Murphy says, “Everyone lives alone.” Then reflecting on his deceased wife he thinks, “I mind being alone without you.”

Murphy’s narration leaps back and forth in time. It shifts among locales, particularly between his boyhood home on an island off the coast of Ireland, and his adopted island of Manhattan where he currently lives in a rent controlled co-op and serenades his neighbors in the courtyard wearing only his skivvies. His past home is a topic of much ambivalence. “I hated the place, but I didn’t want to lose anything about it either.”

In Murphy’s recollection, time and space are fluid. And as in real life, memory and dreams are unreliable. His revisitation of the past is not a straightforward repetition so much as it is a spiral recapitulation of scenes already lived and felt. In this way Murphy recreates for himself and the reader a life from remembered fragments. It does not matter if these fragments make no sense. The remembering is what is important. “What is articulated strengthens itself.”

He tells his grandson—a character evocative of the grandson in Making Toast—that “We make good poets because we know how to deal in absent things, the things taken from our lives.” In keeping with the theme of loss Murphy is asked by a stranger with a knack for making others feel sorry for him, and who claims to be dying of cancer, if the poet would be good enough to break the news to the stranger’s blind wife, Sarah. Sarah is decades younger than Murphy, and although she may be blind she sees well––especially into others’ hearts. Soon her heart becomes entwined with Murphy’s.

Thomas Murphy is a comical yet quiet and introspective book by a poet who sees “the world as a poem––a thing that lives between the lines.” He has followed his own rules and has learned to live with his regrets. The book abounds in antithesis, symmetry, and thoughts that echo earlier thoughts––the way things bang around in one’s head—“This remembering and forgetting, and remembering again, and knowing without remembering exactly.”