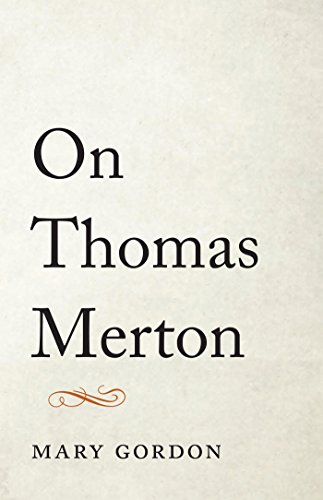 “If Merton is to remain a living voice, it is from such honest and steadfast devotion as Mary Gordon’s On Thomas Merton.”

Novelist, memoirist, and religious writer, Mary Gordon delivers a book of fine insights to one of the key authors of the contemplative religious life, Thomas Merton.

Don’t expect a biography here; for that we have Merton’s own The Seven Story Mountain autobiography and Monica Furlong’s Merton: A Biography (1980) and the more recent Wyatt North’s Thomas Merton: A Life Inspired (2016).

What Gordon presents instead is a penetrating and well researched study of Merton’s motives and methods for writing. Nor is this book an “introduction” to Thomas Merton, the monk-writer. This is a fairly scholarly study with occasional personal detail on Merton’s relationships with other writers and with himself as a monk-author.

Though author Mary Gordon’s parents were friends of Merton, she admits no personal relationship with the man. She does uncover his often tangled relationships with such celebrated others, as Britain’s Evelyn Waugh and Poland’s Czeslaw Milosz. Both offered early advice on Merton’s writing style and method, and he repaid them with sought insights on the act of a contemplative practice.

Waugh offers advice on Merton’s rushing his work and mixing dictions, which Merton acknowledges. Later he will share religious advice with Waugh:

“Like all people with intellectual gifts, you would like to argue yourself into a quandary that doesn’t exist. Don’t you see that in all your anxiety to explain how your contrition is imperfect you ae expressing an instant sorrow that is not so—and that is true contrition.”

Gordon paints Merton the monk-writer by opening to us his many journals and his correspondence. Here in September 1, 1949, we view Merton’s early declaration of his intention:

“If I am to be a saint, I have not only to be a monk, which is what all monks must to do become saints, but I must also put down on paper what I have become. . . . It is not an easy vocation. To be as good a monk as I can, and to remain myself, and to write about it: to put myself down on paper . . . with the most complete simplicity and integrity, masking nothing . . . It is a kind of crucifixion.”

We see Merton’s friendship with Milosz develop later in the 1960s. Merton complains of his double censorship, first by the Catholic Church and then by the secular publishing world. It is a road he blazes nevertheless, while remaining loyal to both audiences as seen in his numerous books of poetry and creative prose (most published by New Directions Publishing) and in his religious examinations done through the Catholic publications.

Mary Gordon culls from Merton’s seven volumes of journals his most penetrating self-insights. She advises us on his conflicted vision as writer, “…at the same time he is disgusted with himself and his writing, he feels a responsibility to continue”:

I have a clear obligation to participate, as long as I can, and to extend my abilities, in every effort to help a spiritual and cultural renewal of our time. This is the task that has been given me, and hitherto I have not been clear about it:…by entering myself deeply into the disciplines and experience, not for myself only but for all my contemporaries who may be interested and inclined to listen. This for the restoration of man’s sanity and balance, that he may return to the ways of freedom and peace, if not in my time, at least some day soon.”

Thomas Merton’s cultural and spiritual commitment is made clear here.

Gordon offers this final praise, “The greatness of Thomas Merton: ardent, heartfelt, headlong. Life lived in all its imperfectability, reaching toward it in exaltation, pulling back in fear, in anguish, but insisting on the primacy of his praise as a man of God.”

As fellow author James Carroll accurately points out, “Gordon is the ideal reader of Merton, matching his intelligence, irony, and authentic feel for the world beyond words. Her book brings his books back to life, and belongs with them from now on.” If Merton is to remain a living voice, it is from such honest and steadfast devotion as Mary Gordon’s On Thomas Merton.