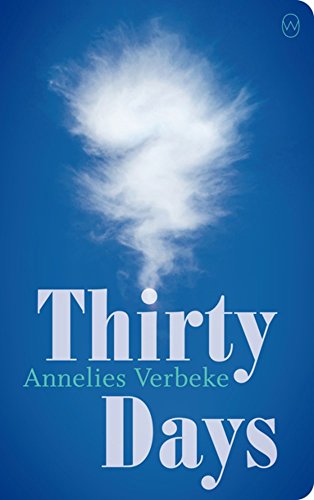 It might be hard to imagine that a novel about a Senegalese immigrant living in the countryside of Flanders would have anything to say about our current world crisis over immigration but that’s where Thirty Days by Dutch writer Annelies Verbeke surprises.

Alphonse, the lead character, is something of a human sponge. He works as a handyman in a small village where he paints, plasters, and hangs wallpaper. But that’s like saying you go to a therapist’s office to sit in a comfortable chair.

His work puts Alphonse behind the closed doors in family residences where a lot of micro-dramas are taking place. People are lonely and desperate to talk so Alphonse, because he is likeable, charismatic and non-threatening, finds himself becoming a listening post and advisor to those several rungs above him on the social scale. Even a client’s dog seeks him out because the owner is so untrustworthy. It’s hard being Alphonse.

Marriages are falling apart, affairs are resulting in hidden pregnancies, writers are suffering bouts of insecurity—and all of them want to talk to Alphonse who has his own problems to deal with. He is a stranger in a strange land and, because he is black, subject to racism. And that racism is heightened because Alphonse’s partner is a white woman named Cat.

Cat and Alphonse have their own troubled relationship. She, as well as Alphonse’s friends, cannot understand why he is living in this tiny village when, in his past life, he was a highly-trained musician who seemed to thrive on the hustle and bustle. Cat wants to move away from the village and doesn’t see life the way Alphonse does. He gets involved in the lives of his customers; Cat thinks they’re all slightly wacky and being unfair to Alphonse for dumping all their problems on him.

At one point, Cat asks Alphonse what he’s thinking about and he lists all the things on his mind, everyone of them a problem belonging to one of his needy clients. She is appalled.

“That was all this month?”
He nods.
“We have to get out here.”
“It’s not the fault of the place.”
“Everyone wants to confide in you about their secret madness. I’ve known that for a while, but it wasn’t ever as bad as this, was it?....I reckon people around here have gone collectively insane.”

There is a fair amount of humor in this novel—the humor and absurdity of day to day life—and even though it’s a translation, it does come through in bursts.

The title is the conceit of the book—there are 30 chapters counting down to a final one. It’s a life in Thirty Days and, while it seems contrived, it does increase the tension as the chapters count down to the final one, and the ending is explosive and unexpected.