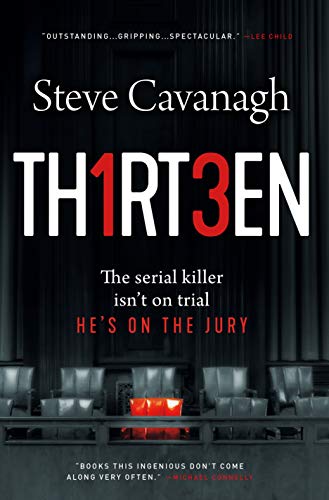 “Author Kavanagh is a master of head-spinning misdirection, firing one OMG plot twist after another.”

Is it bad to admire the remarkable shrewdness of a killer? Yeah, probably.

So let's then admire the remarkable creativity of the author who conjured him up. Steve Cavanagh brings to life in fiction a killer very different from, but as compelling, diabolical, and evil as Hannibal Lecter. Joshua Kane is a devious, single-minded, terrifying killer who will be remembered by readers as one of the classic fictional blood spillers.

Killer Kane has figured out how to get a seat on a particular jury sitting for a particular murder trial of an innocent man accused of killing someone that Kane himself has murdered. Clever, right? But frightening, as well, because what the author has written, despite some stretches of imagination, is not too far-fetched to actually happen.

Kane begins with the mailman who picks up the jury duty notifications from the courthouse:

"The mailman's name was Elton. He was married with two teenage kids. Elton ate from an overpriced artisan deli once a week when his wife thought he was out running, he read paperback novels that he picked up for a buck apiece from a little store in Tribeca, and wore furry slippers when he took out the trash on Thursdays. What would it feel like to watch him die?"

But, no, not yet. Kane needs to get a look at some of the jury duty notices in the mail bag Elton has just picked up. He watches as Elton hurls the last mail bag into the van:

"He closed the right side of the van doors, then took hold of the left-hand door and slammed it shut like a man who didn't own it. Timing was key. Kane stretched out his hand fast . . . The path of the door took Kane's hand and the momentum slammed the door shut on Kane's arm. . . .

"Half a minute later he had sixty, maybe seventy envelopes spread out in front of him. He took pictures of five envelopes at a time, using a digital camera that he then tucked back into his clothing. He could blow up the images later to focus on the names and addresses written on each one."

That's just the first step. Many more hurdles stand in the way of actually ending up on a jury for a coming murder trial. Is Kane up to the task? He thinks he is and quick-wittedly overcomes each obstacle he encounters. In his mind, he's the smartest guy in a room.

But he hasn't yet met attorney Eddie Flynn, a former con man who turned his life around and is now a hot shot legal eagle still secretly living in his office. Eddie is invited by the trial attorney to sit second chair for the defense.

Kane is a truly horrifying bad guy. He steals an identity by making someone disappear, literally making him vanish with absolutely no trace remaining. None. This is detailed in chapter four, but don't try it at home.

And chapter ten is not for the faint of heart, either:

"If he hammered on the dead guard's wrist with the cleaver, it would likely take between five and ten blows to sever the hand. Most of the impact would be absorbed by the muscles and sinew within the wrist. This method would likely take thirty seconds. Instead, Kane planned to take five seconds to run the filleting knife through the muscles and flesh of the wrist, exposing the bone. A single blow from the three-pound cleaver would then complete the job. Estimated time would be fifteen to seventeen seconds."

There's a lot of that in the book. Kane is a meticulous planner, a fast talker and he excels at thinking on his feet when the unexpected happens. He's steadfastly committed but meets his match in good guy lawyer Eddie Flynn whose instincts are sharp and on point.

Author Kavanagh is a master of head-spinning misdirection, firing one OMG plot twist after another. His vivid, gut-wrenching scenes of a truly evil bad guy will have readers checking the locks on all their doors and windows.