The Third Revolution: Xi Jinping and the New Chinese State 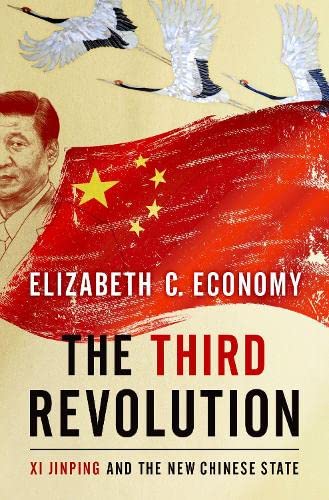 In 1947 in the journal Foreign Affairs, George F. Kennan, then Director of the State Department’s Policy Planning Staff, wrote “The Sources of Soviet Conduct,” which examined the capabilities and intentions of the Soviet leadership and proposed a U.S. strategy of “containment” to counter the Soviet threat.

The rise of China as the next peer competitor of the United States has, unfortunately, not produced an analysis that rivals Kennan’s intellectual achievement.

Instead, most U.S. China experts, including Elizabeth Economy, the author of The Third Revolution, provide a plethora of facts and evidence demonstrating the emergent China threat, but shrink from advocating a Kennan-like policy of containing China.

Economy, one of the America’s most respected China experts, shows in her new book that Chinese President Xi Jinping seeks to have China replace the United States as the leader of the global order; it is part of what Xi calls the “China Dream.”

President Xi, the author notes, has accumulated more personal power within the Chinese Communist Party and state than any leader since Mao Zedong. He has reversed to some extent the market reforms established by Deng Xiaoping, presided over the unprecedented growth of Chinese military and naval power, promoted China as an economic and cultural model for the rest of the world, and clamped-down on political dissent at home.

China under Xi’s leadership has acted more aggressively in the South China and East China Seas, effectively claiming a sort of Monroe Doctrine for the region adjacent to its east coast. This is the very region that includes a series of islands and island chains whose independence is essential to an effective U.S. strategy of containment.

Economy, in short, makes the geopolitical case for U.S. containment, but proposes a far more nuanced approach that combines engagement and competition.

For example, Economy advocates a “more multilateral, principles-based foreign policy.” She calls for “managing the relationship with Beijing.” She proposes an “’engage but hedge’ approach, which . . . has the virtue of orienting the relationship on a positive trajectory while nonetheless protecting U.S. interests in case China’s intentions are malign.”

The Third Revolution amasses considerable evidence of China’s “malign” intentions toward the U.S.-led liberal world order. Why, then, does the author recoil from the logical policy that flows from her evidence?

Perhaps for the same reason that many Soviet experts recoiled from the logic of Kennan’s proposed policy of containment in 1947 and thereafter: the thought of great power confrontation, including the possibility of nuclear confrontation, was just too frightening to contemplate. It was so much more hopeful, satisfying and sophisticated to believe that “peaceful coexistence” or “détente” could substitute for the harsh reality of the Cold War.

Indeed, Kennan himself gradually distanced himself from containment, claiming that he had been misunderstood when he advocated a policy of “firm” and “vigilant” containment of Soviet power.

A China that seeks, in the author’s words, to “reshape the global order” necessarily poses a geopolitical threat to the United States, the current “shaper” of that global order.

A China that through the expansion of its military, economic, and cultural power seeks to become the predominant power on the Eurasian landmass necessarily threatens U.S. predominance. The lessons of history and classical geopolitics teach that Eurasia remains the chief prize in great power competition.

The most recent challenge to the U.S.-liberal world order was ended not by détente, but by the “firm” and “vigilant” polices of the Reagan administration in the 1980s. Those policies did not, as some analysts feared, lead to great power war. Instead, the policy of “peace through strength” exploited the vulnerabilities of the Soviet system and led to its peaceful collapse.