Think Like a Feminist: The Philosophy Behind the Revolution 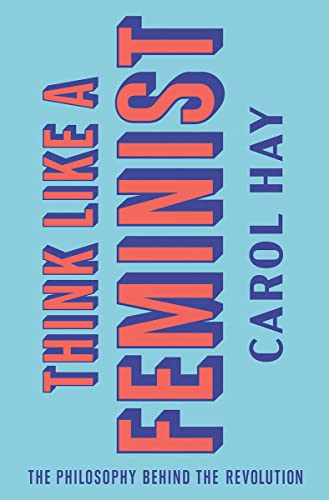 Carol Hay notes in her preface the current buzz of conversation around feminism, crediting the #MeToo movement with “laying bare the elephant in the room, skeletons burst from closets, dirty laundry flaps in the breeze.” Though, as she rightly notes the struggle for gender equality has been rumbling along for centuries.

She aims in the book to present “a long-view on women’s reckoning with sexual harassment and sexual assault, by putting these concerns into a larger historical and socio-political context.” The earlier part presents the contextual analysis of the feminist movement and the key concepts and concerns (oppression, nature/nurture, sex /gender, varieties of sexual violence) in the most successful and best argued chapters. The switch in later pages to offering advice to women, and men on relationship management seems underwhelming.

In the early chapter The F-Word, Hay reflects on the existence of many varieties of feminism, though she recognizes only three waves as opposed to the more usual four or even five. She highlights the disagreements between feminisms, and the leakiness of some of the emblematic terminology and slogans, “identity politics” and “the personal is political” among others.

In the early part of the book Hay also addresses two persistent feminist caricatures that she sees as having had undue influence on public opinion, namely “the Angry Feminist” who “puts off men and women alike”; and “the Girl Power Feminist” who though more appealing is focussed on the success of individual women in a man’s world rather than on structural change.

Within the frame of Angry Feminist she presents some useful commentary on Simone de Beauvoir, bell hooks, Andrea Dworkin, and last but not least Rosa Parks who memorably refused to give up her seat on the bus. Angry Women are to be embraced, even though they are less likeable than “sexy, feisty . . . fundamentally unthreatening” Girl Power Feminists. According to Hay, the Spice Girls “practically invented the genre” with their promotion of “an uncritical fantasy of feel-good sisterhood.”

Girl Power Feminists are also credited with misunderstanding and turning on its head the feminist slogan “The Personal Is Political” taking it to mean that personal choices have political righteousness; rather than that external political structures condition every aspect of our personal lives. The user-friendliness of Girl Power Feminists has enabled them to slip smoothly into the popular mainstream, unlike the Angry Feminists. Of course the same person can be both angry and girly at different moments, as Beyoncé among others has shown. What emerges from this and other chapters is the impression that feminists of different stripes spend far too much energy and time criticizing each other, thus reinforcing their differences.

Hay reviews the key feminist concept of “oppression” from both male and female angles visualizing the multiple constraints on women’s freedom as the many invisible wires of a birdcage (an image she borrows from philosopher Marilyn Frye); whereas (invisible) privilege is conceived of as an Invisible Knapsack (feminist Peggy Mackintosh) worn by the privileged, white individual. Hay provides powerful illustrations of the practical implications of intersectionality for individuals who find themselves at the confluence of several social fault-lines (sex, gender, race, ethnicity, class, age, ability etc.).

Hay’s chapters on the social construction of sex and gender analyze the current status of the Nature/Nurture debate, reflecting inter alia on the failure of some, even famous, feminists, to embrace diversity. Betty Friedan is name-checked for her views on the “lavender menace” of lesbianism, and for her focus on women of privilege (presumed white), though she could have been more credit for her powerful analysis of the institutions and events that collectively conspire for women’s oppression. And “feminist icon” Chimamande Ngozie Adichie’s refusal to equate transwomen with women is also critically noted.

In Chapter Five Hay provides a solid analysis of sexual violence as a manifestation of structural inequalities that are internalized by women and by men, taking Second Wave feminists such as Susan Brownmiller  Against Our Will: Men, Women and Rape)  as her starting point and inspiration. She agrees with Brownmiller, Ann Cahill, and others that women’s ever-present fear of being raped results in them accepting the constraints of marriage and the built-in protection that brings; though “women’s bodies can be used to serve as vehicles for men to express their hatred of and dominance over each other,” hence women are raped as spoils of war. Rape can be an expression of competition between men, where the woman is little more than collateral damage.

In the closing chapter Where the Rubber Meets the Road, Hay provides “some practical steps for escaping or at least shaking the crap out of the birdcage.” Escaping, or shaking out the crap, primarily involves knowing sexist oppression when you see it. Presumably in this latter part Hay is attempting to connect the “political” to the “personal,” but the arguments seem strangely dated and conservative. These pages read as if there had been no progress at all on gender equality despite the decades of feminism that she has chronicled.

Are women of the Fourth or Fifth Wave still so preoccupied with “catcalling” and “manspreading” on public transport, and so unable to cope? Are they not more, or at least equally, concerned about the gender pay gap, and the potential withdrawal of abortion rights? How many male readers will be grateful for Hay’s tips on getting better at flirting? And do couples really need a system of “safe words” so they can communicate consent, or its opposite in clear terms? Even given her stated focus on analysis of sexual violence and how to deal with it, a more serious analysis of economic imbalances, of evolved thinking on chromosomes and hormones (relegated to a footnote on page 127), of the influence of social media and so on and so forth . . . would have resulted in Hay being able to offer more realistic and relevant closing advice. Thinking like a feminist proves to be a very cautious experience indeed.