Things You May Find Hidden in My Ear: Poems from Gaza 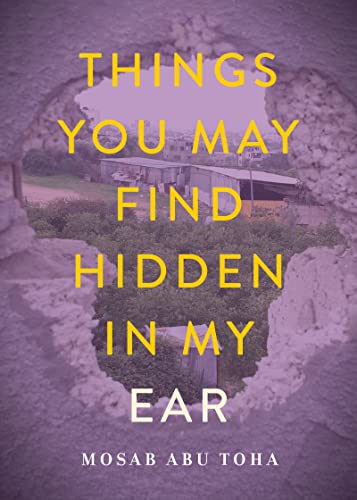 The other day a new video emerged from Ukraine of shelling in an apartment project—reporters and grandmothers dash for cover as large, pressure-sucking booms roar through the cement canyon of the complex: but they’re not there. They’re miles away. The cement reflects the sound from one building to the next, and even those far from the cover hide, sure that they, too, are in danger. This is easy to understand: It is hard not to hear echoes in a place racked by bombs.

Mosab Abu Toha’s world is echoed by bombs, and the new elegant offering—written with an American voice to speak about a world few Americans can understand—evokes so much of those who came before him, in particular Czesław Miłosz and his quietly loud poems of the Second World War. As all soldiers know: All wars are the same, changed only by technology, populated by the worst and best that humans might ever offer. It was the same for Miłosz as for Toha as for the villagers of yesteryear hearing hoofbeats rise on the Mongolian steppes. History rhymes. Poetry echoes.

This may be one of the finest poetry books of this year: self-referential and droll, horrible and pretty, a glistening mosaic of shards and shredded steel. It is a complex book about a complex world, born from a contentious war that has lasted three generations, told by a youthful voice that has known nothing but. Still, there is America here: “when I was asked to fill out a form for my U.S. J-1 Application,” he notes, “my country, Palestine, was not on the list. But lucky for me, my gender was.”

In a poem far later in the book, he starts with a punch: “The house has been bombed. Everyone dead: The kids, the parents, the toys, the actors on TV . . . the I, the he and she. No pronouns left.” Escaped to a new world—where he is oft employed in the quietest possible world, as a librarian—Toha regains what has been lost: silence and, yes, identity.

There are some missteps here, most notably an unnecessary interview with the author that doorstops the book and calls to mind the lesson of inadequate teachers who ask their class “well, what was the poet trying to say?” If the poet is good, we know what she was trying to say. Here, the poet is good. We don’t need the clarification. Also unnecessary is a small section of photographs, perhaps too heavy handed (a dangling rope captioned “Everything gets tied in Gaza’s noose” opens the section) and fully unwarranted in a book so rich with imagery to begin with.

You can forgive those missteps, though, due to the author’s palpable excitement: Toha has a lot to say and wants every venue to say it.

It is a book rife with death yet painted in every corner with an almost unbearable amount of life, the way one might enter an abandoned house and find the books on the shelves, the bedsheet still folded over, the last cigarette, lipstick and all, left in the ashtray. Absence, here, is a form of presence. Unseen villains still threaten. Unseen friends still linger. And faraway bombs still shake the unfelt ground, still echo, are still things you may find hidden in your ear.