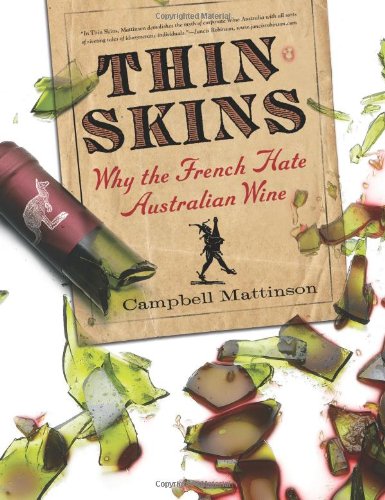 If you have years of articles and website postings about various Australian wine topics, how do you weave all those writings into one coherent book with a single narrative flow? Australian wine writer Campbell Mattison shows that it really cannot be done.

Thin Skins bounces from topic to topic for most of the book, only briefly alighting on the subject of why the French hate Australian wine. Yet the book is saved by Mr. Mattison’s infectious enthusiasm for Australian wine and wonderful writing, and the reader will come away wanting to seek out some of the wines—despite the fact that much of the book is a haphazard collection of unrelated anecdotes.

This is not an Introduction to Australian Wine book, nor a survey of the Australian wine industry. Rather, it is a collection of essays by an Australian wine enthusiast who managed to land a job where he got paid to travel all around Australia visiting wineries and winemakers and tasting their wines.

By his own account, Mr. Mattison came relatively late to wine, but when he did, he fell for it in a big way, switching from sports writing to wine writing. In the only 10 or so years that he has been a wine writer, he has quickly gotten up to speed—at least on Australian wines. He now has his topic down quite well and writes about it in a decidedly unsnobby style.

As a relative wine newbie, Mr. Mattison has only a secondhand sense of what the Australian wine industry was like before it was “discovered” by Robert Parker in 1998. But he covers that revolution well, giving colorful narratives of winemakers hearing that Robert Parker (who?) had given their wine a score of 99. Most Americans, even most American wine drinkers, did not notice, mainly because the highly rated wines had incredibly tiny production runs and their prices quickly shot into the stratosphere. But over in Australia it caused a radical change in the industry.

A couple of years before, the Winemakers’ Federation of Australia had launched “Strategy 2025,” which set the audacious goal of creating at $4.5 billion wine industry by 2025. That goal was hit in four years. The big guys got bigger—Australia is dominated by four or five large producers to an extent unheard of in any other major wine country—and many more little guys came on the scene.

Mr. Mattison began writing the materials that wound up in his book during the boom times. He finished the book after the bubble had burst, leaving acres of vineyards with grapes on the vine and barrels of wine that simply had to be discarded or sold for pennies on the dollar.

If Mr. Mattison has a theme that can be picked out from his sometimes rambling discourses, it is that Australian wine is often caricatured as big, clumsy fruit bombs that nevertheless capture the attention of the critics and grab market share from the French (who thereupon hate Australian wine), while the reality is that there are many Australian wines with great character. His prescription for what ails the Australian wine industry is that it needs to emphasize its “authenticity.”

Most American wine drinkers, when they drink Australian wine, drink [yellow tail] or Jacobs Creek and the like. They may not prefer “authentic” Australian wine, and in any event would not be willing to pay the $25–$40 that “reasonably-priced” authentic wines would cost. An authentic Australian wine industry would probably be more prestigious, but it would be much smaller than it is even today.

Over two-fifths of the book is a single chapter on Australian Wine Stories, Mr. Mattison’s profile of 26 wineries that stand out for him, in no apparent or particular order. This is one of those chapters where the reader can browse among the wineries, concentrating on those that he or she is already familiar with (as this reviewer did), learning many new factoids about that winery. One can also read through it to get ideas about other wineries whose products one should keep a lookout for, or which wineries one might want to visit if one gets to Australia (although Mr. Mattison gives only the vaguest ideas where the wineries are actually located).

The epilogue notes that the Terry Theises and Alice Feirings of the world are scathing in their criticism of Australian wine. But Mr. Mattison no longer rises in indignation to their complaints. He recognizes that they are concerned about the disappearance of wines conveying of sense of where they’re from.

He writes: “The question isn’t whether or not Australia and the New World make charming wines of diverse quality; it’s whether or not anyone will be able to tell them apart from the wines from anywhere else. I took the criticisms of Australian wine personally, but the main accusation against Australian wine really is this: you guys started it. You burst onto the scene and changed everything, and now my favorite wines are trying to emulate you. I hold you responsible!”

Australian wines can be wonderful: from light, crisp, dry Rieslings to big, rich Shirazes, and several styles in between. If you are not already familiar with Australian wine regions and the types and styles of wines grown in them, it may be better to first read an introductory book.

Then you can enjoy Mr. Mattison’s ground-level perspective, learning more details in the idiosyncratic yet interesting fashion in which he presents them.