Before They Were Artists: Famous Illustrators as Kids 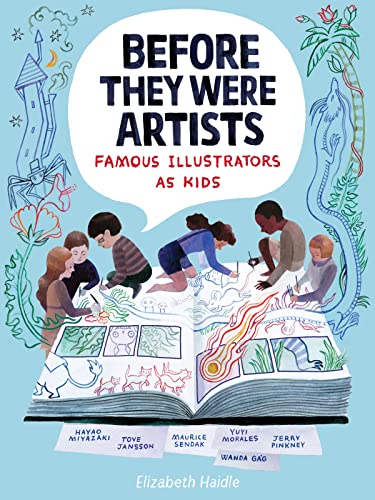 The graphic novel, Before They Were Artists: Famous Illustrators as Kids, covers the careers of six illustrators, three men and three women, of varying levels of fame, three deceased and three alive. The book includes Wanda Gág, Maurice Sendak, Tove Jansson, Jerry Pinkney, Yuyi Morales, and Hayao Miyazaki.  Some are from long ago; others are current and still producing. One is the pioneer of the double-page spread. Another is best known for his monsters, another for her moomintroll, another for talking skeletons, another for bringing diverse characters to mostly European people in the arts. Another is famous for flying dragons and aircraft.

The illustrators hail from Minnesota, New York, Pennsylvania, Mexico, Finland, and Japan. The book could’ve been just U.S. artists with a sequel for world artists, or vice versa. The timeline at the bottom of each section is helpful to envision each illustrator’s rise to fame.

The pale blue cover lets the artists, shown as children, stand out as they fill a double-page spread with their favorite things.

The book opens with the questions, “What is an illustrator? Did young aartists realize they were destined for art? Did their pets sit still for portraits, waiting to be sketched?”

Then the page turn reveals the woman famous for the book, Millions of Cats. Wanda Gág was born more than a century ago. Eight pages of comic-strip style art tell her life story and how she drew her own cats and achieved fame. Milions of Cats is the oldest picture book still in print (1928).

A double-page spread introduces Maurice Sendak and tells how he used his own scary relatives as models for the monsters in his most famous book, Where the Wild Things Are (1963). He also gets eight pages to tell his story. Tove Jansson is famous for the Moomintroll books (beginning in 1945). Jerry Pinkney illustrated many classic tales, including Aesop’s Fables and the Tales of Uncle Remus. He won a Caldecot Honor in 1994 and 2002. He gets six pages of story, maybe because he isn’t done with his life yet.

Yuyi Morales came to the U.S. from Mexico with her American husband and baby, taught herself English, and started drawing. She won the Caldecott Honor in 2014 for Viva Frida. She brings Mexican stories to life, thrilling readers on both sides of the border. She also gets six pages of story.

Hayao Miyazaki is prolific in his output and gets eight pages of story. He says: “I feel like a lid on my brain . . . has been opened, and that an electrical current connects me to some other faraway place.”

This graphic novel is filled with color, muted tones of browns, grays, blues, and greens, with red, peach, and yellow as accent colors. Each section stands separate from the others.

The book is jam-packed with facts about the different illustrators’ childhoods and how they were shaped into artists and, more specifically, makers of children’s books.

The back matter consists of Source Notes and a two-page bibliography.

Before They were Artists will be a well-used book for grade school famous people reports. Every reader will learn something new, and there is much to learn. Whether a reader recognizes the artist or learns about him or her for the first time, they will no doubt become inspired and might start thinking about a career for themselves, drawing what they know.