They Never Come Back: A Story of Undocumented Workers from Mexico 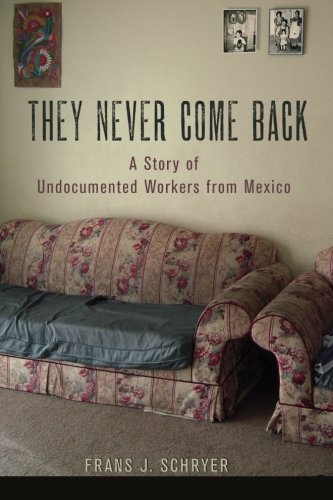 “It is not that migrants never come back, it is that they can never come home enough to keep families, cultures, and hearts whole. An immigration policy which grants work permits as necessary and stops conflating immigration with threats to national security seems long overdue for both humanitarian and economic reasons.”

“Imagine if you found out that you are a Mexican when you thought you were an American. Imagine if you had no other choice but to move to a neighboring country as the only way to make a decent living, and then you are cut off from your family even though the place where they live is not that far away.”

In They Never Come Back: A Story of Undocumented Workers from Mexico anthropologist Dr. Frans Schryer shares the migration experiences of indigenous people from the Alto Balsas basin in the state of Guerrero. His goal is to provide readers with a better understanding of the everyday struggles and contributions to the American economy of these so-called illegal aliens and thereby underscore the urgent need for reform of a dysfunctional and hypocritical U.S. immigration policy.

Dr. Schryer is in a prime position to paint an empathetic portrait of these men and women who have slipped across our southern border to labor in the shadows and keep the wheels of American commerce turning in jobs that we do not want to do, for minimal pay and few benefits. He has conducted ethnographic field work in rural Mexico for over four decades and speaks Nahuatl, the language of the ancient Aztecs and the mother tongue of his informants.

This longitudinal perspective allows the author to illustrate how the migrant experience has changed significantly over the past two decades for Mexicans on both sides of the border.

Up till the mid-1980s when handicraft production in the Alto Balsas provided a viable alternative to peasant agriculture, most migrants traveled a circuit within Mexico to sell their wares. A much smaller number opted to work for wages in the United States, sending back remittances and returning home on a regular basis through a relatively porous border. In both categories, the vast majority of migrants were single men.

After the signature of the North American Free Trade Agreement (NAFTA) in 1994, which opened up the Mexican economy but drastically decreased employment options, the migrant exodus accelerated until the events of 9/11 and the subsequent militarization of the border slowed the stream.

Nonetheless, “Mexicans, including the vast majority of young people in the Alto Balsas, continue to look for work in the United States despite ever more sophisticated border control measures. The gap in wages and living standards between the two neighboring countries has not narrowed enough.”

Nowadays, more people migrate as domestic units, albeit often incomplete as young children may be left behind with relatives, while it is not uncommon for single women to make the increasingly perilous journey north to “the other side” order to do their bit to support the family at home; however, few migrants go back and forth anymore.

“Millions of undocumented Mexicans living in the United States feel boxed in. They might want to attend weddings in their hometowns or spend time with dying grandparents; but they need to keep their jobs and face increasing risks if they leave and then reenter.”

Though most migrants still make an effort to maintain ties to home, even building a house in their village or paying relatives to assume public service obligations traditional in closed corporate indigenous communities, family separations may be extended or essentially permanent. And with time and distance inevitably community affiliations erode.

In particular, American-born and Mexican-born offspring of migrants have very different life chances, aspirations, and world views as nowadays young migrants raise their children in the United States creating an ever-widening social and cultural divide. As one migrant quoted by Dr. Schryer put it:

“I do not have much contact with my paisanos because I’ve been living here my whole life. Most of my friends are Americans, including Americans of Mexican descent. I am very different from my cousin . . . who came here four years ago. We are around the same age, but there is little we can talk about.”

Yet even these highly acculturated migrants live in constant fear of detection, as it becomes increasingly difficult to obtain fake documents that will pass even in the underground economy, and xenophobia flourishes especially in border regions.

What makes Dr. Schryer’s book stand out among the burgeoning literature on Mexican migrants to the United States is his emphasis on indigenous people in transnational communities in today’s increasingly interconnected world. Now that anthropologists’ informants, no matter where they live, are likely to own cell phones, have Facebook pages, sell Avon products, or Skype their relatives “. . . it does not make much sense to study migration only by looking at people in their place of origin, or conversely, their place of destination.”

“By simultaneously doing field work in the United States and in Mexico, I discovered that I could sometimes find out more about a town in Mexico from an interview with someone living in an apartment in a large urban center in the United States; likewise I learned as much about the immigration experience from interviewing former migrants now living in Mexico as I did from talking to migrants in their homes and places of work north of the border.”

Dr. Schryer’s book also stands out as a conscious attempt at a piece of public anthropology, which eschews the exhaustive citations, complex theory and associated technical jargon academics present to peers for straightforward communication of research results to a broader audience with the intention of opening up public debate on immigration.

In the main, he achieves this via an engaging narrative which relies heavily on direct quotes from informants; however, there are so many extracts from so many interviewees that at times it is hard to keep the cast of characters straight. Also, it would have been nice to get to know at least a few of the informants in more depth as individuals rather than as fragmented voices weaving in and out of thematic chapters.

The only other detraction is that the book title They Never Come Back is rather confusing at first as most migrants from the Alto Balsas do, in fact, return for visits. Rather, the title is a commonly heard regional expression in Nahuatl which conveys a feeling of frustration, loss, and disappointment experienced by both the older generation left behind and the younger generation who must sever their roots to live in America.

“I chose this expression as the book title because it is consistent with the theme of ambiguity and contradiction inherent in the phenomenon of undocumented workers.”

It is not that migrants never come back, it is that they can never come home enough to keep families, cultures, and hearts whole. An immigration policy which grants work permits as necessary and stops conflating immigration with threats to national security seems long overdue for both humanitarian and economic reasons.