They Called Me God: The Best Umpire Who Ever Lived 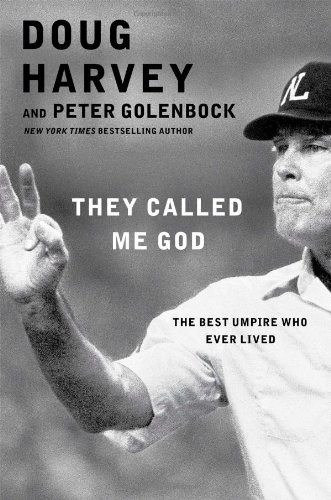 "Where does all this leave us? With sports figures morphing from entertainers, to reality TV whores, and then into candidates for Dr. Phil’s couch, that’s where.”

Once upon a time, sports books were revelatory. They told inside stories of competitive greatness, with a little bit of humor, sociology, and male bonding thrown in.

Athletes once were sportsmen and sportswomen. Today they’ve turned into entertainment figures, Kardashians in jock straps. And who really needs to read a book about that?

These’s neither greatness nor goodness in most of the sports books published these days. The two latest embarrassments: They Call Me God: The Greatest Umpire of All Time by Doug Harvey with Peter Golenbeck, who surely should have known better, and You Heard Me by ESPN broadcaster Colin Cowherd, who clearly did not.

Harvey was the greatest baseball umpire of all time; if you don’t believe it, just ask him, and he’ll tell you. His book details his rapid ascent from poverty and minor league ball to the pinnacle of umpiring success, including deification in the baseball hall of fame.

Fans of 1960s and 1970s baseball will love the inside stories of basebrawling with the likes of Juan Marichal, Willie Mays, Leo Durocher, and Tommy Lasorda.

The problem is: Just how many baseball fans of this era are still alive and buying books? Probably not many. When I was a kid, a staple of baseball games was the old guy sitting alone, nursing a beer, not bothering anybody, keeping score in a weathered scorebook. I think those guys are the target audience for this book. My fear is they have all gone on to greener playing fields.

One thing that lives on, at least in Harvey’s memory and now in hardcover, is a startlingly clear recollection of everyone who so much as looked at him the wrong way. Why did Peter Golenbeck, a deeply accomplished sports book author, find it edifying for the reader to include the complete catalogue of every one of Harvey’s resentments?

Next up, Colin Cowherd, host of ESPN Radio’s national morning show. Many listen to Colin daily and like the guy. He tends to suffocate with his admiration for his own intelligence and his compulsion to point out that he’s the smartest guy in any room. But he still makes for great radio, because in between all that he brings perspectives on sports that are engaging and thought provoking.

The problem is that his book falls between two stools, or two audiences, more accurately. On the one hand, Colin wants to sell a lot of books to the regular Joes who make up the overwhelming majority of his radio audience. There are two problems with that strategy. First, they can’t read. Second, they’ve already heard the opinions expressed in the book on the radio.

The book is cleverly disguised as wisdom, as if Cowherd were begging Career Guy to accept him as an intellectual equal. At the end of the day, though, the book is less about fresh insight for the reader and an unending undercurrent of praise for the author’s own verbal acuity. A guy as smart as Colin could have done a lot better.

So why are sports books, of which these two are emblematic, so maudlin and self-serving today? A quick trip down memory lane is in order. Forty years ago, Jim Bouton, Roger Kahn, and Roy Blount, Jr. launched an entirely new approach to sports books with Ball Four, The Boys of Summer, and Thirty Tons A Day, which took us inside the locker rooms and the private lives of the players in ways that the prior approach to sports writing—pure hagiography—never did. So sports books were raunchy and revelatory for the next four decades.

Then came Andre Agassi’s Open, in which the tennis star singlehandedly transformed the genre of sports books by telling us far more about his wounded psyche than any reader would have dared to ask. The book is a masterpiece, and like most masterpieces it is widely—and poorly—imitated. In fact, it ushered in the current era of sports books, which are all about the soggy, tortured souls of competitors.

“Pity me,” these books—by the likes of Doctor Jay, Doc Gooden, Jimmy Connors and other greats—seem to say. “I’m the greatest in the world at what I do. I make a fortune. But underneath, I’m vulnerable and miserable, just like you.”

The best thing Tiger Woods ever did post-divorce didn’t happen on a golf course. It came down to his refraining from writing a tatty tell-all about his 15 girlfriends. His restraint was admirable, certainly compared with Hank Haney, his former swing coach, who wrote a book gleefully exposing all of his boss’s character flaws. Hey, Hank: Take a look in the mirror. Disloyalty is a character flaw, too.

Where does all this leave us? With sports figures morphing from entertainers, to reality TV whores, and then into candidates for Dr. Phil’s couch, that’s where. That’s why the whole genre of sports book writing appears to have played out. As Carly Simon sang back when Bouton, Kahn, and Blount were writing the greatest sports books of all time, “Sometimes I wish . . . often I wish . . . that I never, ever, ever, ever knew . . . some of those secrets of yours.”