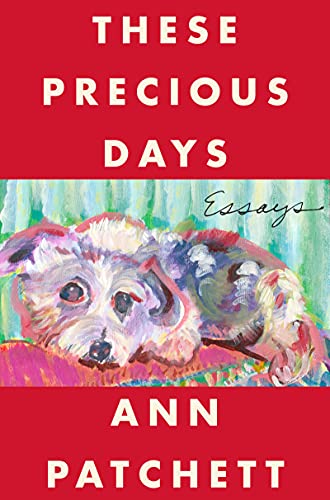 “For sheer reading and reflecting pleasure, These Precious Days is a treasure.”

Although not quite old enough to definitively summarize her life lived, Ann Patchett has written a memoir of essays called These Precious Days. At first glance, it looks like she has given up writing and, in her retirement, has taken up art, as a painting of a small dog looks up from the cover. The image, combined with the evocative words of a popular song creating the title of her book, promises an edition of predictable but perhaps mawkish reflections on a privileged life.

With its first-impression disappointment, this image of a dog’s mournful but sweet face brings to mind that consistent item of life’s injustices—there are those writers who have, by a combination of circumstance, talent, early encouragement, hard work, and luck—come into the rewards of being respected, of having their first pages read and lapped up, of having doors opened, of not having to worry about how important their cover image is. These golden writers, and Patchett is one of them, can get away with whatever they want—and still have a book that sells.

It becomes ironic, then, that Patchett devotes an entire chapter to the choice of book covers. Throughout her career and 13 published tomes, she didn’t get what she wanted most of the time. And in another essay, how a definitive summary of her COVID lockdown year, figures poignantly into the rescue dog’s face on the cover.

In this collection of essays, Patchett looks back on the discovery of her own privilege as a gifted and promising writer who goes onto be crowned with laurels of success, whose accomplishments bring her in close proximity with the rich and famous (from Tom Hanks to John Updike to Dionne Warwick) and invite her to sit among them as an equal.

She begins with “Three Fathers,” which sets the stage of her evolution as a writer. Here she pays homage to the three men who loved her mother and thus inserted themselves into her life as parents. In a moment of planned serendipity, a photo with all four of them is snapped at a wedding with Patchett in the middle. She occupies the space of the beloved—you can see she’s their treasure.

She skates over college memories with “The First Thanksgiving” and “The Paris Tattoo,” early memorable youthful adventures, followed by “My Year of No Shopping” and “The Worthless Servant.” Here she speaks of Charlie Stoblel, a do-gooder whose life had been dedicated to the care of the Nashville homeless. In a description of a tattered motel “of the lowest possible order” she finds a masterpiece:

“Every human catastrophe the carpet in the hallway had endured over the years had been solved with a splash of bleach, which rendered it a long, abstract painting.” And in the telling, an almost unbelievable story rolls out: Stoblel’s mother was 74 when kidnapped from a Sears parking lot in Nashville and murdered by an escaped convict from Michigan, “the first victim in a spree that ultimately took six lives.” And with the loosening of these words, life is definitely stranger than fiction.

Detail is one hallmark of good writing, and in a life lived, there has to be a purge. In one essay, “How to Practice” Patchett makes a meal out of relocating her inessential worldly goods into others’ hands, and in doing so inspires the rest of us to get at it before someone else has to. Here, it is her ruthless mood that is enviable, her complete peace with separation, as she looks upon her early writing sometimes disdainfully and once-meaningful objects with determination to clear space for herself.

To be fair, Patchett has a legacy of published books in the literature of her time, and so perhaps it is easier for her to know what she can let go. She’s already written down the important stuff and pored over every word of it. Not only is it not lost forever to time, there are copies.

She puts Snoopy under the microscope, and Eudora Welty along with her skill as a knitter, and manages to wring a writer’s meaning out of it all. “Flight Plan,” an essay on her blind confidence in her husband’s abilities as a pilot, summarizes not only his obsession to fly, but Patchett’s unshakable faith in his considerable abilities and somehow paints an impression of the fabric of their relationship. “I fly with him all the time, and when we’re together in the plane I’ve never been concerned, not about black clouds or lightning, not about turbulence that could knock the fillings from your teeth.” And there you are, sitting next to her in the Cessna, or the 1947 de Havilland Beaver, knowing that feeling.

Patchett is irresistible because she is a generous observer. She’s game, she gives the benefit of the doubt and she can put it into words. In “Tavia,” she describes her friend: “She was the sweetheart queen, sorority president. Boys trailed her like a tail on a kite, discomfited by desire,” and “This is where the reader might be tempted to think that she was ‘the pretty one’ and I was ‘the smart one,’ but that would be a fairy tale. Tavis is scorching smart.”

“You can’t be a real writer if you don’t have children,” is the topic of a chapter, which wanders off into personal angst, desire, fantasy and decisions Patchett had to make and justify so that she, as a woman, could live in peace with herself as a writer sans offspring.

“These Precious Days,” the title essay that takes up almost 70 pages, is a COVID-lockdown story that mixes the celebrity of Tom Hanks with an unexpected, unusual relationship with Hanks’ assistant, Sooki, a mysterious woman who is an artist in her own right. Without directly referring to it, this chapter explains the domesticity of the dog portrait on the cover of the book and digs deeply into this “bundled up together” COVID moment of all our lives. It’s imbued with Patchett’s generosity of spirit and gives us the idea that good writers fall in love with their subjects and characters. And in falling for Sooki, Ann has us loving her, too. Their relationship is unlike anything that could be expected: the trust, the warmth, the space to be who you must. The sense of recognition of the best in each other.

At some point, Patchett answers Sooki’s concern that, as a live-in guest at Patchett’s home, she is “taking everything.”

“But of course, I was the one who took everything. Why couldn’t she see that? The price of living with a writer was that eventually she would write about you.”

Further, as a side effect of this good story well plumbed for universal truth, Patchett leaves the reader really liking her, the writer. And essay by essay, we get to know her again, like we did way back in Truth and Beauty. She has the voice of a friend, who can tell you about “stuff,” ordinary stuff that in her words, even if you have to ultimately toss it to the universe, ends up drenched in meaning. Maybe not the ultimate answers to the ever-mysteries but enough meaning to last at least for today, for as long as we reflect.

For sheer reading and reflecting pleasure, These Precious Days is a treasure. Good enough to read in bits and pieces, to read before bed, to discover upon waking. And here and there, again.  Although dog-eared, although dripped on, although coffee stained. Definitely not for the purge pile.