There Is No Year: A Novel 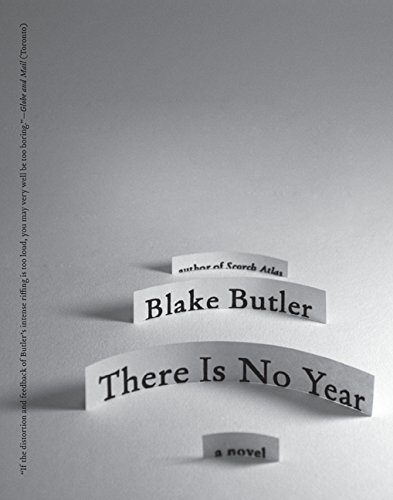 In the preface to his 2008 definitive text How Fiction Works, author and literary critic James Wood writes:

“In this book I try to ask some of the essential questions about the art of fiction. Is realism real? How do we define a successful metaphor? What is a character? When do we recognize a brilliant use of detail in fiction? What is point of view, and how does it work? What is imaginative sympathy?”

Sadly, Wood leaves one or two essential questions unlisted and unanswered: What do we do when an author chooses to throw all this away—realism, metaphor, character, detail, point of view and art? And: Without these things, is fiction possible?

These questions are raised in response to the publication of There Is No Year by Blake Butler, something that, upon first coming into contact with it, and on hefting it, seems booklike. Something that smells like that new book smell, that has pages studded with print, even an author’s picture in the back.

And yet, the question remains: How much can you strip away from a book in terms of narrative, character development, and imaginative sympathy before that which looks like a book, has a cover just like a book can be something other than an actual book?

In judging author Blake Butler’s There is No Year by its packaging, the reviewer is also judging the book by its contents, because it is all of a piece. It has all been blended, you see. Or blenderized, perhaps.

Everything, from the front cover to the back cover, including the story, from the first page to the last, has been printed on an apparently random mixed bag of colors, tones and weights of paper—all gray, black, or white—all very nice, some of which, cover included, is dense blotting paper. The title has been spelled in black ink, as if typewritten onto white strips of paper that have been placed upon a plain gray background.

All of this—and, for those who jump ahead into the text, the way in which the words are placed upon the page follows suit, with small, black words, likes lines of worker ants, jump-cut upon the dark gray page, sometimes with a line or two on the page, rarely with more than a couple of paragraphs—gives the book a look of lonesome foreboding that only actually cutting and tearing the individual letters out of magazines stolen from various dentists’ offices to shape the novel’s words could have possibly heightened. . . .

And then there’s the dedication.

Blunt, to the point, and, like the rest of the book, rather sad/rather heartless, and meant to show us a thing or two, it reads: “For no one.”

Simply put, let me say that, having actually read the book, word for word, page by page, in retrospect, the book’s dedication seems more of a warning or a threat than a simple postmodern avoidance of attachment. Worse, it could actually give an indication as to whom the author’s intended audience actually consisted of.

In creating his work, Mr. Butler has seemingly rendered all that once might have been considered essential to the art of fiction down to the bits that remain at the bottom of the pot: the boiled bone and bits of connective tissue, the occasional organ residue. He shaped the sludge into three characters, named (in proper Albee fashion) “The Father,” The Mother,” and “The Son.” He places them in a house—or rather, in a set of mirror-image houses, lawns, boxes, eggs, and mirrors—that comes with shape, but not form, without emotional context, nor coherent placement in time or space. And he sets what passes for a plot in motion with a slight shove in the form of his opening sentences:

“The father and the mother sat close together without touching. They weren’t sure which way to aim their heads. They remembered recent rooms from other buildings. The house still felt so new.”

From there, Mr. Butler apparently counts upon Newton’s First Law of Motion to keep things flowing to the end, 401 pages later.

To revisit James Wood’s How Fiction Works again for a moment, Wood acknowledges that the novel as an art form is something that needs to be reinvented from time to time. Revivified. For instance, he attributes Flaubert with the creation of what we think of as the “modern” novel. And for what Flaubert himself called the “smooth wall of apparently impersonal prose,” in which the details that the author carefully selects to share with his readers—the full details of the place and time and culture of his character’s lives narrowed down, edited as a film is edited, to present the reader with a coherent context in which his tale may take place.

To drive the point home, Wood quotes a letter written by Flaubert in 1852:

“An author in his work must be like God in the universe, present everywhere and visible nowhere. Art being a second nature, the creator of that nature must operate with analogous procedures: Let there be felt in every atom, every aspect, a hidden, infinite impassivity. The effect on the spectator must be a kind of amazement. How did it all come about?”

Certainly in the daunting and unappetizing pages of There Is No Year, author Butler manages to amaze his reader. But not, perhaps, in the manner which Flaubert intended.

Consider the drumbeats of the text:

“The table was filled end to end with food. There was so much food on the table that there wasn’t any room for plates. The family picked the things they wanted out of the serving dishes, some of which were larger than their chests: pink meats and bruised fruit, slaws and saucers, all soft enough to eat without teeth, pervaded by a common smell. No one knew who cooked the food. The father assumed it was the mother. The mother assumed it was someone else. The son didn’t think about it—he was already saying his own prayer in his head. The mother and father waited for someone to say grace. They’d been saying grace for years though they could not remember who mostly said it for them. They each kept waiting for one another to begin. Each time the father thought to speak up he’d feel like the mother was about to speak herself and so he’d stop and wait and then she wouldn’t. Under the table, the father rubbed his crotch seam with his thumb. He ate.”

Certainly, as Flaubert would have it, Mr. Butler busily plays God here, but here as in everywhere in the book, he does not do so invisibly, but leaves fingerprints smeared everywhere as he taunts his characters and readers alike with the contents of each new page.

Consider the chapter called “LATE LIST.” Consider its content, the rhythm and full freight of the words, as the father makes a list of things out of place in the house (“Son’s dolls in storage: more than a few are missing both eyes,” “Garage bees,” “Living room ceiling dripping what?”):

“When not writing, the father clenched the list inside his mouth to keep his hands free so he could rummage. He bit down so hard, not realizing, his teeth went through the paper, through his lip. The blood fed him gulping, warm as from a mother’s nipple, brown.”

There Is No Year is a work of heavy gravity. The entire project—certainly from the characters’ point of view—seems weighted in a sense of ennui bordering on the comatose.

Experimentation is among the jobs of the artist, of course. But for such an experiment to be successful, it must first and foremost be the product of an artist who has mastered his art—Picasso, ee cummings and Tristan Tzara and company at the Cabaret Voltaire come easily to mind. But Mr. Butler seems a writer who has yet to have mastered his own author’s voice and who, therefore turns instead to familiar tricks, like the young actor studying the method, who, attempting to close the imaginary valise he has so lovingly crammed with imaginary clothes, lacks the control to sit on the immaterial suitcase and falls to the floor instead.

By all means let us continue to redefine and reshape the novel. Flaubert’s “modern” novel is, after all, 150 years old. But let us do try, in redefining and reshaping, to make it something better, something more important, and not just something devoid of all those things that James Wood so rightly identifies as necessary to the art of fiction.