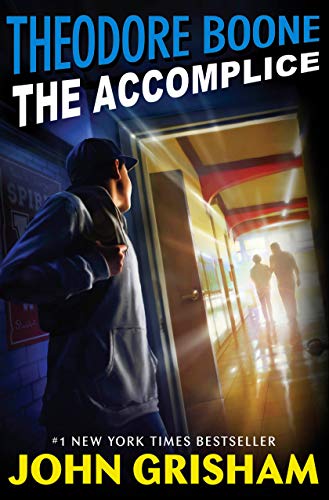 Theodore Boone: The Accomplice by John Grisham has a lot going for it. As part of an already successful series of Young Adult books penned by one of the most prolific, successful, and well-loved writers of legal thrillers in the country, it will very probably become a bestseller despite the fact that it just isn’t a very good book.

Theodore Boone is 13 years old, the only son of a family of lawyers: his mother and father, as well as his uncle Ike. Because of this, he seems to know many of the judges, bailiffs, lawyers, and secretaries—yes, he still calls assistants secretaries—in the medium-sized city of Strattenburg, Pennsylvania in which he lives, a place that feels smaller than it can be by virtue of all the fantasy elements of 1950s Middle America nostalgia the author piles on.

When his best friend Woody Lambert (whom he doesn’t seem that close to in the beginning) is arrested for armed robbery, Theo springs into action, working the legal system like a pro, first to get him freed on bail, and later to help him be exonerated from unjust charges.

But Theo Boone: The Accomplice is no To Kill a Mockingbird. It’s not even Encyclopedia Brown because, as fiction—we are not daring to aspire to literature here—it has several serious problems.

Theo does not think or act or speak like a 13-year-old child, bright as he might be. Here he is, talking to his dad about his friend, well before Woody gets into the trouble that results in his arrest:

“You know Woody, Dad. He’s a popular guy who gets a lot of respect because he’s the toughest kid in class. If there’s a fight, Woody either starts it or finishes it or breaks it up. Nobody messes with him, and he sort of likes his tough-guy role. It looks like Woody is headed down the wrong road, at least in my opinion. I wish there was some way we could help him.”

Who talks like this at 13? No one, that’s who. And then there’s the predictability. Everything is so thoroughly and obviously foreshadowed that you can guess even those events that aren’t already part of every old detective TV show lore (like the tough guy that gets put into the cell with the innocent guy so that he is further punished for defending himself) coming from a mile away (cliché intended), and so will any teen out there. (They are young people, not recluses.)

And then there’s the problematic tone and subtext that runs through the whole book. It’s not enough that there is an obvious attempt to proselytize about “America’s unfair bail system” and other legal maladies in a book intended for readers young enough to be just hearing about these things for the first time, and impressionable enough to have a book they like make up their minds for them. There are also some disturbing attitudes about women peeking out from the narrator’s voice in all sort of inappropriate ways.

For example, on page four, here’s how the narrator, a third-person Theo, talks about Woody’s situation:

“Theo had known him since the 4th grade when the Lamberts moved to Strattenburg. Their home was unstable. His mother was on her second or third husband, and the current one was often away on the job. His real father had disappeared years ago. His older brother Tony had been arrested once and was gaining a bad reputation. Theo suspected that the Lamberts were having serious problems and that was why Woody seemed so unhappy.”

Never mind a 13 year old making such a cold assessment of a friend’s family, but why is that 13 year old judging a woman’s number of husbands in such a disrespectful tone? And why is such a well-known, respected author bothering to make such a crude point in such an unartful way in a book aimed at children in their early teens? If a child reading this comes from a broken home, what is there stopping that child from thinking badly of women in his life who have divorced once or more?

And where is the man’s responsibility in all these divorces? The men divorced or estranged are nowhere to be found within this storyline, and there is a difference in how they are treated in the book.  In the very paragraph just alluded to, you come away feeling like the father who disappeared gets a better rap than the mom working two jobs to take care of Woody and Tony.

For the record, Woody, too, makes just such a cold-hearted assessment about Garth, the villain of the book, and makes it in the same jaded adult voice just a few degrees removed from the way Archie Bunker might have said the same thing as part of 1970s satire of the 1950s mindset in this country.

Even later, when Theo’s mom—a divorce lawyer, mind you—is trying to help Woody’s mom come up with the money for his bail, here’s the exchange between them:

“What about your husband?” Mrs. Boone asked.

“Which one?” [Supposedly this is something a woman would ever ask.]

And this is only one of several troubling moments when it comes to women, here either “secretaries” who are the models of efficiency keeping powerful men organized, or “cute” prosecutors, or women getting divorces, always crying when they visit Theo’s mother’s office.

There are also some lines about guns in the house (perfectly normal in this day and age?) and smoking (Theo finds his father nonstop cigar-smoking aroma comforting and “rather pleasing”).

And where the legal system is concerned, it’s clear you don’t have a prayer unless you have money, or a friend who knows the ropes, which, as crassly and repetitively as the point is made, does lead us to the book’s one redeeming value: a way, perhaps, to teach kids some of the basic concepts of our legal system.

Like when Theo explains to his debate class what bail is, or defends a wandering rabbit in animal court (the one salvageable chapter in the entire book), or explains to us the origins of the public defender system:

“And since the Supreme Court had ruled that every defendant is entitled to a lawyer, Stratten County had created, long before Theo was born, the office of the public defender.”

Then again, if you want to give the gift of a book to a teen in your life, there are better ways to teach them about the legal system, than by spending your money on such a flawed hardcover for info you can find online.

A better use for your hard-earned money and time is to research the list of Newberry, Belpré, or Geisel Medal award-winning books and buy one of those. You’ll be teaching that teen you love the value of an enjoyable, well-written, propaganda-free book instead.