The Theft of a Decade: How the Baby Boomers Stole the Millennials’ Economic Future 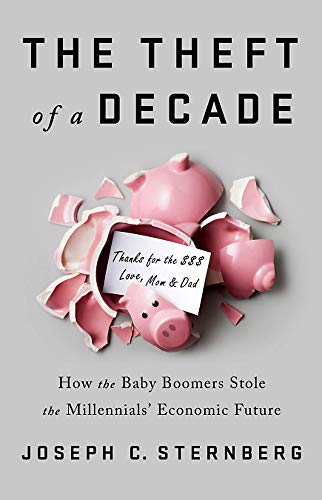 “a smart, data-driven proof of the plight of Millennials.”

Sternberg humorously begins his book with “This is a book about avocadoes.” He then quotes critics of Millennials with the gist being that, if Millennials simply gave up their morning avocado toast and $3 coffee, they could save enough to buy a house, and then, just maybe, they would stop whining.

Given that Sternberg himself is a Millennial, one might expect the rest of the book to be a defense of the Millennial lifestyle, light on evidence, and long on complaining. Instead, Sternberg, who serves on the editorial board of the Wall Street Journal, offers a smart, data-driven proof of the plight of Millennials.

His argument is that the Baby Boomers, the Millennials’ parents, have bequeathed to them a bad job market, a bad housing market, the burden of student loans, and the much bigger burden of paying for the entitlements under Social Security and Medicare.

Another possible surprise for the reader is that a substantial portion of the book is an agile retelling of economic history to set the context for the Millennials’ plight. This ranges from the reasons for the loss of manufacturing jobs in the U.S. in the 1970s to the causes of the financial panic of 2007–2008 plus the Great Recession that followed.

A central reason for the bad job market, writes Sternberg, is that government policy made capital cheap and labor expensive—so much so that investment in new capital equipment was used to cut jobs, not to enhance labor’s productivity.  Investment capital was cheap after the 2007–2008 crisis because of the Federal Reserve’s aggressive intervention. The federal funds rate, the short-term interest rate at which financial institutions lend to one another overnight from reserves, “would stay at essentially zero for nearly seven years.” And the Federal Reserve attempted to lower long-term interest rates, too, through “quantitative easing;” the Federal Reserve bought bonds and other assets sufficient to boost its balance sheet “to roughly $4.5 trillion from around $900 billion before the crisis.” The Affordable Care Act, or Obama Care, is at the top of Sternberg’s list of policies that increased the cost of labor and contributed to the bad job market for Millennials.

The bad housing market was the result of government policy, starting in the 1990s, meant to promote home ownership. Sternberg recounts the story of Congress pushing Fannie Mae and Freddie Mac to get mortgages to mid- and low-income families. To do so, these two unique government agencies cut the required down payments and lowered credit standards. Complex “mortgage-backed securities” also were used and private financial institutions joined in from around the world.

It was soon clear that many families were signed up for mortgages they could not repay. Moreover, it became clear that another presumption of the policy was not true: housing prices would not always go up, those prices could fall, too. And they did fall, putting even more pressure on families with mortgages they could not repay. The problem for the Millennials, as Sternberg sees it, came when the federal government tried to blunt the effects of the housing crisis by propping up housing prices to stem foreclosures; that left housing too expensive for Millennials. And housing prices rose even more in places like Silicon Valley where the jobs were.

The burden of student debt, Sternberg believes, resulted from overselling the prospects for a payoff to a four-year college degree. Despite the rise in the cost of college, Millennials and their parents bought more, not less education. To illustrate the point, Sternberg reports that, in 1991, 70% of Millennial high school graduates attended college while, in 1963, only 54 percent of Boomers did so.

By 2018, the total outstanding student debt was $1.4 trillion. And those who took loans accepted the presumption that there was a “wage premium;” that is, those with a college degree would earn more than those who did not. Sternberg uses his own analysis to make his point that the wage premium is not inevitable. He writes that “the top 25 percent of high-school-only workers earn at least $50,000 per year, more than the lowest-earning 25 percent of” those with a Bachelor’s degree.

In addition, Sternberg expects little true relief from student debt. For example, even if the amount of Millennial student loan repayment was limited, as President Obama had proposed, who would make up for that? It would be Federal taxpayers and, at the time those loans were due, those taxpayers would be Millennials. He concludes that “President Obama’s big show of generosity toward Millennial students amounted to forcing us [Millennials] to make a gift to ourselves.”

The burden of paying for entitlements reflects a well-publicized, decades-long debate concerning who would pay for the expected shortfalls in Social Security and Medicare. In that sense it is nothing new, but it does amount to a potentially huge burden on Millennials—the ones who will be paying into the programs as Boomers retire.

What are the Millennials to do given their plight? Sternberg writes with optimism that Millennials are “one of the smartest, most ambitious generations the world has ever known. It’s time for us to take our fate in our own hands.”