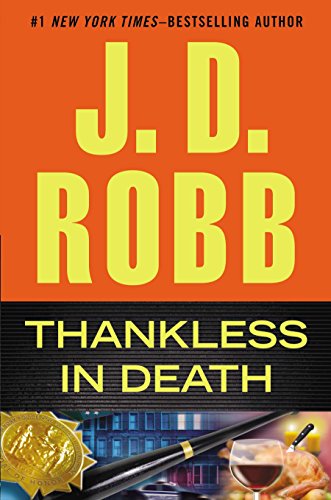 There are so many “In Death” novels now—this is number 37—that it’s starting to feel like one of those long running TV cop shows with edgy dramas and a terrific ensemble cast.

As with a favorite show, you block out the time to watch every episode and do so with unfettered pleasure.

This episode, no mystery: The whodunit and how/why are known up front, so the story is a manhunt, all police procedural and chase. But because it’s a J. D. Robb (pen name of Nora Roberts) novel, the crime element is interwoven with family and love stories, featuring, as always, Lieutenant Eve Dallas and her husband Rourke in a futuristic New York City.

Both Eve and Rourke have parental backstories involving death and violence, so it’s been important to them through the series to build a loving family from scratch. That underscores this book’s theme of thankfulness, contrasting with the killer’s lack of same.

Jerry Reinhold is an arrogant and selfish person without a conscience, who thinks he’s entitled to everything without working for it. After he murders his parents for pushing him to grow up, he discovers his talent and purpose in life—killing—and goes on a spree.

Although not a 100-watt bulb intellectually, Jerry is cunning enough to keep ahead of the police thundering after him, trying to anticipate his next move. But more victims fall before Eve and company can intercept him, disrupting everyone’s Thanksgiving period.

Eve is plenty challenged off the job by hosting her husband’s big, boisterous family, over from Ireland for the holiday. She’s still feeling-out the concept of family, as evidenced by this snippet of dialogue with the chief medical examiner after an autopsy:

“‘Dallas, let me thank you in advance for Thanksgiving. It means a great deal to me to be included with your family and friends.’

“It made her feel a little weird so she shrugged. ‘Hell, Morris, how many dead have you and I stood over together? If we’re not family and friends, what are we?’”

Yes, underneath everything Eve is all cop, and we can’t help but share her passion for justice. In this book, however, we don’t get to spend enough time with her, as Ms. Robb detours the narrative into Jerry’s head for all his kills.

This makes us hate him and spurs us to hope-hope-hope Eve will catch up to him. During the chase, we are thankful, ourselves, for her smarts and connections and fabulous support people.

But too much of the book is devoted to Jerry if you’re reading for the regulars. Ms. Robb makes up for that by treating us to an excellent fight (and making-up) scene between Eve and Rourke.

Never far off-plot in these books is the idea of romantic marriage. Eve and Rourke live and work so closely together, in such unconventional and conflicting circumstances, that it’s hard to imagine that they or anyone can maintain love and hot sex.

Yet they manage just fine, in surprisingly credible dialogues and clinches. People who read these books for the romance find them to be primers on how to actualize romance in their lives.

They also serve as models for successful teamwork and determination. Ms. Robb has mastered the art of presenting credulity-stretching scenarios believably without overdoing it, and characters who are believable despite being larger than life.

This combination makes for entertaining and satisfying reading—and devotees who count the days until the next episode comes out.