Thank You for Your Servitude: Donald Trump's Washington and the Price of Submission 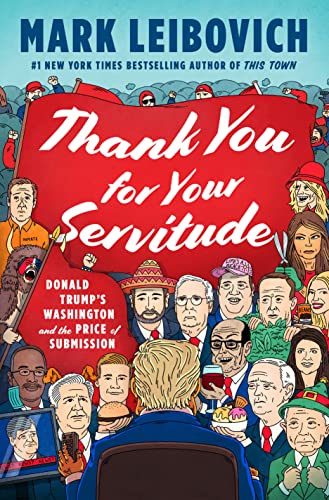 “Often viciously funny, this book is a breezy balm for the anti-Trump crowd.”

In his last book, This Town, a bestseller, Mark Leibovich offered an amusing view of the Washington, D.C., political merry-go-round, which he covered for years as chief national correspondent for The New York Times Magazine. Now comes Thank You for Your Servitude, which focuses on the Establishment Republicans who made President Donald Trump’s election possible.

They include Marco Rubio, Ted Cruz, and all the rest—card-carrying Republican politicos whose failures to halt the Trump ascendency are well known. But Leibovich is not out here to break hard news. Rather he focuses on why mainstream Republicans bowed in submission, an understanding he gained mainly from spending time schmoozing over drinks at the Trump International Hotel.

Known variously as “America’s Living Room,” “the Mother Ship,” and simply “Headquarters,” the Trump International Hotel in DC opened on Oct. 26, 2016, quickly becoming the gilt-and-velvet meeting place where Trump loyalists like Rudy Giuliani could mingle with lobbyists and foreign officials hoping to sidle up to the administration.

Its Benjamin Bar & Lounge, just off the lobby, served candied bacon appetizers ($22) and designer cocktails in glasses coated in caviar (more than $100).

There, in the only “sanctuary” in the city, Republicans could avoid harassment when dining out. It was also the only place in town where the president himself would come for his usual steak dinner.

“I always figured that a decent portion of the clientele was just hoping to get lucky and catch the president in his abundant flesh as he peacocked his way to Table 72, his regular round booth in the middle of the mezzanine,” writes the author. “They were like those obsessed bird-watchers who showed up at some remote locations in India on the very small chance they’d catch a glimpse of the white-bellied heron (an actual rare bird in India!).”

“I saw Trump coming down from dinner once,” a former chairman of the Republican National Committee tells him. “It was fucking crazy. Trump made this slow walk down the staircase overlooking the lobby. People were cheering and chanting and standing on the tables, and he would be waving like a tin-pot dictator.”

In a bright narrative filled with irreverent observations, Leibovich skewers the Trumpian politicians while examining their motives for acting like vacuous stick figures while the Donald steamrolled over them. It makes for funny yet very dark reading.

They were “leaders willing to discard every principle they once held for the purpose of staying in office,” writes Leibovich. “They refused to stop [Trump] even after the U.S. capitol fell under the control of some madman in a Viking hat.”

In fact, he surmises, these politicians were all waiting for Trump’s “pivot.” That is the moment when a leading presidential candidate “would evolve into a more suitable version of a mature nominee. In Trump’s case, ideally, that meant scaling back his racist-uncle, insult-mongering open-mic act.”

“The notion of a Trump pivot was of course preposterous. While he was certainly capable of altering his views with stunning speed, it would maybe be more difficult to pivot away from saying Mexicans were rapists.”

Stephen Miller, “the president’s droopy-eyed deportation zealot,” pranced about in the hotel—a nice change of pace from his DC apartment, where nearby lampposts displayed WANTED posters bearing his likeness.

Lindsey Graham, the senior senator from South Carolina, would tell golf stories about Trump, his new partner on the links, about whom he said earlier: “I think he’s crazy . . . a race-baiting xenophobic bigot.”

Jeff Flake, former Republican senator from Arizona, who quit Trump early, said, “The idea is to just embrace the president and hope he embraces you back. And then try to sleep at night.”

As for dealing with Trump in 2024, a former Republican congressman told Leibovich, “We’re just waiting for him to die.” He was “100 percent serious,” writes the author.

Often viciously funny, this book is a breezy balm for the anti-Trump crowd.