The Thank You Economy 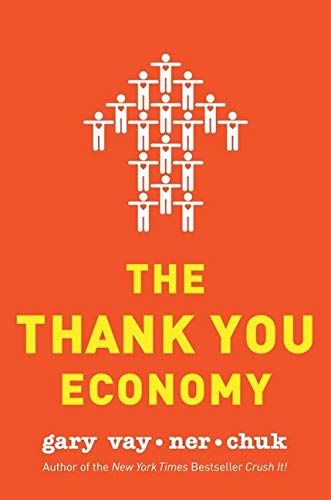 In The Thank You Economy, Gary Vaynerchuk shows why he’s such a popular speaker and author in the business world and one of the top 100 people followed on Twitter. Simply put, not only does he understand that the “new economy” is the “thank you economy,” but he also understands how to explain why in an engaging and convincing way.

Unlike the academic rigor of books like Good to Great, The Thank You Economy doesn’t focus so much on the minutiae of case studies; rather, it provides broader strokes with specific examples of companies that understand and exploit the thank you economy—and those that don’t.

As for what the thank you economy is, Vaynerchuk calls our interconnected, wired community “the Thank You Economy, because only the companies that can figure out how to mind their manners in a very old-fashioned way—and do it authentically—are going to have a prayer of competing.” He argues that, in many respects, we’ve come full circle:

• establishments once treated everyone with a modicum of respect because they knew that their reputations were on the line in a small town;
• but as people traveled farther from their homes, a broader customer base was available for businesses, which could then focus on providing lower prices versus higher services—this, in turn, meant that it was highly unlikely that any one interaction would really affect a company’s reputation;
• however, with the internet and the interconnected world, a single bad experience can have devastating effects on a company’s bottom line.

Consider the author’s example of Giorgio Galante, who had the audacity to complain via an email to AT&T CEO Randall Stephenson and “received a voice mail from someone on the AT&T Executive Response Team threatening legal action should he try to contact the CEO again.” But with the internet, Galante didn’t just sulk quietly at his desk; rather, he wrote about it via a blog and soon, the story was known far beyond Mr. Galante and Mr. Stephenson’s email inboxes.

And now you know it too.

Mr. Vaynerchuk convincingly lays out his argument that this new economy results in the humanization of business (again) and how it benefits everyone. Moreover, those that “out-care” and “out-love” their competition—as ridiculous a sentiment as that is to say—see the greatest gains.

Beyond being informative, however, The Thank You Economy is just plain entertaining and one gets both an education and a quick and fun read.

Pick it up—you’ll thank me.