The Texas Chainsaw Massacre: The Film that Terrified a Rattled Nation 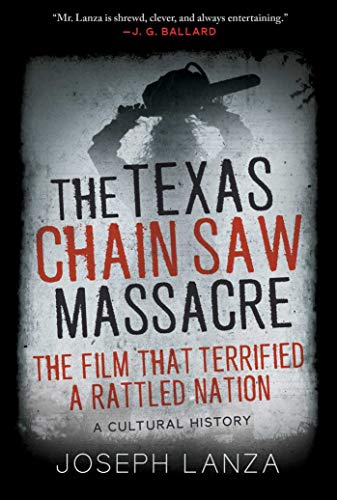 Released on an unsuspecting world in 1974, Tobe Hooper’s The Texas Chainsaw Massacre is one of the most revered and reviled horror films of all time. Considered a classic now, the movie was once heralded as the death of Western civilization—a pornographic exercise in extreme violence.

Joseph Lanza, in his latest book The Texas Chainsaw Massacre and Its Terrifying Times, makes the argument that the film was nothing more than a mirror (a distorted one, to be sure) held up to the ugly face of the early 1970s. Besides the skin-wearing ghoul Leatherface, the other villains in this pop history are President Richard Nixon, the Vietnam War, the 1960s counterculture, solar flares, and New Age voodoo.

Serial killers also appear, most notably the Wisconsin madman Ed Gein, whose necrophilia inspired Robert Bloch to write Psycho. Lanza also stretches a lot of miles out of the importance of hitchhiking in The Texas Chainsaw Massacre and the gruesome crimes of real-world hitchhiker killers like Dean Corll of Houston, Texas, Edmund Kemper of Santa Cruz, California, and the still unidentified Santa Rosa hitchhiker murderer.

At some point this book, Lazna notes Hooper’s appreciation for Charles Fort, the Victorian American collector of all things strange and arcane. Fort’s entire life was dedicated to showing how strange, seemingly unrelated events commingled with each other almost like a supernatural game of tag. Fortean themes abound in The Texas Chainsaw Massacre. For instance, the radio announcer that appears throughout the film talks about solar flares, an oil crisis in South America, and a rash of grave robberies and desecrations in fictional Muerto County, Texas. None of these events can be directly tied to the cannibal Slaughter clan, and yet Hooper’s film seems to suggest that Leatherface’s brood are both dabbling in grave disturbances and are being affected by Mother Nature’s mean streak.

Lanza’s whole point for making this book is to show that the storyline for The Texas Chainsaw Massacre draws “both consciously and unconsciously from events and moods.” Thus, Hooper’s landmark slasher movie includes “social, political, and personal themes” that make The Texas Chainsaw Massacre “more than a movie.” That may be true, but Lanza’s argumentation is very faulty. Indeed, Lanza takes Fort as his guru and tries to make an argument out of a series of unrelated incidents that all happened around the same time.

Yes, it is likely that the discovery of Dean Corll’s murder house influenced the cast and crew. Similarly, Hooper’s love of Fort more than likely lead to his decision to add a subtext of atmospheric disturbances in his otherwise earthy horror flick. However, Lanza makes no real sense when he tries to lump in Hooper’s first-hand experienced with the University of Texas, Austin gunman Charles Whitman, nor is he believable when he tries to somehow insert “Tricky Dick” and the oil crisis into what appears to be an apolitical nightmare.

The Texas Chainsaw Massacre and Its Terrifying Times is an example of trying to do too much and making mountains out of clouds. While an entertain read written in a fun style, Lanza’s latest cultural history is not as convincing as it could be.