The Philosophy of Horror (Philosophy Of Popular Culture) 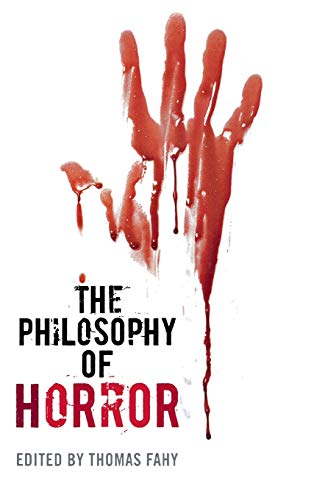 If you’re a horror enthusiast and have often wondered what makes horror so popular and what compels people to watch it or read it in spite of the fear it creates, then you’ll enjoy this collection of original essays edited by Thomas Fahy.

In his introduction, Fahy quotes Stephen King: “The worst has been faced and it wasn’t so bad after all.” This feeling is often experienced by horror fans. When you watch a horror film, you might feel fear, anxiety, threat, and even repulsion, but these are replaced by a feeling of relief when the film is finished and you walk out of the cinema into the “safety” of broad daylight. Fahy compares this sensation to the thrill of a roller coaster ride. Such is the seductive power that horror holds for some people.

The Philosophy of Horror explores film, literature, and television and tries to answer complex questions such as: What is horror? What is good about it? Is it morally right to enjoy a horror film that depicts sadism, torture, and murder? Can torture ever be justified, and can the audience’s enjoyment of torture ever be justified? Why are horror films usually so graphic? Is it only because of their shock value?

The answers presented by the various writers are fascinating, revealing and insightful. The reader will be glad to find out that enjoying a horror film doesn’t necessarily mean condoning the violence, and as Jeremy Morris suggests in one of the essays, the audience’s response is merely an acknowledgment “that an empathetic person can share in the pleasure of both moral and immoral acts.”

The book explores old classic movies like Psycho and The Birds, recent torture films such as Saw, Hostel, The Texas Chainsaw Massacre, and The Devil’s Rejects, as well as reality television shows, among others. In doing so, some of the horror plots are examined in relation to other topics such as terrorism, retribution, justice, the concept of the family unit, and Kantian philosophy.

In his essay, “Through a Mirror Darkly,” Phillip Tallon argues that the value of horror is in “how well it can inform and enlighten our vision of the world by reminding us of our inner moral frailty and by forcing us to take seriously the moral reality of evil.” He also suggests that part of the enjoyment of horror is that it is a communal experience. Often horror movies are watched by a group of friends and/or in the collective setting of a movie theater. When an unexpected scary part arrives, everybody jumps in their seats and gasps at the same time.

Frankenstein, vampires, and zombies are also discussed, though this reviewer did not find the essays relating to them as engrossing as the first ones dealing with the topics mentioned above.

The Philosophy of Horror is an intelligently written, perceptive, engrossing work that attempts to answer many disturbing questions. The arguments are presented in a clear manner and are supported by appropriate examples. The writers include summaries of the various movies mentioned for those readers who aren’t familiar with them. There are a few black and white photos as well, though not many.

The Philosophy of Horror is recommended not only for enthusiasts of the genre, but also for anyone who has ever wondered why some people enjoy horror films. The book raises some questions about our own psyche worth pondering about.