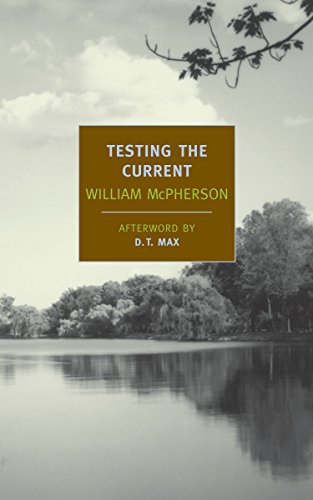 Because as much as the inhabitants carry on as though nothing is wrong, clinging to their genteel middle-class lives of privilege and privacy, their town—like the rest of the country—can’t escape the effects of changing attitudes wrought by the Depression that’s just passed or the war that’s threatening to erupt in Europe.

First published in 1984, apparently to huge acclaim, Testing the Current has been out of print for 20 years—a literary wrong that has thankfully been put right.

Too young to be a classic, yet too old to be entirely contemporary, the book is, however, beautifully written and astoundingly on target in its presentation of social mores as it pierces the veneer of respectability worn by its characters. The universal issues it encompasses of race, religion and “the commandment least talked about in Sunday school”—adultery—are limned in language that’s a delight to read.

Events are seen and filtered through the eyes and mind of eight-year-old Tommy MacAllister, whose awakening sense of right and wrong is hastened by the broken moral compasses of those around him—like Mrs Slade,“the only woman he knew who could really swear, who stayed in bed a lot, who wore negligées, or even used the word, and who would fling a fur coat over her shoulders and say, ‘Well now, Tommy, how does Mrs Rich Bitch look today?’”

The skillful storytelling in Testing the Current is such a joy one can only hope it is successful enough for the publishers to also reissue Mr. McPherson’s second book, To the Sargasso Sea—originally published in 1987—which picks up when little Tommy is a 40-year-old playwright.