Tesla: Wizard at War: The Genius, the Particle Beam Weapon, and the Pursuit of Power 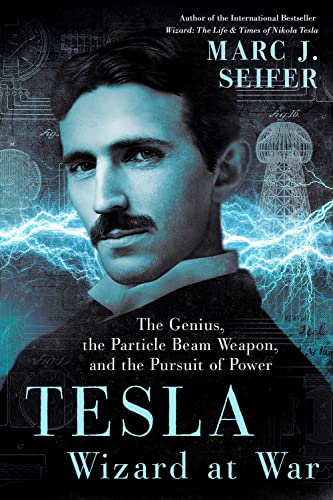 “‘The scientific man does not aim for an immediate result. . . . His duty is to lay the foundation for those who are to come, and point the way. He lives and labors and hopes.’”

These are the words of Nikola Tesla. Today, when one hears the word Tesla, one thinks of the electric car company pioneered by Elon Musk. Often forgotten, it also refers to Nikola Tesla (1856–1943), the remarkable Serbian American physicist, engineer, and inventor.

Tesla: Wizard at War is Marc J. Seifer’s latest study on the noted inventor, having written his doctoral dissertation on Tesla and an earlier biography, Wizard: The Life and Times of Nikola Tesla. This work is distinguished by the author’s exhaustive research, including extensive quotes from Tesla’s letters and diaries as well as comments from innumerable people—both famous and long forgotten—who crossed paths with him.

The book provides a brief recap of Tesla’s early life in Serbia and his academic life in Germany, Austria, and Prague. In the late 1870s, he lived in Budapest and worked at the Telephone Exchange where he outlined innovations in alternative current (AC) electrification that would transform modern life.

In June 1884, Tesla immigrated to the U.S., settling in New York. As the much-repeated story goes, he arrived with four cents in his pocket and a letter of introduction to Thomas Edison that stated, “My Dear Edison: I know two great men and you are one of them. The other is this young man!” Tesla worked at Edison’s Manhattan facility but only for one year, quitting after Edison refused to honor an agreement to pay him a $50,000 bonus for resolving problems with direct current (DC) power design flaws.

Tesla’s AC design drew the interest of George Westinghouse, who licensed his patents for $60,000 in cash (about $2 billion in 2022 dollars), stocks, and royalties based on how much electricity Westinghouse could sell. Their collaboration on AC was successfully displayed at the 1893 World Columbian Exposition in Chicago and at the first hydroelectric powerplant in Niagara Falls in 1895.

Seifer follows Tesla’s meandering career, offering revealing discussions of such issues as the discovery of terrestrial stationary waves and what became known as “Tesla Coils,” a technique that made it possible to send and receive radio signals.

In 1897, Tesla filed the first U.S patents for radio transmission; however, Guglielmo Marconi filed the first wireless telegraphy patent in England in 1896 and, in 1901, he successfully transmitted the first trans-Atlantic telegraph signal from England to Newfoundland. He was dubbed “father” of the radio and was awarded a Nobel Prize for his invention. (In 1943, just after Tesla died, the U.S. Supreme Court upheld Tesla’s patent claims for the radio.)

“Since a year, Mr. Morgan, there has not been a night when my pillow is not bathed in tears, but you must not think me a weak man for that. I am perfectly sure to finish my task come what may.  . . . In the hope of hearing from you favorable . . . “

As Seifer adds, “The magnitude of Tesla’s suffering during the collapse of his Wardenclyffe dream was not only kept from public view, it was also kept from Tesla’s biographer, John O’Neill, who knew Tesla for forty years.”

The next half-century of Tesla’s life was lived in the shadow of the Wardenclyffe failure, fostering innumerable innovative concepts but none coming to the professional and financial success he sought. It was a decisive era, marked by never-ending battles with Marconi, loss of business with Germany due to World War I, and failure with other innovations.

Memorable biographies uniquely combine rigorous research with lyrical, narrative storytelling that captures both the individual and the world they existed within. Seifer is a rigorous researcher, clearly having spent much of his adult life following Tesla’s trail. His innumerable quotes from Tesla, his associates (both scientific and social), and secondary source material is exceptional.

However, at the end of this exhaustive study, one is left with the question: Who was Nikola Tesla? Not the inventor and theorist, but the man? Only toward the end of his study does Seifer ask the question that’s haunted the story: “Was Tesla homosexual?”

Seifer speculates: “if he had that attitude, it is doubtful that he acted on those urges.” And then adds, almost surreptitiously, “He was indeed attracted to muscular men as boxers.” It’s not clear what the author means by the term “attitude”? Surely, in 21st century America, gender is more than an attitude?

Seifer then notes: “What we can say for sure is that he lived a life of self-denial and, in that sense, self-transformation. Tesla was committed to his work. When it came to his sexual nature, he showered his affection on the city pigeons, he had intimate friendships with people of both sexes, and he devoted his life to changing the planet for the betterment of mankind through the powers of his celebrations.”

For decades Tesla lived long periods of time in some of New York’s finest hotels, but couldn’t pay the bills—the Westinghouse Corp. picked up the tab.