Terrific Timelines: Fashion: Press Out, Put Together and Display! 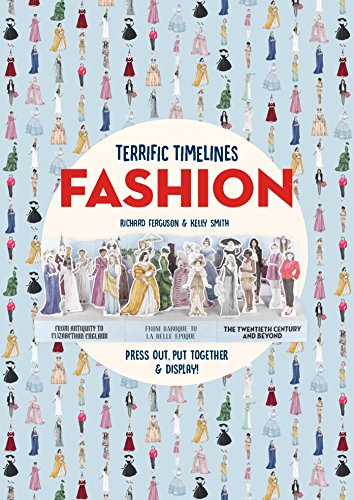 Hands-on assembly is the result of this project based book, Terrific Timelines: Fashion. Part of a series of Terrific Timelines titles, including chronologically lined-up Dinosaurs and Cars. In this case Fashion takes the spotlight focus on a runway all its own.

First a little something about what this is not. It is not a paper doll craft project, even though the reader will punch out paper doll-like objects and end up with a 3D diorama. It is not a fashion design creativity tool, allowing the designer to go with their own imaginations dressing-up dozens of original outfits. It is also not a droning, exhaustive history lesson, but history does come alive in a unique “fashion.”

That said, what the reader should expect is a solid combination of half factual information and half tactile manipulation.

The timeline aspect starts in Ancient Egypt (3150–330 BCE) where staying cool was the primary requirement for clothing and very few people, except of course the pharaohs, supposedly cared about fashion. Wandering along the centuries through Greece, Italy, England, France, and the United States, we stay involved in the dictates of the clothing of the Western world. From diminishing time spans of thousands of years, to hundreds, and finally to decades, the timeframes narrow considerably as the 21st century approaches.

Consistent presentation of information gives each page a cohesive feel. One page is allocated to each era. On each page is a summary of the unique aspects of the style. Fun facts are highlighted in side bubbles; “Fashion Forward” trivia points out what to look for further down the road, and “In Fashion” tags summarize key elements for easy comparison across the styles. Illustrations from the actual cut-out models round out each page. A glossary at the end of this section helps readers remember what kaftans, peplums, and samites are.

The second section of the book provides all the materials needed to make the timeline. A handy pouch inside the back cover holds the six parts for the stand and backdrop. It also has basic assembling instructions that immediately caused problems for one not accustomed to following directions. The instructions indicated that the pieces would be labeled A and B, which they were not. But with only two pieces for each section it should not be hard to figure out what goes where. The picture of the final product on the back cover helped.

Fumbly middle-aged fingers had a hard time keeping the paper tabs in the correct slots and one could imagine this process being much easier for a ten year old. Same holds true with the four pages that contain the cut-outs. The paper is not very thick and an arm here and there can easily tear; dexterity is required.

Adding the cut outs to the stand completely displaced the two-piece stand assemblage. This is probably a no-win situation with neither option, adding the cut outs before or after putting the stand together, easier than the other. Not particularly durable, even with the tabs taped down, interaction with this project will probably end here, displayed decoratively on a shelf, just as promised in the book’s subtitle.

The final product is a fun runway catwalk, or stage, with a visual array of the key historic changes in women’s dress styles. Yes, women’s. What is conspicuously missing is a representation of men’s fashions on the project’s runway. Men’s clothing was included earlier in the text portions and illustrations, yet failed to make the transfer to the timeline. Another odd omission, particularly for a timeline, are numerical dates. Instead of date ranges, each model is labeled with a name for the style’s era: Ancient Rome, Crinolinemania, Swinging London.

An interesting topic, an involved project, and the bonus results of a sense of accomplishment and mastery of material. There is a lot to like about Terrific Timelines: Fashion.