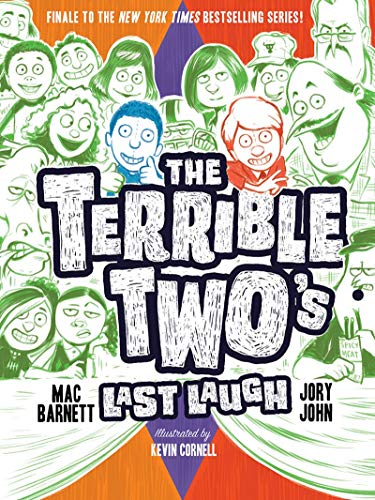 “strikes a sweet and wistful note, focusing on true friendship and how it endures through life’s changes. All in all, a fitting farewell for the Terrible Two.”

In this grand finale to the Terrible Two series, it’s Miles’ and Niles’ last year at Yawnee Valley Science and Letters Academy, and the Terrible Two have one goal: pulling off an epic prank. They want to make it something for the record books, something that will last as their legacy.

At first glance, all should be smooth sailing for these master pranksters. Their nemesis, Principal Barry Barkin, has become a convert to pranking. In fact, he even considers himself a PP, or Pranking Principal, although he still has much to learn. And The Terrible Two have got the school wired. Or so they think.

Then, disaster strikes. Miles and Niles learn that their principal’s mean father, Bertrand Barkin, has become Acting Superintendent, and has dedicated himself to exacting revenge on the Terrible Two.

Barnett and John tell their tale in a strong comedic voice that often breaks the fourth wall to address the reader, as in this comment on one of the delightful illustrations that pepper the book:

“We realize this picture, rendered only in black ink, will not help you decide for yourself whether Bob’s cow is blue. Sadly, we cannot afford to print these books in color. Still, we hope you enjoyed the illustration. That’s a very good-looking cow!”

Or, when giving a recap of the action from earlier books:

“If you have read the first three books in this series, you already know all this. You could have skipped the last two paragraphs. But it’s too late now. Sorry.”

The writing is punchy, rhythmic, and frequently hilarious. As they detail the Terrible Two’s search for the perfect prank (and many smaller pranks along the way), the authors are unafraid to head off on goofy tangents, like this one:

“[Coach O’s] gaze softened as he imagined what it would be like to have three hands. With three hands, he would have almost certainly made quarterback in college, and probably would have gone on to play pro ball. He’d be on the front of a cereal box right now, instead of trying to figure out if a couple of doctor’s notes were forgeries.”

Throughout, Cornell’s wacky illustrations add an extra dimension to the story, providing a lively counterpoint to the text and engaging reluctant readers.

The Terrible Two’s pranks, like painting polka dots on cows and leaving crop circles to suggest that aliens did it, and locking a bully’s Levis with a padlock, are just as off-the-wall as in earlier books. But by the ending, this book also strikes a sweet and wistful note, focusing on true friendship and how it endures through life’s changes. All in all, a fitting farewell for the Terrible Two.