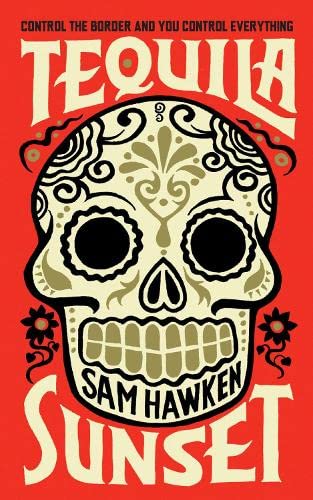 “One of the finest crime novels this year.”

Sam Hawken’s debut novel, the critically acclaimed The Dead Women of Juarez, was one of the highlights in crime writing in 2011.

Based on the true crime of the mass murder of hundreds of women in and around Ciudad Juárez, it told the story of Kelly Courter, a washed-up Texan boxer, and Rafael Sevilla, a Mexican detective, two men obsessed with seeking the truth about the female victims of the Mexican border wars.

Tequila Sunset has similar settings, but totally different theme and characters. El Paso and Ciudad Juarez sit across the Texas/Mexico border from each other. They share streets, industry—and also crime. One gang claims territory in both: the ruthless Barrio Azteca, or as the Mexicans call them, Los Aztecas.

The Aztecas have no qualms about crossing the line, about killing, about moving their deadly product. This single criminal organisation is responsible for most of the homicides committed in Juarez, and Felipe Morales—or Flip as he’s known to his friends—is one of them.

Flip was recruited in prison; now on the streets of El Paso, he has little choice but to step further into that world, despite the fact he has a terrible secret that threatens his life.

A witness to murder and intimidation, he tries one desperate gamble to get out, hoping to find a life without violence and bloodshed; hoping to be with his newfound love, Graciela, the only woman able to help him escape his past.

On the American side, Detective Cristina Salas struggles to balance the needs of single motherhood and a child with autism, with those of life in the city’s gang unit.

When her path crosses with Flip, their relationship will spell the difference between a life behind bars for the young gang member or freedom. It could also result in death.

Meanwhile, Mexican federal agent Matías Segura must contend with the scourge of Los Aztecas while coordinating a long-term operation with the American authorities, and trying to keep his family life from falling apart. Like any other Mexican cop, he’s a target, all the more so because of his position.

But the hard-as-nails Matías does not take threats sitting down, nor does he do things in small measures. He has his own special blend of justice in dealing with gang members and murderers, and it’s not for the faint-hearted or those filled with moral righteousness:

“Matías arranged for six of the Aztecas to be taken from their cells after dark and without warning. Flashlights were shined in their faces and then black bags were put over their heads. They were chained hand and foot and forced to shuffle their way barefoot along to the interrogation rooms.

“He let them sit in the rooms for an hour without anyone coming to remove their hoods. In the meantime, Matías gathered with his teammates and discussed what came next.

“Sosa and Galvan were the muscle. They would go in first and Matías would follow after they had a chance to do their interview. Each man would be in the interview room for no more than twenty minutes. Some would be waiting a long time to see Matías, while others would see him right away. The goal was to keep them off-balance, never sure when the next interviewer would enter the room, and they would keep this up until dawn.

“Matías found a straight-backed wooden chair and sat in the dingy hallway between interrogation rooms. The walls had not been painted for a long time and the floors were dirty enough that he would not want to touch them with his bare hands. He was impressed with the silence; even those prisoners who had been stirred awake were lying in the darkness hoping it was not their turn next and the others slept without any worry except what would be for breakfast in the morning.

“He could not even hear Sosa and Galvan at work. The doors were thick, the rooms soundproofed. It was just as well because Matías did not have the constitution to do what they did. In times like these, he was content to let experts do their work without interference.”

Matías, Cristina, and Flip. Three people slowly but inevitably being sucked into the violent vortex of drugs and gangs, murder and mayhem; a triangle of souls brought together by one common and callous enemy. By the end of the story, none of the three will escape unscathed. But which of them will survive—if any?

Authentically crafted and exquisitely written, Tequila Sunset is a sprawling novel imbued not only with violence, heat, and murder, but also sadness and humanity. Mr. Hawken’s words will keep you hooked until the very last sentence. One of the finest crime novels this year.