The Tenth Circle (The Blaine McCracken) 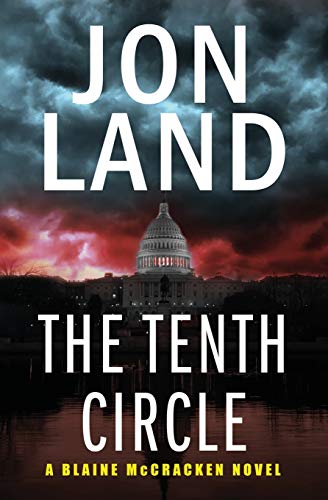 Black world troubleshooter Blaine McCracken is the Grim Reaper in human form. When he emerges from the shadows to reap a harvest among the corrupt and the wicked, the bodies will fall.

The Tenth Circle is McCracken’s second adventure since his long awaited return in Pandora’s Temple and, once again, he hits the ground running.

This time McCracken surfaces to take care of the Iranian nuclear threat, which he does with both flare and finality. His mastery gains him no respite, though. McCracken has barely finished cleaning up one mess before another emerges: an unprecedented series of terrorist attacks back in the States. Worse, one of the attacks may have claimed a boy who is the closest thing McCracken has to a grandson, making his usual cold detachment a pipe dream.

McCracken is brought in by Homeland Security to silence a misguided preacher, Jeremiah Rule, whose public antics are stirring up the wrath of Islamic fundamentalists. It seems a simple task, but Rule’s madness goes far beyond his hateful words and burned Korans. There is a greater threat hidden behind the preacher’s stage, and the coming finale will unleash an ancient evil that has lain dormant for more than 400 years.

Readers should have high expectations of a veteran bestseller like Jon Land, and his presentation in The Tenth Circle does not disappoint. Avid thriller readers who can anticipate every turn in most action novels will find a pleasant surprise here. In fact, they’ll find several. There are a number of unexpected twists and turns that will make them want to flip to the author’s photo and say, “You got me!” Of course, they will flip the page instead because the story does not let up.

Every moment of The Tenth Circle propels the story forward, even the scenes that look backward through the hero’s or the villain’s eyes. The plot ebbs and flows as heart-pounding action is woven in with age-old mysteries, high-tech weapons, and the blood of the fallen. Best of all, this tapestry is held together with threads of intelligent prose. For example:

“The man slid closer to him, took his hands out of his pockets as if about to comfort Blaine with a touch to his shoulder, but then just left them there dangling. ‘My advice? Don’t get involved.’”

This is just an excerpt of movement amid dialogue, but it shows some of the underlying genius that characterizes Mr. Land’s writing. This ability to recreate the telling details of human behavior amid bullets and body parts is rarely found on today’s overstocked thriller shelf.

Forget the mysteries, the action, and the great storyline. The simple genius in the small details alone makes The Tenth Circle one of this season’s must-have thrillers.