This Tender Land: A Novel 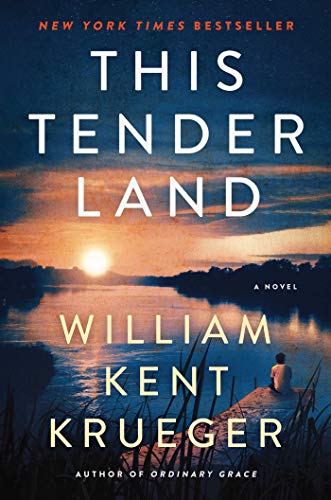 “a book you won't own. It will own you. Long, sprawling, and utterly captivating, readers will eat up every delicious word of it.”

It's 1932, a time of hardship, adversity, and despair. Especially at the Lincoln Indian Training School, formerly a military outpost called Fort Sibley. It's a place where Indian children who have been taken from their families are sent so they can be educated in the ways of the white world. But it's really a place meant to obliterate every trace of their Indianness, by force if necessary.

Odie O'Banion and his older brother Albert, orphans, are the only two white boys in the school. The opening pages describe their time in the school's quiet room, what used to be the military's solitary confinement cell.

The story is told by an aged Odie looking back from the viewpoint of his younger self:

"The night was moonless, the tiny cell as black as pitch, our bed a thin matting of straw laid on the dirt floor, the door a great rectangle of rusted iron with a slot at the bottom for the delivery of a food plate that never held more than one hard biscuit. I was scared to death. . . ."

In the morning, the boys are removed from the quiet room and sent to work on a local farm. It is grueling dirty work mucking out cattle yards, slopping hogs, detassling corn, cutting out jimson weed, all of it under an unrelenting sun. Haying was the absolute worst:

"You spent the whole day bucking those big bales, sweating bullets, covered in hay dust that made you itch like you were being chewed on a million fleas."

After years of such mistreatment, Vincent DiMarco meets a sudden demise at the hands of one of the children. Odie and Albert, along with a speechless Sioux Indian boy named Mose Washington, and six-year old Emmy Frost are forced to go on the run pursued by the police.

Thus their journey begins—harsh, perilous, frightening. They are confronted along the way by a dissimilitude of good and evil.

A farmer they call pig scarer:  ". . . The man was tall, awkwardly built, and held a shotgun in his hands. His face was like a diamond, a hard thing cut at sharp angles. He had a black patch over one eye. The other eye glared at us. . . .

". . . the man grabbed Emmy and pulled her away . . . Mose lurched toward her, trying to bring her back, but the man swung the barrel of his shotgun and caught Mose full across the left cheek, and he went down hard. . . ."

Pig scarer takes them to a room in the barn where they are held captive and forced to work the farm.

Hawk Flies at Night: "The man materialized out of the dark, big and powerful, shoulders like those of a buffalo, with hair like a buffalo's winter hide flowing over them . . . He stood at the edge of the firelight, a burlap bag slung over his shoulder, his eyes unreadable."

The runaways make his brief acquaintance, then come to fear that he will turn them in, so they wait for nightfall and creep away.

They encounter a traveling tent revival and Sister Eve: ". . . A woman held center stage. Her hair was a long, sleek tumble the color of fox fur, and she wore a flowing white robe whose long hem trailed behind her as she moved."

They're astounded to see Sister Eve perform a healing right before their eyes:

"And son of a gun, that crippled boy began to draw himself up. It was like watching a leaf unfurl. I could have sworn I heard the cracking of every vertebra as his spine straightened."

Later that night, they see something unexpected: "Sister Eve pulled a cigarette from a small, silver case, and the trumpet player lifted a lighter and offered her a flame. She blew a flourish of smoke . . . drew on the cigarette, then her lips formed a little O and she puffed out two perfect smoke rings . . ."

At a place where two rivers meet, the child fugitives come upon a shantytown, a community of temporary shelters assembled by the many poverty-stricken homeless, lost souls, and victims of the Depression who've had their lives disrupted. Farmers who had lost their farms:

". . . The little structures had been built of materials you might have found in a city dump—cardboard, sheet metal, corrugated siding, scrap lumber, wooden crates . . . lean-tos of driftwood covered with tarps. Here and there a tent had been pitched . . ."

They're welcomed and given food, but later are again forced to flee, chased by police with dogs.

This Tender Land is a heartfelt, true to life Depression-era story filled with courage, determination, and heroism. In a letter to readers, author William Kent Krueger talks about his own difficult journey while writing this book.

After the huge success of his first standalone novel, Ordinary Grace, he was asked for a companion novel. That's when he felt what many writers feel after a hugely successful book, especially after a first book—Oh, my god! Now people are going to expect me to do this again!

Here's how he tells it:

"The expectations for that companion novel were huge, crushing even. I spent nearly three years laboring over a story in which I tried to satisfy all those expectations. Unfortunately, the completed manuscript fell far short of what I'd hoped. In the end, I asked Atria not to publish the work. I'm thankful that they were understanding and were willing to give me another shot."

The result is This Tender Land, a book you won't own. It will own you. Long, sprawling, and utterly captivating, readers will eat up every delicious word of it.