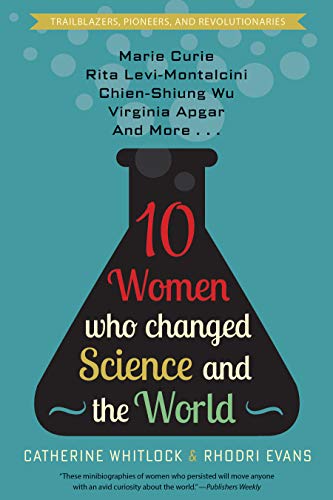 “Each of the lives portrayed here exemplify the importance of perseverance and a refusal to be constrained by social boundaries.”

Catherine Whitlock and Rhodri Evans promise a lot in the subtitle of this book, Trailblazers, Pioneers, and Revolutionaries. For the most part, the book delivers, with short biographies of impressive achievements against difficult odds. A common theme throughout all of these women's lives is the lack of access to education and employment simply by virtue of being a woman. Another thread that runs through these stories is the support of family, teachers, and colleagues, male allies who helped these woman make real differences. So while there is plenty of struggle, there is also crucial recognition, often when it matters most.

The first chapter, on Virginia Apgar, who developed the scale for assessing newborns' health immediately after birth (named, fittingly enough, after her) describes how “Medicine was very much a man's world, exemplified by the lack of housing for female doctors; in her six months in Madison she moved three times.”

Still, Apgar gets an education, jobs, appreciation, and recognition in her work in obstetrics and anesthesia. “Virginia was not only one of the most prominent female obstetricians in the United States, she was also the first female doctor to be elected to some key positions of influence and authority. For example, in 1941, at the age of thirty-two, she was made the treasure for the Board of the American Society of Anesthetists, serving in that role for four years.”

Other bios follow similar trajectories. Marie Curie is probably the best-known scientist included in the collection and her many successes, including a Nobel Prize, will not be news to most readers. What may be, however, is putting the prize into context, how new it was when she won it in 1903, having been started only in 1901.

Getrude Elion, on the other hand, may be one of the most obscure, “a pioneering chemist in the pharmaceutical industry, who received the 1988 Nobel Prize in Physiology and Medicine with George Hitchings . . . and James Black for their role in making a number of 'designer drugs.' Although she was the fifth woman to receive this Nobel Prize, she was the first who didn't have a PhD or a medical degree.” For Elion, being the rare woman in her school and in her field, wasn't an issue, more like something she took for granted and just got on with the work.

Dorothy Hodgkin, another Nobel Prize winner in chemistry, is typical in the kind of support she  got: “She was inspired by a teacher who understood the importance of practical demonstrations . . . Dorothy entertained herself and her sisters with the colorful, and often explosive, world of chemistry.” Once she was working as a chemist, men in her field recognized her talent and offered her research positions.

The same thing happened for Henrietta Leavitt, who discovered a way of ranking stars' magnitude more accurately. A Harvard professor not only offered her a position at the observatory, he paid her well for it, even more than the established norm, “in view of the quality of your work.”

The authors have chosen an interesting mix of women and provide a bibliography along with suggestions for additional reading. The main flaw in a book of academic rigor is the generous use of quotes without a single attribution. Where are the footnotes to direct the reader to the quoted sources? How can a reader follow up and learn more without this information? To make this even worse, the chosen quotes are fascinating and to find no direction for reading them in context is highly frustrating and instills concern about the how thorough research for each biography has been.

The chapter on Lise Meitner, for example, states that “historians are still arguing about why Germany never developed an atomic bomb during the Second World War” while in fact, several books lay out clearly Germany's choice to focus on long-range rockets over an impossible-sounding superbomb, from David Cassidy's Farm Hall and the German Atomic Project of World War II to Alan Beyerchen's Scientists Under Hitler: Politics and the Physics Community in the Third Reich to Sir Charles Frank's Operation Epsilon: the Farm Hall Transcripts.

Still, this is a book worth reading. Each of the lives portrayed here exemplify the importance of perseverance and a refusal to be constrained by social boundaries. These women all took themselves seriously—and now readers can do so as well.