Ten Days in a Mad-House 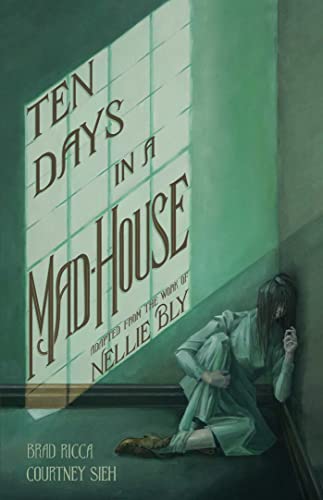 “[does] a superb job of transporting the reader back in time, evoking the era with telling details while staying true to the core of Nellie Bly’s story.”

It seems Nellie Bly is having a moment. An illustrated version of her original journalistic reports on her undercover stay at the Women’s Lunatic Asylum on Blackwell Island came out last January. A historical novel based on her life, focusing primarily on the ten days in the insane asylum, comes out in August from Louisa Treger. And in the meantime, this graphic novel offers the same riveting story in a compelling, accessible format.

Nellie Bly was a pioneering journalist of the late 19th, early 20th century focusing on exposés to right great social wrongs. Her first stories looked at women working in factories and the terrible conditions of the slums they lived in. Ten Days in a Mad-House opens with Bly’s move to New York City. In order to convince The World to hire her, she agrees to take on the dangerous undercover assignment. The graphic pages introduce us to Colonel John Cockerill, the editor who had long been looking for a way to get at the truth about Blackwell Island, but the attention stays squarely on Bly, who takes on the mission with her customary zeal.

It’s disturbingly easy for women to be labeled for as “crazy.” All they have to do is somehow not fit the norm society expects of them. Bly meets women locked up who have true mental illness, but many are sane until they get to the asylum where the dehumanizing treatment quickly drives young women into debilitating depression, paranoia, and despair. One woman is locked away simply because she’s German and nobody can understand what she’s saying.

It’s a horrific story and the graphic novel format allows the reader to see just how terrible it is, how sadistic the guards are, how uncaring most of the doctors are. But the art lightens the bleakness, all while depicting it accurately. Ricca and Sieh have done a superb job of transporting the reader back in time, evoking the era with telling details while staying true to the core of Nellie Bly’s story. It’s a tough read, but also a quick one in this accessible format. Much of the text is taken directly from Bly’s reporting, interspersed with language that fits the period.

The book ends on a positive note, a surge of relief after the unrelenting bleakness. Bly’s newspaper stories lead to a grand jury investigation of the asylum’s governance. Nobody in the administration is punished, but changes are made. Bly goes on to more journalistic scoops. She’s proven not only that the asylum was more prison than hospital, she’s shown that women can be tough reporters. That’s a big story in itself.