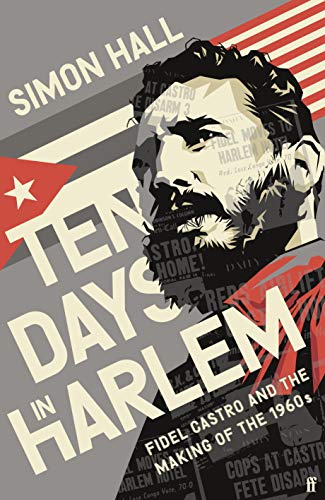 In a televised 1959 interview that didn’t prove quite the launchpad to longstanding popular adulation as recent appearances by Elvis Presley and the future stateside debut of the Beatles, a fawning Ed Sullivan professed to speak for all Americans when he told Cuban revolutionary leader Fidel Castro, “We want you to like us, and we like you.”

America’s relationship with Castro’s Cuba was never that simple, and never again would it prove quite as amicable, as Castro emerged as a crucial, if contentious Soviet ally in the Cold War and an icon of anti-colonial insurgency, and later morphed into a repressive if enduring totalitarian leader. But as the 1950s gave way to the 1960s, many Black activists and white leftists, recognizing the international dimensions of the struggle for civil rights as both a natural ally of post-colonial movements around the world and a humiliating liability for a nation intent on burnishing its credentials as the world’s leading democracy, turned to Castro’s Cuba for inspiration.

As British historian Simon Hall writes in 1956: The World in Revolt, “many African Americans, attracted by its unequivocal stance on behalf of racial equality, glimpsed in Castro’s revolution the possibilities for a new world.” Meanwhile, leftists disillusioned with the Soviet Union following the repudiation of Stalinism and Soviet suppression of nationalist uprisings in the Eastern bloc, found role models for a nascent New Left in Fidel Castro and his comrade in arms Che Guevara, right down to what Hall describes as their “beatnik-revolutionary aesthetic.” In his incandescent memoir, Ready for Revolution, Black Power and global Pan-African movement icon Kwame Ture (né Stokely Carmichael) writes, “During my youth, Castro was the most controversial—admired as well as demonized—political figure on the world stage. And clearly the boldest and most charismatic.”

Ture recalls Castro’s 1960 visit to New York to address the United Nations General Assembly as a defining and pivotal moment—not just for Black Americans who welcomed the Cuban delegation to Harlem after Castro and his entourage were essentially run out of a Manhattan hotel—but also in the shifting tectonics of the Cold War.

In Ten Days in Harlem: Fidel Castro and the Making of the 1960s, Simon Hall captures Castro’s action-packed September 1960 New York sojourn in rich and compelling detail, and argues persuasively that its repercussions echoed deeply in the decade to come, almost precisely as Ture remembered it. Ten Days in Harlem vividly recreates Castro’s frosty reception in Manhattan and his enthusiastic welcome at Harlem’s Theresa Hotel, where he enjoyed a warm and momentous encounter with Malcolm X. Their legendary tête-à-tête heightened Castro’s credibility with African American activists, and prefigured, in Hall’s telling, Malcolm X’s growing global political awareness, and his rejection of the apolitical insularity of the Nation of Islam and Elijah Muhammad.

Over the course of ten brisk and neatly delineated chapters, Hall describes each day of Castro’s visit, including his landmark (and lengthy) oration at the U.N. Hall draws into Castro’s orbit a broad array of key international figures ranging from the Soviet Union’s shoe-slamming premier Nikita Khrushchev to Ghana’s Kwame Nkrumah, Egypt’s Gamal Abdel Nasser, India’s Jawahrarlal Nehru, and—conspicuous in his golf-outing absence—U.S. president Dwight David Eisenhower. Castro would also cross paths with ascendant American leftists, artists and intellectuals like C. Wright Mills, Robert F. Williams, I. F. Stone, LeRoi Jones, and Allen Ginsberg. (Castro’s meetup with Ginsberg was every bit as funny and surreal as one might imagine.)

In particular, Hall characterizes Castro’s “public embrace” with Nikita Khrushchev outside the Hotel Theresa as the beginning of a honeymoon that began to sour only after what Castro perceived as the Soviets’ no-cojones retreat in the Cuban Missile Crisis of 1962.

Castro’s ten days in Harlem served to expose racial tensions in the “Jim Crow North” that Eisenhower and other Cold War image-makers were trying (and failing) to portray as confined to the former Confederacy. It also served to dramatize the evolving role of the United Nations in international politics, and the response of major world powers (embattled European colonizers among them) to the freedom struggles of 25 African nations (17 in 1960 alone) recently liberated from colonial control.

“Fidel’s sojourn in New York helped to place the Global South—including his own Latin America—at the very centre of the Cold War,” Hall writes, “while his new-found and very public closeness with Khrushchev, whom he met for the first time there, all but guaranteed a decisive and fateful rupture in US-Cuban relations. Meanwhile, his valorizing of black freedom fighters, celebration of ‘Third World’ revolutionaries and association with ‘radical chic’ offered an early glimpse of the cultural politics—the fêting of Black Power activists, open support for the Viet Cong and an instinctive condemnation of American ‘empire’--that would soon become de rigueur for a generation of young leftists across the United States and Western Europe. Although no one knew it at a time, then, this brief trip proved to be both a turning point in the history of the Cold War and a foundational moment in the creation of what we think of as ‘the Sixties.’”

Ten Days in Harlem is neither Hall’s first book to discuss Castro or anti-colonial liberation movements, nor his first to tackle the evolution and dynamics of the American Freedom Movement and the New Left. Peace and Freedom: The Civil Rights and Antiwar Movements of the 1960s (2011) provides fresh and fascinating insight into these parallel movements, and a plausible working theory on the pitfalls of “multi-issuism” as a diluting influence on a sharply focused struggle, and a barrier to building broader multiracial coalitions.

One might regard Ten Days in Harlem as a sequel of sorts to the aforementioned 1956, which recounts revolutionary movements and other consequential breaks with the past around the world in that decisive year. Hall chronicles uprisings against Soviet control in Poznan and Budapest amid the fallout from Khrushchev’s stunningly anti-Stalinist Secret Speech, as contemporaneous (and mutually aware) Black freedom struggles in Alabama and South Africa, and Egypt’s battle against colonial powers for national control of the Suez Canal.

1956 colors a bit outside the lines with regard to Castro, acknowledging his movement’s inauspicious beginnings in December 1956 before recounting the revolutionaries’ eventual success in toppling the U.S.-backed Batista regime in early 1959, and culminating in Castro’s “rapturous reception” in Harlem in September 1960.

In Ten Days in Harlem, Hall cites a contemporaneous New Yorker article that characterizes Fidel Castro’s rollercoaster week-and-a-half in Manhattan as a story that “no sensible playwright would dare to compose,” and one that “even the most dogged critic would have a hard time recapitulating.” Perhaps its proper telling was a task best left to an accomplished historian of the next century—a feat deftly accomplished in Hall’s capable hands.