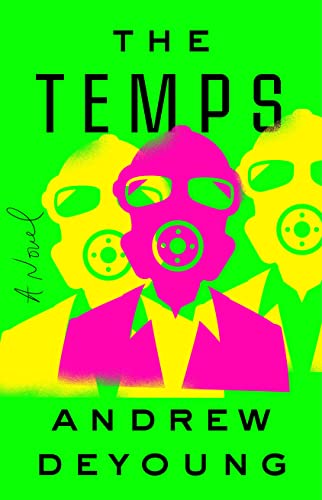 “DeYoung has taken a familiar end-of-the-world-as-we-know-it theme and made it something uniquely his own.”

The Temps is like an assorted box of See's candy, one that offers a variety of filled chocolates to satisfy diversified sweet tooth preferences—milk chocolate, dark chocolate, maple walnut, coconut, vanilla cream. So, too, with The Temps, a book that has been described as literary, comedic, sci fi, and apocalyptic. Add in a touch of horror and this book satisfies just about everyone's reading pleasure.

Three years after college graduation Jacob Elliott is on his way to begin a new job with Delphi Enterprises, a job he isn't looking forward to. Instead of the greatness he'd expected as an inexperienced over-educated English major, his post college employment has been a series of low-paying, no-paying jobs: barista, intern, assistant something or other.

This new job is not much better. He's a temp in a company housed in a sprawling concrete and glass office complex. He'd been trying for employment higher up the job ladder than a corporate mail room clerk in a company whose business he doesn't understand, but at least it pays.

He arrives to find that CEO Tristan Brandt has called a company-wide meeting on the outdoor concourse of the building for all employees. All except the temps, that is.

Jacob pushes a mail cart through a patchwork of hallways and doors delivering mail to the appropriate departments all the while watching through tall windows the employees gathered in the courtyard for the meeting. Tristan Brandt has just finished speaking when a poisonous yellow mist descends engulfing everyone outside.

The mist grows thicker until Jacob can barely see what's going on. But he can hear through the glass.

"There came the sound of moaning. Moans of pain, voiced by thousands of people at once, loud in Jacob's ears even though the sound was muffled by the thick glass.

"And then, through the murk, there came an object: a body hurling toward the glass, thumping against it.  A woman . . . There was a gagging sound from deep within her throat, . . . All over her body, blood vessels rose to visibility and burst, webbing her skin with a lattice of red.

"Her muscles loosened, but she didn't go limp, didn't fall to the ground, didn't die. . . . She bared her teeth and snarled, wolf-life, foamy spittle flying from her mouth and spattering the window . . .  as far as he could see was complete chaos.

"Fighting and death and blood as thick as a medieval battlefield. Blood running down the steps, bodies piled into mounds. . . . Everywhere he looked, the employees of Delphi Enterprises—so well-behaved, so reverent before the mist had descended—were transformed into rage-monsters . . ."

This breathless description of the effects of the strange yellow mist goes on at length. Jacob finds himself in the sealed building, safe for the moment, but alone. The TVs are still working, as new anchors, before succumbing to the yellow mist, report that the fury and madness are widespread.

And the tension doesn't let up for the rest of the book.

Jacob discovers that since temps had not been invited to the meeting, there are others alive in the building and he connects with some of them.

There's former psych major Lauren still reeling from an academic disappointment, the death of her father and the exposure of his secret life. She left academia and took a temp job at Delphi Enterprises. While there she discovered that Delphi was harvesting personal data.

Jacob and Lauren encounter another survivor, Swati, a part time contract yoga instructor in line for a permanent position. Good-hearted and strong willed, Swati had recently left a cheating boyfriend and a houseful of roommates who turned out to be political activists planning a cultural revolution.

Swati along with Jacob and Lauren find Dominic Hill, a student and former fast-food worker cooking up some burritos in the company employee kitchen.

". . . he'd gotten used to Delphi's secretiveness, its opacity. In his six months temping for business analytics he hadn't met a single person who had the whole picture of what the company did. . . . Temp or permanent, most people could tell you what they did for Delphi, but few could explain the purpose of their job. . . ."

Dominic is a temporary research assistant so has access to a lot of company data, but even he doesn't know exactly what Delphi does.

But he does know one thing for sure. He does not want to own or work in his uncle's roofing business any longer than he has to. He hates the work, hates working on rich people's houses. He has aspirations of reaching the corporate elite, but not just any corporate elite. He's aiming for Delphi Enterprises corporate elite.

He wants to be like CEO Tristan Brandt and live in and own one of those houses himself, which is why he began taking night classes in business administration.

The Temps is fast moving and believable. Every character the reader meets is unique and compelling with a convincing and fully fleshed out backstory. Author DeYoung's masterful character development is superb making it easy to forgive his occasional POV blending. (Really, it's hardly noticeable.) DeYoung has taken a familiar end-of-the-world-as-we-know-it theme and made it something uniquely his own. Readers won't soon forget it, and they'll be especially impressed with the Safe-T-Knife plot line.

Just a side note: This author, as many authors do today, took the risky step of finding a way to insert a subtle (or not so subtle) hint of his political ideology into the story. Perhaps he thought it would go unnoticed if he put it into an insignificant and irrelevant dialogue exchange about good and decent businesspeople making the world a better place.

A character replies: "Yeah, and I'm sure there were a lot of good Nazis, too."

To which another character responds: "That's not a fair comparison, you can't just drop Nazis into the conversation as a trump card."

See what he did there?