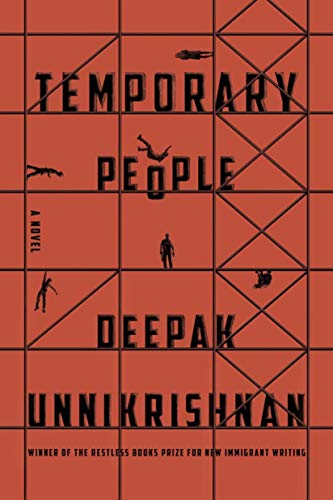 Few are aware of the trials faced by foreign nationals who live in the United Arab Emirates, also known as the Gulf States. News reports from the region focus more on the locals and their kings. Only rarely does the western media discuss the challenges faced by the largest percentage of the Gulf populations: foreigners who are imported much like any other product, to serve as the working class.

Unnikrishnan’s debut Temporary People, winner of the Restless Books Prize for New Immigrant Writing, takes a hard look at this group of people, treating them through his words much like the products they truly are. They are brought in from third world countries, given tasks to complete, then sent back home spent and useless. There is no hope of gaining citizenship, and through appearance, language, and culture, they stand out as different from the real citizens of the Gulf States.

The book is not a factual one: there is much that borders the supernatural and much that borders sci-fi. Yet the stories are all entrenched in a strange sort of reality, so that even when reading of strange things such as a woman who glues broken bodies of workers who fall from the tops of buildings, or an elevator that traps and molests children, one cannot but feel as if those too, are very real. The reason, of course, is the style of writing, the mixture of contemporary settings with a hint of fantasy, and the raw characters who seem very much human even if they are grown in the lab with a shelf life of only 12 years.

The real question, however, is if readers will truly gain an understanding of the “Temporary People” who live in the U.A.E. by reading this book? The answer is yes, if they are willing to look past the unreal and catch a glimpse of the real.

For instance, in the story “Birds” a woman cycles from one place to another, trying to stick together with glue and tape construction workers who have fallen from the buildings they are working on. On the face of it the story is a fantastical, perhaps weird one, because the resources available to this woman are hardly the stuff of reality. But the plight of the workers, who are seen as dispensable, as they give everything including sometimes their lives for their employers, is very much a true picture of the reality on the ground. During her work she hears of a man who puts himself into four accidents a year to break his body in such a way that his employer would be forced to provide for his family when he ultimately dies.

Other stories are no less poignant. “Akbaar: Exodus” tells of a government decision to expel all foreign workers on a certain date, and how various families and companies deal with this unwelcome news.

In “Moonsepalty” a group of immigrant boys play cricket on the streets, ever harassed by Arabs who consider them lesser, worthless. There is satire to satisfy all sorts of readers, as there is an abundance of lyrical language to sooth the heart. In all, the stories tell of the uncaring nature of corporate and government entities, the frailty of human nature, and the resilience of the human spirit.

Perhaps the most striking story “Pravasis” is not a story in the traditional sense, but an extensive listing of professions that people hold in the Gulf States. It ends with a message that’s beautifully haunting and somehow hopeless.