Teardown: Memoir of a Vanishing City 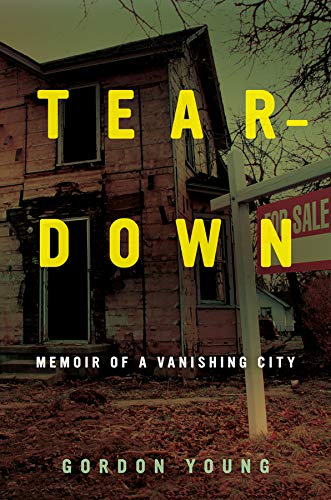 Flint, Michigan. Butt of jokes; often with the highest murder rate per capita in the country; once a place of rational and then irrational optimism; source of a fleeing diaspora; home to both amazing resilience and dysfunction.

Gordon Young’s memoir, Teardown, is a bittersweet read for anyone who has lived in Flint—the birthplace of General Motors—and let it get under their skin.

Author Young refers to its denizens as “Flintoids.” The term “Flintstone” is also in wide use. Yes, people in Flint have a sense of humor, albeit darker than expected.

I lived in Flint from 1992–1995 in what now seems like halcyon days compared to what’s happening there today. I arrived at University of Michigan-Flint having only seen Michael Moore’s acid critique of GM’s corporate responsibility to the community in Roger & Me.

I shrugged it off and mustered up my Midwestern roots, figuring it would be a sort of homecoming after having lived elsewhere most of my life, much like Young. Homecoming it was not as I was introduced to the hardscrabble, working class town with all the trappings that the rustbelt can offer. We used to joke that Flint had as many churches as bars, often next to one another—an ironic balancing act between cosmic salvation and earthly despair.

Mr. Young adopts the homecoming genre to drive his excellent meditation on a town and its people who find themselves on America’s economic margins of corporate-industrial abandon.

The lens for Young’s story of urban decline and decay is told through the romancing and agony of buying a house in Flint after years of living in overinflated, ultra-hip San Francisco.

Flint’s auto boom ended in the 1970s, felled by a mix of better, cheaper foreign competition coupled with political protection that rendered GM fatally less competitive in the long run.

In its glory days, GM founder Charles Stewart Mott envisioned Flint as a model worker’s paradise complete with golf courses, performance art auditoriums, a planetarium, a music conservatory, and the list goes on. Karl Marx would have been proud. The Flint Institute of Arts is the second largest in the state, and one can still play tennis on the Kellar Park clay courts built in 1922.

A powerful union and economic machine formed a heady brew of economic optimism as big as the fins on a late 1950’s Cadillac, along with the nation’s largest and most powerful working-class bourgeoisie.

As Mr. Young makes clear, economic platforms come and go, and Flint’s is now on the detritus heap of economic transformation into a new and harshly competitive neoliberal era of government downsizing and ruthlessly competitive free trade, along with an erosion of labor power as unions dwindle in strength and number.

We tend to use sanitizing language when talking about economic transformation and its effects: “downsizing,” “deindustrialization,” and “post-industrial” come to mind.

To say that Flint has downsized since its economic peak in the late 1960s, is like saying that places like Greece, Italy, Portugal, and Spain are having a momentary economic contraction.

Mr. Young’s approach to understanding the unraveling of a once prosperous city is through the “homecoming” genre combined with a shrewd eye of a journalist with some social science chops. He digs into Flint’s economic and racial history with precision, and captures its contemporary collapse in a manner that is clearly personal but constantly brought back from temptations to romance by a need to broadly, urgently understand and explain place and people who live with “shrinking city syndrome.”

Along the way, we meet a number of residents, many of whom refuse to give up on a place where political and economic handwriting was on the wall in the early to mid-1990s. The North American Free Trade Agreement was on its way to implementation, and the one-economy town of Flint had no backup plan.

There was an old New Yorker cartoon with an autoworker standing at a cantina pay phone in a stereotypical Mexican desert-scape playing on former billionaire presidential candidate flop Ross Perot’s famous tag line: “I don’t know what the hell happened—one minute I’m at work in Flint, Michigan, then there’s a giant sucking sound and suddenly here I am in Mexico.”

Fast forward to the present. Since its peak in the late 1960s, Flint has lost 30–40% of its job base, and its schools have lost a shocking 78% of its children, as Mr. Young notes. Additionally, the official unemployment rate hovers around 11%, but is undoubtedly much higher. It’s useful to recall, however, that the town has, ironically, always had a chronically high unemployment rate even when it was booming.

Two things fueled widespread joblessness. First, Flint attracted tremendous amounts of labor with the promise of high-paying autoworker jobs, much like the lure of the sunbelt today. But folks got there and found that those jobs weren’t always easy to land and along the way got stuck.

As Ben Hamper outlines in his devastating critique framed as shop-rat memoir, Riventhead, GM figured out how to hustle the State of Michigan for unemployment when the plants cyclically contracted their labor force only to rehire later when things picked up in the market. The State of Michigan effectively subsidized GM’s reserve labor force that waited in the wings for renewed expansion.

Of course, today, that labor force is in permanent contraction in a city where once proud, if often humble, neighborhoods have been abandoned to looters, drug dealers, pyromaniacs, and sex workers. Neighborhoods have vast areas that have been bulldozed to reduce all manner of hazard and blight. It is a city that is going back to the land. Not by choice. It is also a city plagued by debt so crushing that it went into state receivership, former car plants are now some of the nation’s most massive brownfields, and social violence is spiraling out of control.

Pretty depressing. Mr. Young skillfully gives a face and a voice to this painful and difficult reality. He operates like an urban anthropologist curious about this place, its people, what makes them tick, and most importantly why they still care.

Let’s take but two examples: P-Nut and Dave—lifetime residents at divergent ends of their lives. Dave is a former autoworker and long-time resident of a working-class neighborhood. P-Nut has had his troubles, owns practically nothing, but wants to carve out a life. Gun-toting Dave embraces the diversity of the neighborhood and won’t be chased away by gangbangers or drug dealers. P-Nut wants a stake for his young family against the odds.

Seeing no path to buy his imagined homecoming in the material form of a house, Young decides to invest in direct development: P-Nut’s salvaged house. It’s a plot twist that keeps the dream alive through the fate of others with a stronger and more desperate need. We are left hoping it pays off in a world where good outcomes are in spare number.

As a hometown boy, Mr. Young was deeply affected by Flint, and he found the impact hard to shake—identity, romance, and sorrow form a dynamic and volatile emotional mix. As a short-time resident, it got me, too. Less deeply, but it got me. As I read the book, familiar people and places leapt out. I only hope that Mayor Dayne Walling doesn’t burn out in his attempt to wrangle an unmanageable budget, and Dan Kildee’s vision of reinventing a shrinking city isn’t lost in a sea of internal dissention and squabble that so commonly lead to inertia and further decline.