Tear It Down (A Peter Ash Novel) 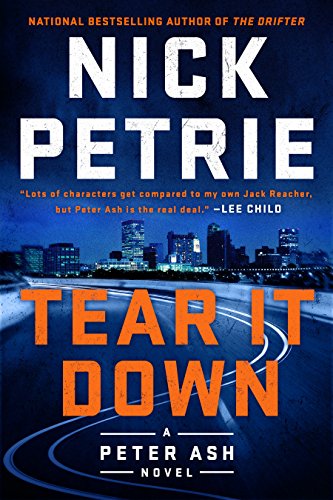 “Tear It Down is a bit of a let-down. The story’s messy and implausible, . . . At the end of the day, Nick Petrie’s writing is too derivative and ingratiating for its own good.”

Everyone loves a comparable. For example, comps are used in real estate to assess the value of a property as compared to others of similar size, location, or age. They’re also used to compare college football players entering the NFL draft to current or former players. Is Leighton Vander Esch really the second coming of Brian Urlacher? Or Josh Allen the next Ben Roethlisberger?

Comparables are also used in publishing to sell a manuscript to publishers or to market a new title to readers. A horror novel might be comped as the next best thing to Stephen King, or a detective novel to the work of Raymond Chandler or John D. MacDonald. And when we’re talking about thrillers, these days it’s all about Lee Child and his intrepid hero, Jack Reacher.

Which brings us to Tear It Down, the fourth thriller in the Peter Ash series by Nick Petrie. Here we have the continuing story of a Marine Corps veteran and survivor of multiple deployments in Afghanistan and Iraq who travels around the United States butting into the business of friends and strangers alike.

Struggling to come to grips with post-traumatic stress disorder, Ash is persuaded by his love interest, the hard-assed and foul-mouthed June Cassidy, to drive his beloved green 1968 Chevrolet pickup truck to Memphis to help June’s friend, Wanda Wyatt. They’re not sure of the exact nature of Wanda’s problem, but when Ash arrives to find that someone has driven a Mack truck into Wanda’s living room, he realizes that her problem’s a little more serious than he might have originally thought.

Now, as a reader, understand, you’re being asked to spend your money on what’s being marketed as the second coming of Lee Child. Multiple quoted sources comp Peter Ash to Jack Reacher, and Child himself has chipped in with a great promotional line for Tear It Down. But can you trust them? If you love Reacher, will you love Ash?

If you’re going to make your decision based on Tear It Down, you might want to invest your precious funds elsewhere.

Ash is former military, he has multiple scars on his body that the ladies like to finger in intimate moments, and he prefers to work outside the law. So much for the similarities.

In contrast, while Reacher’s a lone wolf who loves to take trouble into his own hands and crush it into dust, Ash works with a support system. June Cassidy joins him in Memphis to babysit Wanda while Ash roves around trying to figure things out. When a local drug gang crashes the party, Ash enlists the help of his old friend and former partner Lewis, an accomplished criminal in his own right (comp alert—you’re supposed to think of Spenser and Hawk here, folks).

The story follows two tangled threads, one that contains the solution to Wanda’s Mack truck problem and the other that simply complicates things.

The latter begins when a black kid on the run from a jewelry store heist jacks Ash’s truck at a gas station shortly after his arrival in Memphis. Seems the store is a money laundering front for the aforementioned drug gang, and the kid, Eli Bell, is now being hunted by the bad guy, King Robbie.

The former thread, in which a couple of wacko hillbilly brothers conduct an over-the-top campaign to drive Wanda from her house, is excessive and unbelievable. We can see Petrie straining here to work a Lee Child-like thriller experience with heavy artillery and lunatics with mayhem in mind, but it’s just too loopy to succeed.

Furthermore, the chase scene where Ash and the loony toons leave a trail of bodies behind them—nine dead, three critical, and more than 40 injured—is waved off by throwing the blame onto King Robbie, who had nothing to do with it. Ash is upset by the body count, but not upset enough to accept responsibility. While readers always know and understand Reacher’s moral center, such as it is, Ash’s appears to vacillate all over the place.

Petrie has an ability to tease readers with eye-catching secondary characters, however. He deserves credit for the creation of Eli Bell, a guitar-playing blues prodigy who captures Ash’s protective nature along with his truck. Petrie also does fairly well with Wanda Wyatt, a photo journalist and war correspondent with her own case of PTSD. And Eli’s girlfriend, Nadine? Whoa. Spooky and intriguing. Would have loved to have seen more done with her.

Overall, however, Tear It Down is a bit of a let-down. The story’s messy and implausible, the back-and-forth between Ash and June Cassidy is overdone and repetitive to the point of nausea, and the Spenser-and-Hawk thing between Ash and Lewis, along with the overall half-baked comp to Jack Reacher, fail to convince.

At the end of the day, Nick Petrie’s writing is too derivative and ingratiating for its own good.