The Teacher of Warsaw 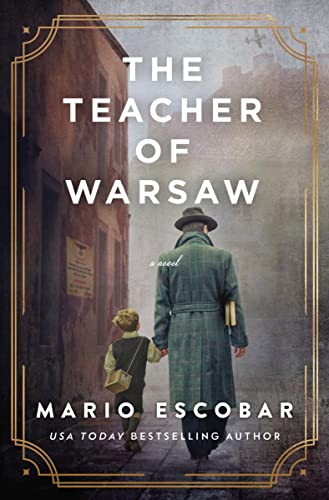 “An important, sensitive look at the triumph of the human spirit over evil, The Teacher of Warsaw is based on a true story and epitomizes the very best of poignant historical fiction.”

A nostalgic tone sets the stage of Mario Escobar’s The Teacher of Warsaw. In the prologue, an editor is in receipt of a hidden diary now typed as a manuscript from a woman named Agnieszka Ignaciuk, who survived the WWII, German occupation of Warsaw, Poland. The editor says, “That small, lovely woman with the wise eagle eyes placed into my hands Janusz Korczak’s typed manuscript. She acted like she was passing along a forbidden fruit that would eternally expel me from the semblance of paradise my life had recently become.” Taking the manuscript, the editor reflects upon its author, “I remembered the Teacher. Everyone I know called him the Old Doctor . . . I heard his voice. . . . It was just he and I in the middle of a ruined world.”

It is September 1939, and 60-year-old Janusz Korczak is the director of Dom Sierot, a Warsaw home for 200 orphaned children. He’s a man of deep integrity, a beloved and devoted teacher who views his job as a calling and structures the home with no differentiation based on age or rank, where tutors and students equally cohabitate as a family. When one of the orphans asks why he’d never had his own children, the unmarried Dr. Korczak reveals what he has told few others. “The truth is, my father went insane, and I’ve always been afraid that the same thing will happen to me. I thought that if I had children, they might inherit that disease.” It is this reason that makes Korczak all the more committed to the children.

Dom Sierot’s building, which houses Jewish orphans, has been in a Christian neighborhood for 27 years. Korczak shares, “We were there on purpose so that Jewish and Christian children could live together. Long ago I had learned that the only way to knock down the walls of prejudice and hatred toward difference was coexisting and building friendship that allowed the children to fight and the be reconciled again.”

It is November of 1940, and a shock to Korcsak’s system comes when the Germans relocate Dom Sierot from the working-class neighborhood outside the city to a squalid area in Warsaw’s walled Jewish ghetto, consisting of “400,000 within an area no larger than 1.3 miles.” In preparing for the change, the sensitive Korczak softens the blow to the children, “We’ll probably long to be back here in our wonderful house. But the walls that you see around us are not our real home. The real refuge of each one of us is inside our hearts. As long as we’re together, we will keep being happy and belonging to our big family.” When one little boy cries at the sight of the new living quarters, Korczak hands him the treasure map he’d prepared the night before, and says, “Treasure hunts always occur in exotic, remote places. No one’s ever done anything amazing without leaving home first.”

As winter wears upon the ghetto, living conditions become more desperate in the orphanage’s unheated, dilapidated home, where water is scarce in the midst of a food shortage, leaving Korczak to solicit and rely upon the help of charitable donors. When the Gestapo confiscates a cart of food and supplies belonging to the orphanage, Korczak bravely holds his ground and says to the German officer, “This food is for the children and under no circumstances can I allow you to take it from them.” When told to take his complaint to the Gestapo headquarters, the optimistic Korczak goes to plead his case at the German administration offices, only to be thrown in jail for not being in compliance with wearing the requisite Star of David on his arm, intended to signify those who are Jewish.

Upon being unceremoniously grabbed by a German soldier and transported to jail, Korczak says, “For them, life was a useless sketch through which to imprint their senseless brutality and show the world that they were the bosses. For me, life was a perfect beautifully framed painting full of meaning and hope. For them, life was prosaic and frivolous, ever so light, whereas for me it was so heavy I could hardly take a step without feeling the mud stuck to my feet.”

A year on since the Nazis came to Poland, nothing improves in the ghetto. Korczak writes, “Typhus had run its course around the city in recent months, given the deplorable hygienic conditions and insufficient nutrition of the population. It seemed the Germans preferred to kill us off slowly. Their program was designed to weaken our spirits and erode our morale.” Korczak, in the habit of calling assembly whenever a new problem arises, and always serving as inspirational motivator, poses the question to the orphans, “What does it mean to be happy?” “Life in and of itself is an act of happiness . . . Happiness is not about things. We look for it outside of ourselves, but it’s something that’s in our own minds. The work of our hearts is to give pure love.”

As time wears on and conditions worsen, Korczak delivers a speech intended to inspire the orphanages’ dispirited teachers and caretakers. “We sleep and dream of better days but wake to find ourselves here. Yet here, where we serve, we are doing all we can to make better days for the children. We’re in this world to serve one another, to give our very last breaths for our neighbors.”

With a supporting cast of characters in various official positions who are incrementally ready to help Dr. Korczak escape the ill-fated ghetto, the doctor refuses each offer. “Leave me be,” he says to a sympathetic German captain who knows things are nearing an end. “I will go with my children and will not leave them alone.”

In hindsight, after the worst has happened, trusted companion and co-worker of Korczak’s, Agnieszka Ignaciuk—the deliverer of  Korczak’s left behind diary chronicling the personal tragedies of war—remembers the good doctor and says, “Janusz Korczak had lit up a country swathed in darkness. All of Poland had to know his story and admire his example. I vowed to make that happen.”

In The Teacher of Warsaw, Escobar’s intimate, first-person delivery is flawlessly researched. Its historic timeline unfurls with heightening drama from the vantage point of one selfless man dedicated to the wellbeing of Polish children in harrowing wartime conditions against all odds and costs. It’s a sobering, memorable story taking the reader through tragic events in occupied Warsaw, from September 1939 to May of 1943. An important, sensitive look at the triumph of the human spirit over evil, The Teacher of Warsaw is based on a true story and epitomizes the very best of poignant historical fiction.