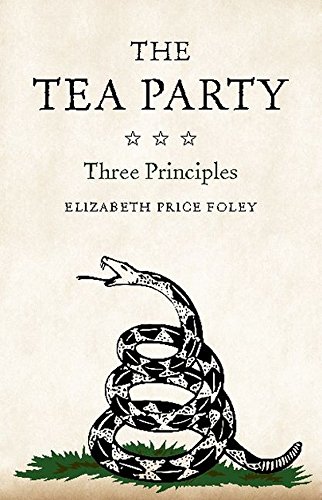 “Those who share Dr. Foley’s ‘admiration and respect for the movement’ will find this book invigorating. Those who do not but who wish to understand the three major principles of the movement—Limited Government, U.S. Sovereignty, and Constitutional Originalism—will find it quite informative nonetheless.”

The iconic “Don’t Tread on Me” coiled rattlesnake graces the cover and the title is plain and simple: The Tea Party: Three Principles. The publisher is highly honored for its scholarly and general public books. And author Elizabeth Price Foley is a professor of law at a well regarded university, holding a chair at the Institute of Justice, and is a self-described “libertarian public interest law firm.”

Dr. Foley provides the reader with a promise in the Preface:

“It is important to understand what this book is not about. It’s not a book about policy or politics . . . I teach constitutional law, so this book has tried to maintain a laser-beam focus on the constitutional principles I see as unifying the Tea Party movement.”

This promise, unfortunately, is not kept, as evidenced by the political focus, by the failure to correct factual inaccuracies, and the TPM/Libertarian philosophical positions clearly taken by Dr. Foley.

This does not mean that the The Tea Party does not have dedicated audiences. Those who share Dr. Foley’s “admiration and respect for the movement” will find this book invigorating. Those who do not but who wish to understand the three major principles of the movement—Limited Government, U.S. Sovereignty, and Constitutional Originalism—will find it quite informative.

The chapters concerning the Three Principles are well developed and provide an accurate understanding of the movement itself. But The Tea Party does meet its initial goal: “to focus on the Tea Party from a perspective that focuses exclusively on these (the three principles) constitutional issues.”

This review will only refer to three issues found in the chapter Limited Government, only to maintain what this reviewer hopes to be an honest, non-political review.

In defining the “principles” of the TPM, the Libertarian ideal of limited government and a free market with little or no regulation is well defined, along with the general arguments that coincide with the overriding philosophy of the TPM. This includes the elimination of organizations and departments that the TPM believe are not supported by the Constitution, most notably the Federal Reserve Banks and “Obamacare.” It is here is where the reader must sift through the political philosophy of the author.

Paul, in his 2008 campaign rhetoric, stated on his website: “the Federal Reserve, an unelected group of private bankers, is printing trillions of dollars to bail out private industries, purchase government debt and flood the market with cheap credit.”

Those knowledgeable with the Federal Reserve System understand that it is the Department of Treasury that prints the money not the Federal Reserve, and that is was by the presidential decrees from George W. Bush and Barak Obama that led to the “bail outs.”

In addition, though the seven-members of the Board of Governors for the Fed are not elected officials, they are “nominated by the President of the United States and confirmed by the U.S. Senate.”

A second example is Dr. Foley’s continued use of partisan TPM, Republican Party, and Libertarian titles when describing legislation with which they firmly disagree. The law passed by the then Democratic lead Congress is called the “Patient Protection and Affordable Care Act,” not the politically charged “Obamacare.” In addition, Dr. Foley fails to provide the TPM oppositions’ positions, with or without rebuttal, which fails to meet the basic criteria for a fair and honest discussion.

These practices continue throughout the text, failing to provide the promise that it is “not a book about policy or politics.”

Yet the TPM’s arguments concerning American exceptionalism, overregulation, and the principle of Constitutional Originalism make this a “must” read for those on both sides of this discussion.

Is this a recommendation to purchase The Tea Party? Absolutely.

For those who agree with the TPM’s political principles, The Tea Party will read as an honest and reasonable depiction of the movement, a reinforcement of the ideals of individual and states’ rights, government grown too large and intrusive, and devout patriotism.

For opponents who disagree with the TPM’s political philosophies (as does this reviewer), The Tea Party: Three Principles becomes a quagmire of political mud. For them a lesson from Sun Tzu’s The Art of War come into play: “Know your enemy as well as you know yourself and you will never fear 1,000 battles.”