Taxi: Journey Through My Windows 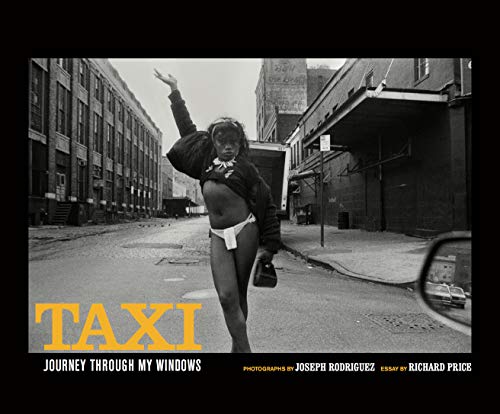 For eleven years, Frank O'Hara worked a day job at the Museum of Modern Arts, writing poems during his lunch break.

Jackson Pollock was a janitor and painted a little on the side.

Pollock became one of the most celebrated painters the world has ever known. O’Hara’s noontime scribblings, quick observations of the bustling world around him, became Lunch Poems, one of the most seminal books of poetry ever created.  “It’s my lunch hour,” wrote O’Hara, ‘so I go/for a walk among the hum-colored/cabs.”

So, yes, two decades later Joseph Rodriguez drove one of those cabs, hum-colored and buzzing around the yawning metropolis of a wild New York City which has long since departed but now seems eager to return.  He brought his camera along.

Rodriguez would later arrive as one of the more lauded photographers of our time, winning most every fellowship there is in a career as a documentarian that has swept across nearly four decades.  The photographs in Taxi: Journey Through My Windows 1977-1987 are not the photographs of that Joseph Rodriguez, but rather an earlier, embryonic form of the storyteller he would one day become.

The setting is the story, and the photographs—lively and observant—relay the photographer’s shock at the grizzled New York around him.  But they are also—as Rodriguez freely admits in his adjoining text—the work of a person not yet at ease with the role of the photographer in the photograph: the need to get closer, the need to observe through intervention. He points to a workshop he took with Mary-Ellen Mark during this period, in which she told him he needed to get closer to his subjects: those who also knew Mary-Ellen might suspect she did not deliver this advice gently. Those who know his later work know that, eventually, he took that advice to heart.

Anyone who’s ever taught a photography workshop can tell you that half the job is overcoming the natural timidity of a young photographer; most humans are non-confrontational, whether with their own lives or those around them. This holds true here, as well, in photographs that are distant and often detached, modest and direct, but clearly fearful. The world of 1970s and ’80s New York would be unrecognizable to someone who rolled into the Port Authority for the first time today, but it seems just as unfamiliar to the contemporary Rodriguez, viewing the world through a rolled taxi window from across the avenue.

There are ups and downs in that distance, especially for the viewer sharing the shock with the camera-carrying hackman: nose pressed to the page to decipher each negative’s grainy scene, the reader is forced to awkwardly ogle the public masturbator whose ugly orgasm came to completion 40 years ago but who, thanks to Rodriguez, pleases himself permanently on celluloid. The same reader, however, does not get any intimacy with any of the more pleasant fauna of the urban safari that the photographer is guiding: happy families and long-gone faces that call for attention, admiration, and joy but who the photographer, at that early stage, recorded from afar before driving on into the fog of memory.

The Joseph Rodriguez of then does not rival the Joseph Rodriguez of now though this portfolio, while flawed, has merit—good buildings are built on good foundations, and Rodriguez, who has long taught at the International Center of Photography, does a professorial job of reminding the reader that these two photographers are not twins of the identical sort. Good for him for doing so; it’s important to know that we are always growing and improving, and it leaves room for one to see in this work what pervades all his others: the curiosity, the understanding and conversation with the world around him, never judgmental but always inquisitive. We can see here the sapling of what Rodriguez would later become and, while the work is budding at best, we can remember that it’s the beginning of something, and that all great things begin humbly. Just as we can be thankful that O’Hara did not have to end an assistant, or that Pollock could put away his mop, we can show gratitude that Joseph Rodriguez no longer journeys through his windows, but his lens.