Tattoos & Tequila: To Hell and Back with One of Rock's Most Notorious Frontmen 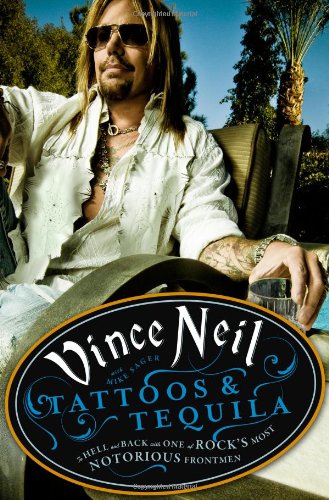 As words for this review materialize upon the screen, Mötley Crüe’s Greatest Hits’ crunches and screams in the background, raucous and direct in the commutation from auditory to written form. Vince Neil’s memoir Tattoos & Tequila: To Hell and Back with One of Rock’s Most Notorious Frontmen is, in some respects, reflective of that spirit, although pallid by comparison to its genesis.

You’re thinking “Here’s another review written by a fan of the band—how valid could it be?” Perish the thought.

Right up front: This memoir will likely be embraced and enjoyed only by readers who were christened in the pop music progression from punk to “hair” metal of the 80s. Full disclosure here—this reviewer was one of them. However, I was never a Crüe fan; never bought an album of theirs, never saw them at a festival, nor owned a T-shirt with the Crüe logo. I was more of a Styx, Boston, Eagles, or Journey kind of person. Fact is though, you couldn’t grow up in that decade without at least knowing of them, much less hearing their songs or seeing their videos splayed all over MTV. Having been so baptized, I am fully cognizant of the Crüe and their impact and influence upon rock. Some of their songs are downright anthemic, but this book struggles to live up to the music.

So let us begin there. This memoir, as the title implies, is about Vince Neil, about his life. But Neil’s name is synonymous with Mötley Crüe, much as George Washington’s is to the Revolutionary War or Jesus Christ is to Christianity—each is entwined with the other. Any attempt to explain or discuss one in the absence of the other is nothing short of ridiculous. In such cases the subjects are destined to accept their legacy as inseparable partners. Neil tries mightily to extricate himself from his band mates, and interestingly, in the process, creates some of Tattoos & Tequila’s more endearing passages.

The tone, as set by Neil, is rife with all the do-what-I-want-how-I-want attitude rock ’n’ roll aspires to. As such, it is important to note that the language he uses is equal to the tone and can be coarse at times. This reviewer isn’t particularly offended by it because it is almost expected within the context of the subject matter. This isn’t a story about Pat Boone—enough said?

The initial set up of background detail, where he grew up, what his childhood was like, certain experiences in school—are all requisite to telling one’s life story. But let’s be honest, chances are excellent that a hefty majority of people picking up this book want to read a VH1 Behind The Music version as told by Neil. We can’t help it. Nobody picks up a book to read about the accountant with a family who goes to work everyday for fifty years. We all know someone like that. But if that accountant takes a walk on the wild side, now we’re interested. Walking on the wild side is essentially what Neil lets us in on.

Neil’s vocals growl on many of Mötley Crüe’s songs, but his voice comes across as plaintive and discordant as it plays out in Tattoos & Tequila, which is not entirely his fault. As a reader I found myself stumbling on a number of occasions because of stylistic misgivings which made me pause, even back up and re-read. There were a good number of typos and words left out of sentences as well, but I truly believe that to be a case of the advance copy I received for this review—the publisher sent an uncorrected proof, so typos and such are to be forgiven. I would like to be clear here—style is a subjective matter. Just because a certain writing style or voice doesn’t suit me doesn’t make it wrong, so to that end I can’t disparage the overall presentation. For example, in chapter six Neil begins talking about California weather:

“The air is crisp, the sunsets are killer. While the rest of the country is wearing a winter coat we’re still in shorts and flip-flops.”

Neil confesses very early in the book that he rarely reads due to a bad case of dyslexia. Layer that fact with another: He never graduated from high school. Yet we are supposed to believe that he wrote or spoke phrases like “the air is crisp” and “the rest of the country is wearing a winter coat”? This is hard to believe, and it disrupts the flow of reading—although undoubtedly he would use the word “killer.”

In the very next paragraph he writes something much more within character about his exotic car collection:

“Over the next few years the inventory would reach something like thirty different rides, each one more chill than the next.”

While I may take issue with the use of colloquial language I cannot say I don’t believe he actually wrote that—it is befitting his persona. There is no insinuation of stupidity here, merely a nod toward an element that affects readability.

Another missing element was pictures. I’ve never read any biography or memoir that didn’t contain at least a few images related to the subject. This, too, may be a circumstance tied to the review copy being an uncorrected proof. To publish a memoir, much less one about a rock figure of such repute as Vince Neil, without pictures, would exceed all bounds of reason.

Many people close to Neil were interviewed for the book, and they have their say throughout—mostly ex-wives and old friends. With the exception of Nikki Sixx (Crüe’s bassist) no other band members contributed, and Sixxs’ offering seems more of a public relations stunt than any tender of an olive branch. Interestingly the two seem to share a sibling-like relationship, exposing for us the usually well hidden human heart of such big league bad boys. Staying true to the book’s namesake, the material is centered upon Neil, putting his life onstage; another book exists which speaks toward the band as a whole.

Fans of Mötley Crüe will assuredly delight in the exploits and tribulations of their frontman. This reviewer approached the book with an appreciation and respect for rock-and-roll, not as an indoctrinated Crüe aficionado. From that perspective the content in Tattoos & Tequila is compelling, but the narrative backs up then moves forward again so many times the book should come with its own backup warning device; in places it stumbles while trying to get out of its own way. If you can’t get enough of being backstage with the band, hard drinking, drugs, and sexual conquests—and the compulsory aftermath—then Tattoos & Tequila is a cotton candy trifecta you’ll hungrily consume and then bask in the subsequent rush. Neil appears to reveal more than a modest amount of personal detail, and picks at scabs that have years yet to heal, but the catalogued events presented are, in a number of instances, hard to accept at face value given the contradictory statements given by others.

If you grew up in the 1980s and have a passing interest in getting a peek at the seedy underbelly of the hair metal scene of the day, then Tattoos & Tequila will suffice. However, you won’t find profound analysis or exploration of disaffected youth here. As Neil states many times, he is an entertainer, and as such a reader may turn the last page having been entertained. But if deeper, more focused, enlightenment about his life is what you’re after then you may need to wait for the post-mortem third-party biographies.

Vince Neil’s voice is an impeccable match, a perfect fit, for the legendary hard rock outfit of Mötley Crüe. He is a fantastic presence onstage, and that’s where he belongs—not between the pages of a self-indulgent book.