Taste: My Life Through Food 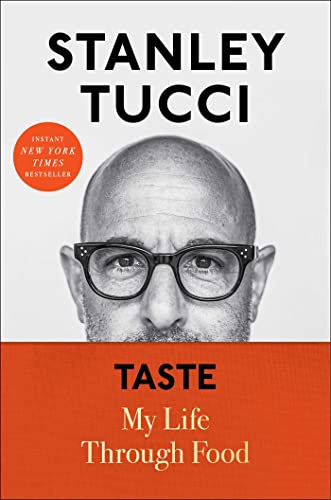 “‘I grew up in an Italian family that, not unusually, put great import on food.’”

Stanley Tucci was born in Westchester County, New York, in 1960, the eldest of three siblings. “I grew up in an Italian family that, not unusually, put great import on food.”

Though the focus of his mother’s cooking was Italian, over the years, she branched out to crepes and paella. Tucci—and childhood friends—loved it all. In school, classmates envied his lunchboxes.

The Tucci family moved to Florence, Italy, for one year in 1973 so Dad could further his studies as an art teacher. Young Tucci adored the savory schiacciata, or flatbread, which he dubbed “the gold standard” afterschool snack.

After college graduation in 1982, he lived in NYC, and nostalgically describes the many greasy spoons and once-famous eateries he frequented, many of which are no longer there. He often addresses the fact that so many excellent landmarks are gone. He states, “we as Americans feel little obligation to preserve what once was . . .”

During college, Tucci worked at Alfredo’s in NYC, where the dish Fettuccine Alfredo originated.

There is a hysterical passage between Meryl Streep and Tucci, (they co-starred in Julie and Julia), during dinner at a restaurant in Normandy where everyone thought they were being served what looked like “horse cock,” and was called “Andouillette,” but was just an off-tasting intestinal sausage.

Tucci had three children with his first wife, Kathryn, whom he lost to breast cancer in 2009. In 2012, he married fellow-foodie, Felicity Blunt (literary agent and sister of actress Emily Blunt), with whom he de-feathered pheasant carcasses early in their relationship. At Ledbury’s in London, “we’d always order the pheasant as a lovely reminder of when, together, we first plucked.” They have two young children.

Most recently Tucci starred in an award-winning food series, Searching for Italy. It was this reviewer’s favorite show during the pandemic. Before the show filmed, he, successfully, underwent treatment for a tumor at the base of his tongue. He needed chemo, radiation, and a temporary feeding tube. For a long while, Tucci could not tolerate food—and he missed it.

Tucci is not only a prolific actor and writer, but his zest for food, travel, culture, and life is contagious. Marvel at how to pair sauces with the correct pasta type, and the history behind many classic dishes.

Simply reading about all the food can cause a food coma. Enjoy colorful accounts of Tucci’s works, often filmed in international locations, where the emphasis is frequently the food along with the locale. Namedropping meeting greats like Sophia Loren and Marcello Mastroianni—you bet!

Interspersed with impressive, international recipes as well as holiday delights (look for the several-paged recipe for holiday timpano), and tasty tidbits in the form of food facts, Taste: My Life Through Food by Stanley Tucci e delizioso!