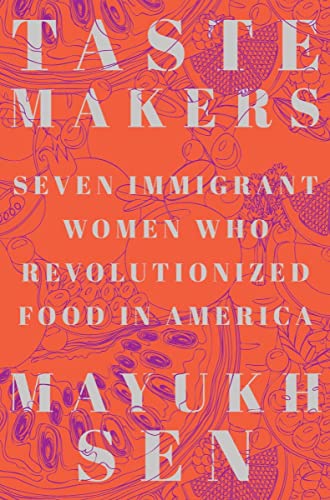 “To read Taste Makers: Seven Immigrant Women Who Revolutionized Food in America is to witness a conversation about these women journeys as immigrants, chefs, teachers, and entrepreneurs over delicate dishes made with love and a great deal of nostalgia.”

In Taste Makers: Seven Immigrant Women Who Revolutionized Food in America, Mayukh Sen honors and amplifies unique culinary voices to bring attention to the role of women immigrants in shaping US food taste. Taste Makers does not contain cooking recipes. Instead, it shows the readers that the food choices available to Americans today are the result of the passionate labor of these immigrant women “who used food to construct an identity outside of their home country.”

Taste Makers is divided into seven chapters, two parts, and an interlude. The book opens with Chang Yang Buwei, born in China in 1889—a fascinating woman who was true to her identity and who found cooking as a way to express herself. She was already a respected medical doctor in Beijing before coming to the US when her husband landed a teaching job in Harvard. But “Buwei’s medical career fell by the wayside due to his constant motion. While she raised her children, she cooked her homeland’s dishes from memory, finding substitutes for unique ingredients and even utensils.

While cooking came effortlessly to her, writing recipes proved a challenge for her basic English skills. One interesting aspect of Buwei’s biography is the conflict between author and translator. Her overbearing husband first, then her daughter translated the book, making her voice almost disappear ono the page. “Even in the noise of positive publicity, the woman behind the cookbook remained a cipher,” Sen writes. Buwei’s contribution is the remarkable adaptation of traditional Chinese recipes to ordinary American kitchens and ingredients. In doing so, she made Chinese cuisine accessible to all of us.

The second biography corresponds to Elena Zelayeta, born in Mexico in 1897, whose greatest contribution to American culinary taste was to develop a method to teach life skills to the blind, and good cooking at that. Zelayeta accepted life’s challenges with stoicism and transformed the devastating experience of becoming blind into an influential and persistent entrepreneurship even through the Great Depression.

The interlude chapter is dedicated to Julia Child and her pivotal role in shaping the food establishment in mid-century America.

Their contributions are significant enough on their own. He does that well, he convinces the reader that these women showed all of us how to cook Peiping roast duck, tamales, guava stuffed chicken, mulligatawny, fried ravioli with crabmeat, among other delicacies. Their books pioneer their specific cuisine in this country, challenging prejudices and overcoming all kinds of obstacles.

Apart from bringing into the light these immigrant women’s struggles to find a sense of purpose, or against the food establishment, or simply to overcome the nostalgia for their respective motherlands, Mayukh Sen also weaves in the history of immigration in the United States:

“In 1965, a major legislative development would change immigration patterns to America for good. The Immigration and Nationality, or Hart-Celler Act eliminated national quotas entirely. It was only a matter of time for Chinese cooking to enter American homes through a new medium . . .”

Most of the challenges these seven women faced are attributed to xenophobia and prejudice more than to their cooking. For example, Najmieh Batmanglij could not find a publisher for her cookbook. “Around the time Hajmieh moved to Washington, American media was rife with images that stoked anti-Iranian sentiment. . . . No wonder US publishers didn’t want to touch Najmieh’s book.”

Their triumph relies on the way they dealt with those challenges.

To read Taste Makers: Seven Immigrant Women Who Revolutionized Food in America is to witness a conversation about these women journeys as immigrants, chefs, teachers, and entrepreneurs over delicate dishes made with love and a great deal of nostalgia.

Buwei, Zelayeta, Kamman, Hazan, Sahni, Batmanglij, and Shirley understood early on the power of alliances in a community dominated by white men, reaching out to academic acquaintances to secure editors, book reviews, and publishing contracts.  All seven women played their cards to the best of their abilities and sometimes paid a high price for their entrepreneurial choices: divorce, isolation, and exhaustion. They all became well known cookbook writers, restaurateurs, and cooking teachers. They gained recognition during their lifetime. Above all they left a legacy of unique flavors to American taste for which we are grateful.