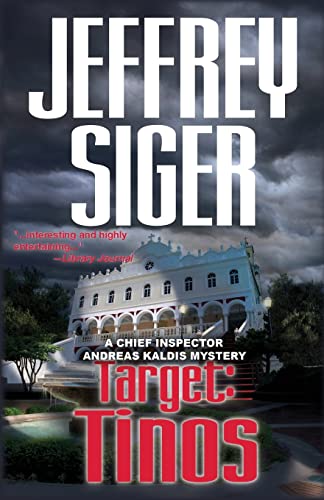 “An authoritative and compelling voice, Mr. Siger is a master storyteller and Target: Tinos is a mesmerizing novel . . .”

On the beautiful Aegean island of Tinos, revered by pilgrims around the world as the Lourdes of Greece, ugly things are happening.

Remains of two immolated bodies, charred almost beyond recognition, are discovered chained together amid bits and pieces of an incinerated Greek flag.

An enraged press and public scream out for justice for the unknown victims, until the dead are identified as gypsies and the story simply falls off the face of the earth.

Is it a gypsy clan war, a hate crime, or something else? With no one seeming to care, the government has no interest in resurrecting unwanted media attention by a search for answers to such ethnically charged questions and orders the investigation closed.

But Andreas Kaldis, feared head of Greece’s special crimes division, has other plans. He presses on in his inimitable, impolitic style to unravel a mystery that yields more dead, a modern secret society rooted in two-hundred-year-old ways, and a nagging suspicion that his answers lay in the sudden influx of non-Greeks and gypsies to Tinos.

It is there, on Tinos, Andreas learns of priceless hoards of gold, silver, art, and precious gems quietly amassed over centuries out of the offerings of grateful pilgrims. He has found a motive for murder and an irresistible inspiration for robbery. All that is left for Andreas to do is find the brutal killers before more die, stop the robbery of the century, deal with Albanian mobsters, the history of Greek independence from Turkey, and his scheming boss, Spiros Renatis, who abruptly orders him to close the entire investigation.

If that isn’t enough to keep him busy, he also has to deal with formidable fiancée Lila, whom he’s due to marry on nearby Mykonos. Lila is outraged that Andrea has left and gone on this case of murder and mayhem, seemingly indifferent to the most important day in their lives.

If he thought the mobsters were tough, he hasn’t seen anything yet when it comes to a scorned Lila (if only temporary). Thankfully, he can depend on his chief assistant Yianni Kouros, and good friend, chief homicide investigator, Tassos Stamatos

Mr. Siger is one of those rare writers whose finger is always on the pulse of modern day upheavals. He is never afraid to tackle and expose uncomfortable subjects—subjects most writers avoid.

Target: Tinos not only captures the fragrance of Greece and the ambience of its fascinating history, but also the souls of its inhabitants.

An authoritative and compelling voice, Mr. Siger is a master storyteller, and Target: Tinos is a mesmerizing novel, authentic in its rendering of places and tongues. All this and a terrific, memorable protagonist. Great summer reading.