The Tao of Twitter: Changing Your Life and Business 140 Characters at a Time 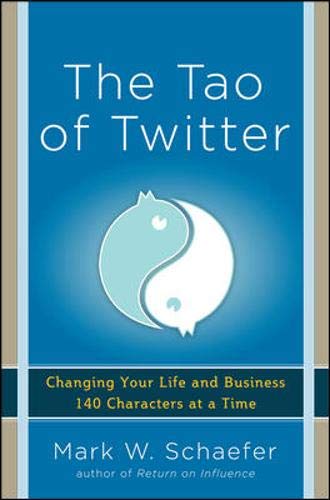 For many, Twitter is the Seinfeld of social networking sites: the one about nothing.

Still there is a lot more to Twitter than constant updates such as, “I just ate a sandwich.” Among other things, it is a powerful tool for business. And this is the real focus of The Tao of Twitter, though the book nominally endeavors to cast a wider net.

Twitter was created by Jack Dorsey. Dorsey first created Blogger, an agonizing start-up experience, but worth the effort, as he sold it to Google for $10 million—not a bad payday. Then he pioneered podcasts. And only after these achievements did he come up with the concept for Twitter, which he refused to sell to the insatiable Google, perhaps wanting to save the full upside for himself on this greatest of his successes.

For many initially contemplating how to effectively use Twitter for business, the site can be perplexing. How do I gain followers? How do I maximize the number of followers? What do I tweet? I’ve got lots of followers and I am tweeting, but no one seems to care. Why?

Mark W. Schaefer, writes in his introduction, “Studies show that about 60 percent of the people who try Twitter quit after the first week, and I’m convinced it’s because they never get past the first set of simple instructions: set up a profile, follow a few celebrities, tweet about ‘what you are doing now,’ and see what happens . . . Problem is . . . the second set of instructions doesn’t exist.”

This is where The Tao of Twitter comes in, explaining how Twitter can be used to benefit businesses both large and small, and yes, other sorts of ventures, too. But don’t expect to come away with a concise list of steps to magically buoy your business because now you know Twitter’s secrets.

Though Mr. Schaeffer notes “ there is a common theme—a success formula of sorts . . . ” there is truly no single method, but rather perhaps some principles that with dedicated, consistent effort can ultimately bear fruit. It is this path, this Tao, which Mr. Schaefer truly seeks to impart. And he does this, by the way, writing in an informal, personal voice that is engaging and clearly steeped in his own experience.

Like other truly honest social networking books, Tao pulls no punches in that it provides no quick-start guide. Sure, it succinctly indicates there are three key ingredients for success on Twitter: “Targeted Connections + Meaningful Content + Authentic Helpfulness.”

But there are a variety of ways of implementing these, and one suspects that each successful tweeter employs a personal formula that is at least slightly unique. This must be the case, as social networking is always about personal connections and engagement, even if connections in some cases are in truth faux-personal.

While the book on the whole has an entirely genuine feel, there is one false note that appears to be the secret untruth of just about every social networking book. It is that a sole proprietor can succeed in social networking to some sort of reasonable extent as part of an everyday work routine.

This is not possible in any corner of the social networking world where unerring focus and on-demand responsiveness are indisputably required. Indeed, the author’s infectious enthusiasm for Twitter would seem to indicate that he is constantly in and out of the site as he sits at his computer or quickly responds to alerts on his smart phone. It’s likely he has tweeted at least several times during the writing of this review.

The guts of this how-to guide to Twitter are indeed contained in the author’s instructions for deploying the key ingredients mentioned above as well as a number of useful related tips for being efficient on the site, information on tools that optimize one’s effectiveness, and even much on Twitter etiquette.

However, as concrete and fairly comprehensive as the author’s instructions are, a key theme that fills the book is a rather conventional one: Get as many irons in the fire as possible. Indeed, Mr. Schaefer relates a number of personal experiences where by effectively utilizing this approach he created highly meaningful connections with other tweeters—relationships that benefitted everyone’s business goals.

Is this the definitive guide to Twitter? It’s not clear that one yet exists. Nonetheless, The Tao of Twitter is about as user-friendly a guide as one is likely to find to get started. But then one must find one’s own path to success, one’s personal Tao.

As Mark. W. Schaefer notes with humility on the last page of the book: No matter how often you return to his volume, “You can’t master . . . Twitter until you immerse yourself in it and learn by doing.”