The Tangled Tree: A Radical New History of Life 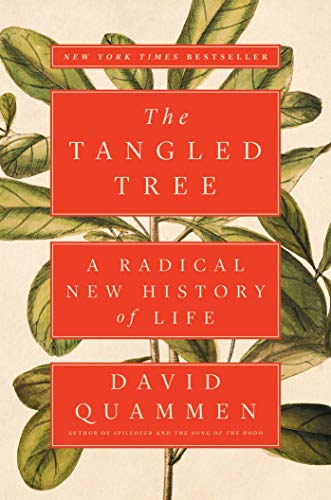 Beneath hooded lids He stares across the apse in Palermo’s cathedral, His face and neck line-etched with suffering, robe draped across His shoulder, one hand outstretched along the curved wall and the other clasping scripture. His hair and lips and garments are stylized but glow with two-and-a-half tons of gold. All around Him are smaller figures of various saints, lit with spiritual passion. This masterpiece of Byzantine art was created in the latter 12th century, a mosaic crafted by artisans imported from Constantinople, innumerable tiles forming a shimmering, sanctified whole.

The American biophysicist Carl Woese believed in some notion of a Creator, if not necessarily Christ, as revealed in The Tangled Tree, acclaimed science writer David Quammen’s thrilling tour de force. Woese, Quammen’s protagonist, wrestled throughout his career with early evolutionary biology and specifically with mosaicism: do species emerge solely through genetic mutation and natural selection—“vertical,” per the legacy of Charles Darwin—or are we all a mélange of DNA from a range of sources, including genes from other species?

Other authors have ventured into this territory recently, most notably geneticists Svante Pääbo, David Reich, Jennifer Doudna, and Nick Lane, and science journalist Carl Zimmer. Quammen’s accomplishment is to deftly unpack the metaphor at the heart of our understanding of evolution: The Tree of Life.

He opens with Darwin’s first twiggy sketch in an 1837 notebook, captioned by a terse I think. Quammen then quickly moves to the latter half of the 20th century and to Woese, a highly respected biophysicist at the University of Illinois, a brilliant if quirky figure who preferred the solitude of his lab to socializing at conferences. He hated to travel. He craved the recognition of his peers, even prizes, but refused to play politics. He trained a generation of evolutionary biologists, serving as co-author on numerous scientific papers, and was adored by those who knew him best; but to the outer world he was stand-offish, given to bouts of petulance.

Woese was drawn to RNA as a key to the genesis of life. Quammen is as his delicious best as he details Woese’s years-long investigation, using technologies that now seem primitive, and focusing on a celebrated molecule, 16S rRNA.

His breakthrough was his Nobel-worthy 1977 discovery of archaea, single-cell organisms that look like bacteria under the microscope, but in fact may be more closely related to sequoias and sharks. (The third domain, eukaryotes, are composed of cells with DNA-rich nuclei.)

His goal wasn’t merely to grasp the earliest phases of life on earth, but also the how, when, and why. His indefatigable pursuit resulted in a scheme he called “the Big Tree,” which rocked the scientific establishment: “Woese was casting down a gauntlet: telling some of the most brilliant and influential figures of late-twentieth-century biology—his friend Francis Crick, Crick’s colleague James Watson, the Nobel winners François Jacob and Jacques Monod and Max Delbrück and Salvador Luria . . . that they were shallow, mechanistic thinkers with no curiosity about life’s history. That they were nothing but code breakers, riddle solvers, and engineers.” In Woese’s mind the Big Tree became his road to Stockholm, an idée fixe that required a theological defense against other theories.

Although controversial, his concept of three domains is still fiercely debated today. But has it affirmed or refuted Darwin? Quammen fleshes out Woese’s work with other research that was unfolding during the same years. Enter evolutionary theorist Lynn Margulis, who had proposed that organelles found in cells—mitochondria, chloroplasts—were once bacteria that had merged with other bacteria, a “horizontal” concept known as symbiosis.

A maverick with no real ties to the scientific establishment, Margulis was discouraged in her efforts: “In lieu of delving into evolutionary genetics,” he writes, “she produced a safer and smaller dissertation on the pond-water microbe Euglena gracilis. If I quoted you its title, your eyes would glaze like a Krispy Kreme donut.” But Margulis’s ideas gained traction, and Woese built on them, with archaea playing a starring role.

From this fertile soil of inquiry sprouted HGT; and since the 1990s data has flooded in to support HGT as a driver of evolution. As Quammen beautifully illustrates, researchers have sawn through the trunk of Darwin’s tree, substituting it with . . . what, exactly? The concluding pages of The Tangled Tree cast around for a better metaphor, such as a “net of life,” with all kinds of interstitial strands, or a net studded with occasional shrubs. HGT has redrawn the map; as Japanese researcher Tsutomo Wantanabe has show, HGT illuminates the genetic prowess of “superbugs,” bacteria that develop antibiotic resistance. Another example: the DNA that codes for placental development originated when the DNA of a virus embedded itself within our genome tens of millions of years ago, giving mammals an evolutionary advantage in the wake of the dinosaurs’ demise.

“The logical conclusion was that genes have their individual lineages of descent, not necessarily matching the lineage of the organism in which they are presently found,” Quammen observes. “‘Each gene has its own history.” How was that possible? Horizontal gene transfer. While the creatures replicated themselves vertically—human producing humans, yeast producing yeast, Haemophilus influenzae producing more Haemophilus influenzae—sometimes the genes went sideways. They had their own selfish interests and opportunities.”

Quammen’s crowning achievement is how he stays true to the complexity of the science while rendering it in a sparkling, supple prose. He’s a Virgil-like guide— clear-eyed and authoritative, with an effervescent humor—through the swirling mists of the distant past. For years Woese resisted HGT but as the evidence mounted he eventually relented.

When he died in 2012, Nobel-less, he had rejected Darwin outright. He’s a poignant character through which to probe the paradigm shifts, and yet mysteries remain to be discovered, as captivating and allusive as the gaze of the mosaic Christ in Palermo. With the elegance and pacing of a literary novel, with awe-inspiring insights throughout, The Tangled Tree ranks among David Quammen’s very best.